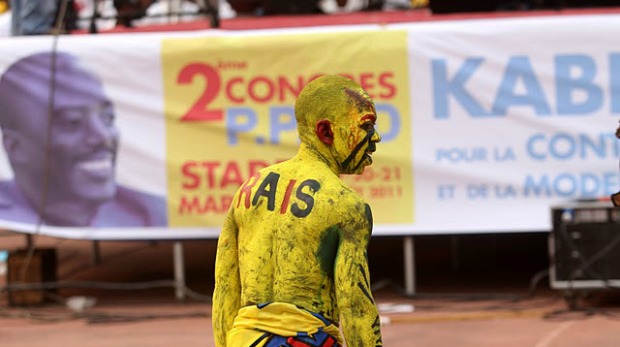 Already delayed from November 2016, the vote rescheduled for December 2018 could mark the most significant political watershed since the presidential and parliamentary elections of 2006. Those polls marked the end of a dramatic decade shaped by complex regional dynamics, local disputes, and inter-state rivalry. Following the genocide in Rwanda, DRC endured two wars (1996-1997 and 1998-2002), with its eastern provinces becoming the frontline in “Africa’s First World War”. This vast conflict expedited the collapse of the state, ushered in a crisis of impunity and imposed inconceivable human suffering.

The 2006 vote was organised by a new electoral management body, the Commission électorale indépendante, chaired by Catholic priest Apollinaire Malumalu. In the first multi-party polls since independence in 1960, Congolese cast votes for a new national assembly and head of state on 30 July, with a presidential run-off held on 29 October 2006.

The victor was Joseph Kabila, who succeeded his father Laurent-Désiré Kabila as president after his assassination in January 2001. In the first round of voting, Kabila led the list of 33 candidates with 45% of the vote. His closest contender was Jean-Pierre Bemba, one of four vice-presidents, on 20%. Although Bemba managed to more than double the number of votes he received in the second round (from 3.39 to 6.82 million), this was not enough to unseat Kabila (who obtained 7.59 million in the first round and increased this to 9.44 million).

Kabila was sworn in on 6 December 2006 as the first elected president of the Third Republic. Although he had stood as an independent, the Parti du Peuple pour la Reconstruction et le Démocratie (PPRD) which supported his candidacy won 111 of the 500 seats in the National Assembly. This was well ahead of Bemba’s rebel-group-come-party, the Mouvement pour la Liberation du Congo (MLC), with 64 seats. Supporters of Kabila formed the Alliance pour la Majorité Presidentielle (AMP), establishing control of over 300 seats. An upper house, the Senate, was indirectly elected by members of 11 provincial assemblies in January 2007, providing the PPRD with 22 of the 108 seats.

Despite his popular mandate, Kabila’s government was slow to repair the damage done to the Congolese state. Delays to security sector reform left the east of the country exposed to the activities of multiple armed groups. Members of Bemba’s MLC resisted their integration into the Congolese army, resulting in violence in Kinshasa in March 2007. Bemba left the country in April 2007 and was arrested by the International Criminal Court (ICC) for atrocities committed in the Central African Republic during 2002-03. He has since been found culpable for crimes against humanity and war crimes committed by forces under his command, and sentenced to 18 years in prison, removing him from the political scene.

Bemba was not Kabila’s only political opponent to be sidelined from electoral competition. In January 2011, the government amended the electoral code to eliminate the need for a presidential run-off. This was ostensibly to reduce costs but clearly benefitted the incumbent. The vote held on 28 November 2011 stood in stark contrast to that of 2006. The sheer scale of electoral irregularities, and the degree to which results were contested, brought the country to the edge of implosion. Kabila won with 49% of the vote, but his closest challenger, Étienne Tshisekedi, leader of the Union pour la Démocratie et le Progrès Social (UDPS) refused to accept defeat and regarded himself as the legitimate president until his death in February 2017.

The 2011 elections should have consolidated a fragile democratic process; instead they demonstrated that the regime’s primary concern was consolidating its power. In recent years, Kabila has attempted different strategies to extend his reign; first by seeking parliamentary approval to amend the constitution in September 2014, and when this ploy failed, to alter the electoral law in 2015. This has given way to glissement, or “slippage” of the electoral calendar, ostensibly on the grounds that the government is not ready to organise elections. This strategy has been underpinned by the acceleration of découpage and the systematic non-disbursement of funds to the Commission électorale nationale indépendante (CENI). According to its constitution, DRC was due to hold elections during 2016, with President Kabila ineligible to stand for a third term. When this failed to transpire, the term of office of the president and parliament expired on 19 December. Fortunately for Kabila, the Constitutional Court had declared that the sitting president would remain head of state until he was replaced by an elected successor.

In September 2016, the regime instigated a national dialogue to establish the political foundations for a transition and an electoral road map.  A first agreement was signed on 18 October 2016, and as a result, opposition politician Samy Badibanga was appointed prime minister and tasked with forming an inclusive government. This surprised many Congolese, who had expected Kabila to reward Vital Kamerhe, president of the Union pour la Nation Congolaise (UNC) for his participation in the process. By appointing Badibanga, an outspoken member of Tshisekedi’s UDPS, Kabila drove a wedge between opposition groups. Another political rival, Moïse Katumbi, a former governor of Katanga who resigned in protest at Kabila’s attempts to remain in power, has been forced out of the country on spurious legal charges.

Divisions among the opposition leaders led to a further round of dialogue convened by the Catholic bishops (under the Conférence épiscopale nationale du Congo, CENCO) and a new, more inclusive agreement signed on 31 December 2016. This included a commitment to hold elections before the end of 2017, and guarantees that Kabila would not stand for a third term or attempt to change the constitution. A few months later, Bruno Tshibala, a close ally of Tshisekedi, was appointed as prime minister.  It became clear that elections would not be held by the end of 2017 as planned.

The government has contained the risk of an urban revolt through maintaining a heavy security presence in major cities. A popular uprising did not occur when Kabila’s term expired in December 2016, despite opposition politicians’ warnings. Instead, 2017 witnessed dramatic developments in rural areas. A local battle to succeed a traditional leader in Lulua Province (formerly Kasaï-Occidental) escalated into widespread violence which affected four provinces, left thousands of people dead, and displaced 1.2 million. The Kasai crisis provided evidence that the Congolese state has evaporated at the municipal level and that the government is unable – or unwilling – to manage local conflicts. It is especially concerning that local power struggles can escalate to such a degree, creating opportunities for manipulation by a range of actors, including army officers and officials at different tiers of government.

In a context where both the presidential majority and opposition are deeply divided, and against a backdrop of previous agreements having gone unimplemented, questions remain as to the feasibility of the CENCO-brokered deal. There are parallels too with Mobutu’s final years: an increasingly unpopular president, opaque political processes, opposition fragmentation, a rapidly deteriorating economic situation, and high inflation. In the absence of a turnaround, the possibility of equivalent levels of plundering cannot be discounted.

The peace dividends since 2000 are at stake, and the possibility of widespread violence remains high. Kinshasa and other cities exude anti-Kabila sentiment. After 17 years in office, many Congolese have come to conclude that he is either not capable, or not willing, to address socio-economic conditions and failures of governance.

In the final months of 2017, developments across southern Africa considerably weakened three of Kabila’s most important allies: Robert Mugabe was neutralised by the Zimbabwean army and succeeded as president by Emmerson Mnangagwa as president. In Angola, José Eduardo dos Santos stood down and was replaced by João Lourenço, who has been quick to disrupt his predecessor’s power base. In mid-December, allies of South African head of state Jacob Zuma were defeated in internal party elections, with the result that he will likely be succeed by Cyril Ramaphosa in 2019, if not sooner. It remains to be seen what impact these changes will have on the Democratic Republic of Congo and president Kabila’s authority.

Kris Berwouts is an independent Congo analyst and consultant. His book, Congo’s Violent Peace: Conflict and Struggle Since the Great African War, was released in July 2017. Kris has worked on central and eastern Africa for nearly 30 years, having studied African languages and history at the University of Ghent. Until January 2012, Kris was Director of EurAc, the European network for central Africa. He tweets as @krisberwouts