Flooding in Freetown: a failure of planning?

According to Shack/Slum Dwellers International (SDI) Freetown is home to at least 61 informal settlements, many of which are perched on the last vestiges of land before the sea. Their names evoke this proximity to water: Kroo Bay, Susan’s Bay, Magazine Wharf and Queen Elizabeth II Quay. 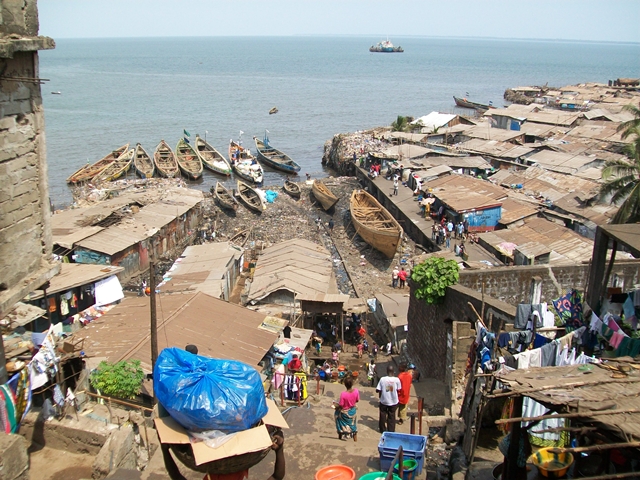 Adjacent to a number of these communities is the orderly, grid-like formation of the central business district. Planned by the British during the colonial period, it remains the city’s hub for both formal and informal trade. Rising behind the congested centre into the hills from which the country derived its name are an increasing number of housing developments encroaching (illegally) further into the Peninsular Forest. “People are building everywhere and anywhere with impunity,” remarked Dr Sama Monde, Director of Conservation Development Services in Sierra Leone, in conversation with ARI; “those who can afford do so, in spite of regulations”.

The forest is disappearing at an alarming rate and the impact on the city is becoming increasingly apparent, and significant.

Freetown may be one of Africa’s more picturesque cities but it is also one of its wettest. In September 2015 flooding on an unprecedented scale killed at least seven people and rendered several thousand homeless. The Wilberforce and Signal Hill areas of the city were affected for the first time in living memory.

Exceptional in their severity and extent the floods may have been, but they were not “unexpected”, as President Koroma suggested when visiting victims at the National Stadium. Increasingly frequent deluges disproportionately affect those living in informal settlements. Kroo Bay, one of the largest coastal slums with an estimated population of 6,000, has flooded every year since 2008. Despite promises from the government that action would be taken, little has been done to tackle the root causes of the problem.

Freetown’s population is now over one million, a tenfold increase since independence in 1961. During the 1990s, many fled towards the capital as civil war engulfed the country. There they began to build on pockets of land previously unused for housing – and the majority stayed. The city extended outwards to accommodate this influx, but it did not do so with any urban strategy or plan in place. Dr Joe Doherty, a geographer at the University of St Andrews, notes “spontaneous expansions are the order of the day. Everyone goes about putting structures virtually anywhere without proper coordination and planning”.

The 2004 Local Government Act placed responsibility for urban planning with local authorities; in the case of Western Area, Freetown City Council (FCC). However, FCC lacks the manpower and technical resources to design and implement an urban development plan. Efforts to “build capacity” have occurred, most notably with the EU funded Freetown Development Plan, but progress is slow. Dr Joseph Macarthy of Njala University, who was a consultant on the EU project, told ARI that within the council there is “a huge lack of understanding of the role they are expected to play in urban planning and its role, more generally, in the effective management of a city”.

Linked to the poor urban planning process is a chronic shortage of affordable housing and land in the capital. Recent estimates suggest a housing deficit of 166,000 that could grow to 280,000 in the next 15 years. Regarded positively, this could provide as an opportunity to create jobs in the local economy – but associated challenges and dangers abound. Houses needed to be built “on grid” with access to basic services such as water and electricity. This process, as the experiences of Nairobi and Accra show, is inherently and deeply political; land is in extremely short supply; and solutions must be found in consultation with local communities.

Informal settlements may fall short when it comes to design, legal status and comfort but they generally tick many boxes that are critically important for inhabitants. They are well located in relation to economic and transport hubs, provide space for home-based economic activities, possess longstanding community support systems and are affordable. Forced relocation is therefore disruptive at many levels. This is not to say that slums provide acceptable living conditions; rather that slum communities exist where they are for a reason. Understanding this is vital if efforts to improve the lot of inhabitants are to be successful.

Part of the Government of Sierra Leone’s response to the most recent floods – forcibly evicting a slum community in Crab Town and moving the residents to an area on the outskirts of the city – demonstrates a deep-seated failure to understand these dynamics. Macarthy believes “it is not a response based on evidence; it has more to do with political point scoring”. A communiqué signed by the Federation of Urban and Rural Poor (FEDURP) and the Centre of Dialogue on Human Settlement and Poverty Alleviation (CODOHSAPA) in Sierra Leone expressed similar sentiment, condemning the “counter-productive demolitions and forced evictions against our communities in cities across Africa”.

Improving the living conditions of “at risk” communities is vital, but the first step needs to be dialogue, not eviction. A new, more inclusive, approach to urban planning is needed, as is closer collaboration between – and within – government departments. The Ministry of Land, Country Planning and Environment (MLCPE) operates in silos at present, with each component – land, country planning and environment – focused on its own, sometimes conflicting, agenda.

In 2012 The Economist wrote “there is little excuse for drifts of rubbish in a city [Freetown] with massive underemployed manpower”. Unfortunately and unnecessarily, this remains the reality today. Youth unemployment is estimated at over 60%. In 2013, a 20 year contract was signed with MASADA Energy to carry out waste management in the city, but waste still piles up on the streets. Some question the capability of MASADA. Dr Monde views waste management as an issue that has been “politicised and very poorly handled”.

The waste issue is multi-faceted. Freetown only has two dumpsites, at Kissy and King Tom, both of which are at capacity and located in residential areas. The Freetown Development Plan recommended the sites be closed in 2009, as they posed significant health risks to communities, and identified new dumps outside the city. These recommendations have not yet been acted upon. Even if waste collection improves, the question of where to dispose of it remains unresolved. 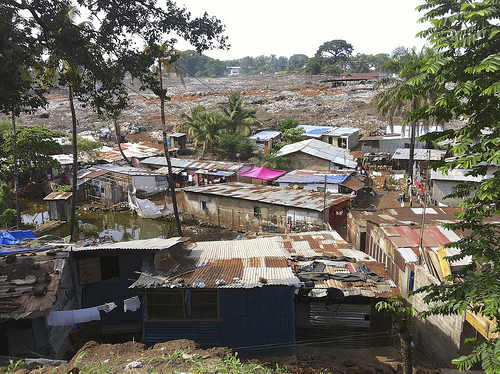 The effect of insufficient drainage provisions in new infrastructure projects such as the refurbishment of Wilkinson Road is exacerbated by the abundance of waste. Drains are perennially blocked by natural and man-made waste. Responsibility for cleaning of the drains is an area of much political debate and little action. MASADA, the Sierra Leone Roads Authority, FCC and MLCPE have all claimed that it falls outside their purview.

During heavy rainfall blocked drains deposit huge amounts of debris – including medical and other perilously unhygienic waste material – in the city’s coastal slums. So flooding brings not only the immediate risk of death and loss of property but also heightened risk of disease. Life expectancy in Kroo Town is just 35: ten years below the national average. 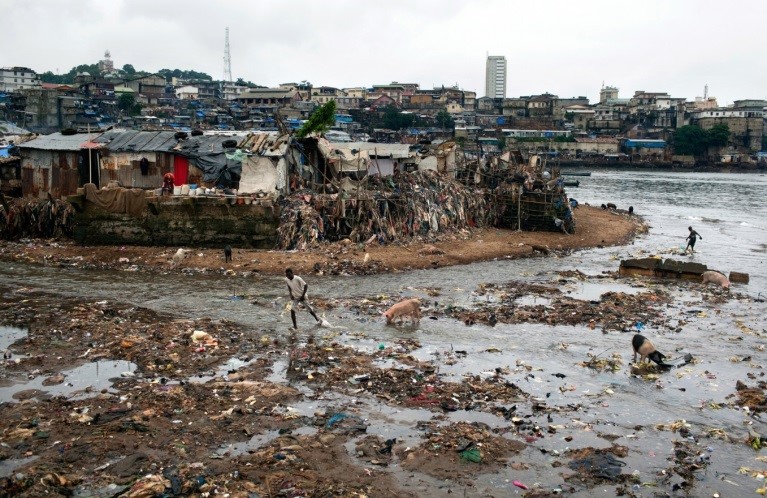 The shore next to Mabella is littered with trash, and untreated sewage flows into the ocean, Freetown, Sierra Leone. Picture by Holly Pickett

Sierra Leone’s Environmental Protection Agency (EPA) has been vocal in recognising the effects that deforestation of the Western Peninsula is having on the city. Soil erosion is just one of the major issues. No longer afforded protection by a canopy of trees, exposed soil is being carried off the hills and down into the city during heavy rainfalls. In September 2015, EPA deputy director Mohamed Bah also commented that “irresponsible actions taken on the hills will affect the city greatly…they impact on its micro-climate”. Many of the houses for which trees are being cut down are built for the country’s elite, suggesting that political will for change may be hard to galvanise. According to Bah, “until we stop dumping waste into drainages, until we stop clearing the trees, we will always face severe consequences of climate change”. 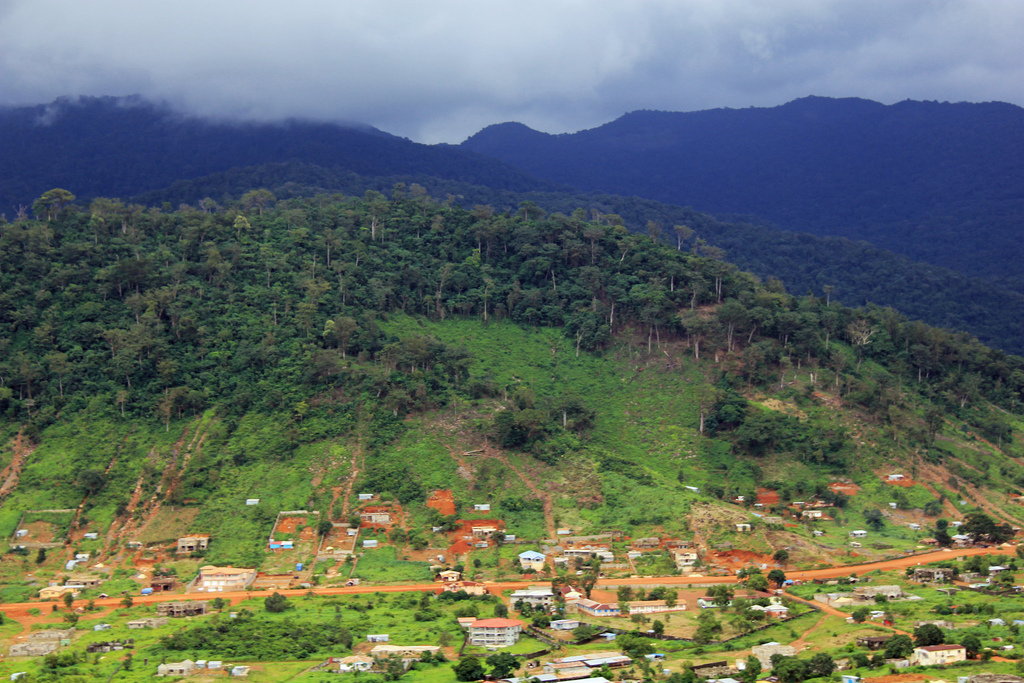 Picture by Joerg Boethling for Welthungerhilfe

Sierra Leone ranks 138 out of 172 in the World Risk Index of countries prone to natural disasters. And research by the World Bank suggests that drier dry seasons and wetter wet seasons are only likely to increase in frequency in coastal cities. This is not good news for Freetown. Already the frequent flooding of August and September gives way to severe water shortages in March. In informal settlements, water pipes are cut as people desperately seek access to this basic service while those who can afford it ‘negotiate’ with Guma Valley, the main water company, to have water delivered to tanks. A seasonal threefold escalation in price is not uncommon.

In 2008, Mary Mye-Kamara, then Director of Disaster Management within the Sierra Leonean government, stated that “massive rural to urban migration in recent years, deforestation and poor drainage makes the city’s coastal communities most vulnerable”. Seven years on questions need to be asked about what is being learnt – and done – by the government for the urban majority.

Developing a long-term plan for the city that is climate-sensitive, addresses waste disposal, appropriately financed and designed in consultation with residents of informal communities should be a priority. The current ad-hoc approach is utterly failing the poorest members of society. “Government recognition of the importance of urban planning is vital. It could acknowledge this by spending more on educating a future generation of Sierra Leone planners,” says Joseph Macarthy (who is himself involved in efforts to teach the subject at Njala University in Freetown).

In the short term, efforts to resolve political wrangling over unblocking drains, to implement and uphold a moratorium on building in the Peninsula forest and to improve weather forecasting could help to protect life and property for those who have little to begin with. Forced evictions, on the other hand, will only foster community resentment and make the long-term planning process more difficult.

Jamie Hitchen is a Policy Researcher at Africa Research Institute.