Kenya: Traditional Medicine and the Law

Kenya’s 2010 Constitution provides the basis for a more intensive and wide-ranging engagement with traditional medicine. After decades of repression and neglect, interspersed with occasional verbal support, Kenya’s authorities are at last actively seeking to modernise and reconstruct both the practice of traditional medicine and the way that knowledge of the subject is used and shared. Translating verbal commitments into substantive policies will take time and sensitivity to local concerns and interests. It will also require continued political will.

The colonial authorities’ 1910 Medical Practitioners and Dentists Ordinance proffered tolerance towards traditional medicine, with significant limitations. The main constraint was that a clear delineation had to be made between Western medicine and traditional practices. Although over a century old, and no longer part of Kenyan law, the ordinance’s linking of traditional medicine to local culture – as opposed to science – continues to shape government engagement.

Colonial era reticence to traditional medicine practitioners hardened during the early independence years. It was viewed as a practice that went against the modernising vision of a new generation of leaders. Medical practitioners were particularly vehement in their opposition, but even President Jomo Kenyatta condemned traditional healers in 1969, describing them as “lazy cheats who want to live on the sweat of others”. These attitudes remain prevalent in contemporary Kenya, particularly amongst medical professionals and the evangelical churches of urban slums that often condemn the practice as ungodly; a view born from their missionary founders who ardently opposed “native practices”.

However, since the World Health Organization’s Alma-Ata Declaration of 1978, which delivered international recognition for the role that traditional medicine and its practitioners can play in primary health care, the attitude has been softening. In 1984, a Traditional Medicines and Drugs Research Centre was established as part of the Kenya Medical Research Institute. More recently, supporters of the sector have looked east, to China, drawing inspiration from a model which has been able to integrate traditional medicine into the formal health care system whilst creating a sizeable and profitable export industry. Yet Kenya has failed to take practical steps to emulate China and has fallen behind African countries like Ghana that have led the way in efforts to integrate traditional healthcare into the biomedical system. 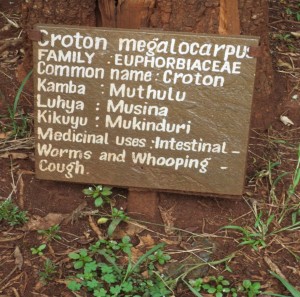 If Kenya is to emulate China and create an industry around the production of herbal medicines it will need to quickly address the issue of sustainable cultivation. Wild harvesting, often viewed as preferable by the healers due to the belief that the herbs are better quality, prevails. A vicious circle is emerging whereby overharvesting in the wild leads to scarcity, which drives up prices, creating incentives to overharvest yet further. With growing demand from sprawling urban centres, the depletion of resources is impacting most on the rural poor – those already poorly served by the formal health care system. Although the great bulk of state health care resources are allocated to the delivery of biomedical care, in rural areas traditional healers are the most accessible health care provider. The doctor-patient ratio in Kenya is approximately 1:33,000; for traditional healers the ratio is 1:950. 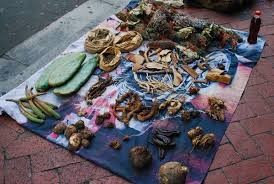 In addition to the challenges of wild harvesting, the reduction of access to what were formerly common lands and forests has hindered herbalists. Kiswahili speakers often say miti ni dawa – “trees are medicine”. Only 1.7% of Kenya’s land mass is forested and 5,000 hectares of it disappears every year. The 2010 Constitution includes a commitment to increase forested areas to 10%, but this will take time and is threatened at the outset by the illegal land grabbing activities of Kenya’s ruling and business elite.
Regulation – for whose benefit?

Traditional healers are subjected to a relatively “light-touch”’ system of registration by the Ministry of Culture. In 2011, it was estimated that Kenya had 40,000 traditional practitioners including herbalists, birth attendants, bone setters and faith healers. Registration is useful for healers in so far as local councils make it a precondition of issuing them with a license to trade. It also helps to deflect corrupt officials seeking bribes and bolsters credibility in the eyes of customers. However, regulation is not accompanied by stringent process. There are minimal checks on both the herbs used and treatment methods employed, although change may be forthcoming in this respect. 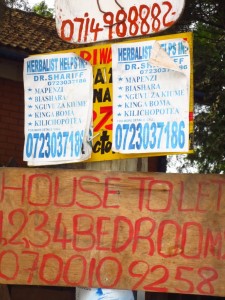 Under the Health Bill being developed within the framework of the 2010 Constitution, a traditional healers’ council will be established, tasked with maintaining a register, licensing practitioners and securing quality control. It will be overseen by the Ministry of Health rather than the Ministry of Culture. A word of caution is necessary, however. Policy prescriptions can take a long time to become reality in Kenya. The 2005 National Policy on Traditional Medicine and Medicinal Plants stressed the need to document the current availability of plants and to promote nurseries and herb gardens aimed at preservation and research. These recommendations have not yet been implemented.
Protecting property

Alongside greater regulation of healers and their plants, there is the need to protect the intellectual property rights of individuals or communities. Kenya’s natural resources have been targeted by international companies seeking inputs for new drug development and other commercial products. In 1995, a German company, Bayer, filed a patent on a process for the biosynthesis of acarbose. It was later confirmed that the process utilised bacteria taken from Lake Ruiru in Kenya. Sales of acarbose were worth US$379 million in 2004, but no benefits were shared with the local community.

Kenya has signed and ratified the 1994 Convention on Biodiversity. Though this recognises the rights of communities over traditional knowledge, it fails to state clearly what powers remain with the state. Furthermore, patent systems favour individuals when knowledge in traditional medicine is often communally produced. Kenya’s Copyright Board, in a recent draft bill based on the National Policy on Traditional Knowledge, Genetic Resources and Folklore, has proposed a system that would put control over the use of traditional knowledge in “local and traditional communities” who may subsequently exploit it for themselves or license commercial firms to do so. In theory this is a positive commitment but definitional challenges around “community” and questions over how to address multiple ownership claims make its practical enactment difficult.
Who will take responsibility?

The last fifteen years have seen private ventures in the production and marketing herbal medicine as well as community projects aimed at protecting local practices. Though impressive these remain isolated. From the government side, a number of policy and legislative initiatives proposed in relation to traditional medical practices in Kenya have fallen short when it comes to implementation. One reason for this failure is that fragmented responsibilities within state structures have generated conflicts of interests between departments and even ministries. A second, according to senior staff at the Ministry of Health, is the inability of the healers themselves to organise into a credible national association that speaks with one voice. This has limited the ability of traditional healers to lobby the government consistently and effectively. Local healers are also anxious that their traditions and expertise will be exploited by the state or private companies with little return to themselves or their communities.

With greater direction from the centre and a more inclusive and sympathetic approach, substantive reform may be edging closer. An estimated 70% of Kenyan’s rely on traditional medicine as the primary source of care, with up to 90% using medicinal plants as part of any treatment process. Complemented by an increasingly supportive regional and international framework, Kenya might at last take action and deliver a “legally regulated, scientifically driven and commercially informed” approach. The 2010 Constitution is clear on the role of “culture as the foundation of the nation” and Article 11 recognises the “contribution of indigenous technologies to national development”. It may be time for that statement to become reality, to the benefit of all Kenyans.