Virtual collaboration: an antidote for low research output in Africa

In March 2016 I attended the Next Einstein Forum Global Gathering in Dakar, Senegal.  It was the first global scientific gathering ever held in Africa, and it was driven by the African Institute for Mathematical Sciences. The event showcased young African scientists who are conducting world class research within and outside the continent, and provided an opportunity to make government officials and investors more aware of the crucial role of science in national development. Workshops were arranged beforehand to facilitate research collaboration between our researchers and counterparts from other parts of the world. It was declared that Africa will be the home of the next Albert Einstein. While such optimism is welcome, there is no cause for complacency.

Africa constitutes 15% of the world’s population but produces only about 1% of scientific knowledge. According to the UNESCO Science Report 2010, Africa has 164 scientists per million inhabitants compared to 656 in Brazil, 4,180 in Europe and 4,663 in the USA respectively.  It is also clear from this report that there is a direct relationship between the availability of scientists and the research output of a particular region. The statistics might make a curious mind ask if Africans are not particularly interested in science, or whether the current research environment fails to actively encourage the acquisition of scientific knowledge.

The promotion of science and scientific research requires very good laboratories and teaching aids in public schools and universities.

The notion that Africans are not interested in science is patently false. However, the lack of support by our governments remains the single biggest obstacle plaguing scientific research output. This may sound like a convenient explanation – “blame the government” – but the truth is that the promotion of science and scientific research requires very good laboratories and teaching aids in public schools and universities. While such facilities exist in pockets here and there, investment in education generally, and in scientific education specifically, is devastatingly low throughout Africa.

Some efforts have been made to improve scientific research output, for example by setting up exchange programmes between our universities and foreign institutions. The impact of such initiatives on total output has been negligible. One explanation for this is that most researchers who travel abroad for training do not return home. The so-called “brain drain” remains acute. More than 300,000 highly qualified Africans live abroad, of whom one in ten have a doctorate. I do not wish to castigate fellow researchers who decide to work elsewhere, simply to emphasise that policy rarely favours the promotion of indigenous research.
Many trained researchers who do return home often leave again, frustrated that their skills cannot be more effectively deployed in their home countries. They seldom find that they are able to apply their skills to solving problems critical to the continent, due to the lack of basic infrastructure, inadequate funding and support, political instability, misplaced government priorities or myriad other reasons. So now we have a scenario where researchers who are trained outside Africa and do not return are likely to focus on research problems that may not necessarily benefit the development of the continent.

How to diminish the effects of brain drain is a topic of frequent and wide debate. I would like to focus on just one associated question. Are there ways of ensuring that scientific researchers trained within Africa are as competent as those trained abroad? I am certain the answer to this is affirmative.

We, as African research scientists, urgently need to remind ourselves of the benefits of collaboration and ask ourselves how we can advance it.

A very good example is the Regional Initiative in Science and Education (RISE), established in 2008 by the Institute of Advanced Study’s Science Initiative Group and funded by the Carnegie Corporation. RISE led to the creation of five research networks throughout Africa. I was a beneficiary of one of these – the African Materials Science and Engineering Network (AMSEN) – and was its representative at the Next Einstein Forum.  The others are the Southern African Biochemistry and Informatics for Natural Products Network (SABINA), the Sub-Saharan Africa Water Resources Network (SSAWRN), the African Natural Products Network (RISE-AFFNET) and the Western Indian Ocean Initiative (WIO). The Pan African Materials Institute (PAMI) at the African University of Science and Technology in Abuja, Nigeria, is another example of an emerging initiative to improve science literacy and reduce brain drain. 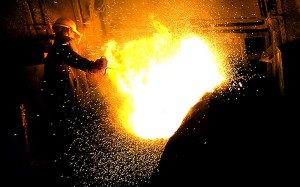 These institutions are providing much-needed support for researchers to solve specific problems confronting Africa.  RISE has enabled the acquisition of state-of-the-art research equipment: the Federal University of Technology Akure, where I completed my Masters, was able to acquire a potentiostat, an optical microscope, a polishing machine and other essential equipment for research in my field, metallurgical engineering. It has also facilitated networking opportunities for researchers that have boosted their confidence in research findings and their contribution to scientific knowledge. Despite these initiatives, research collaboration within Africa is still very weak. We, as African research scientists, urgently need to remind ourselves of the benefits of collaboration and ask ourselves how we can advance it.

The need (and demand) for collaboration

The best approach to problem solving and knowledge creation is multi- and interdisciplinary research. This was acknowledged by the Vice Chancellor of the University of Cambridge at the Next Einstein Forum Global Gathering in Dakar when he said: “Africa’s search for the new Einstein seems to be a misplaced priority because the most efficient way of solving the challenges at hand is through vibrant collaborations”. A typical example is the observation of gravitational waves through the facility called LIGO. Gravitational waves were predicted by Albert Einstein’s general theory of relativity in 1915. One hundred years later, it took around 1,000 scientists from over 130 global institutions to measure these waves. This confirms what can be achieved through collaboration. All continents were represented in this important discovery except Africa. No African university took part. 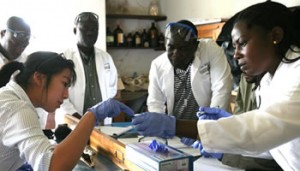 A number of recent articles by African researchers have focused on the imperative to collaborate, but none really address how this can be achieved. Research scientists know all too well about the lack of funding and basic infrastructures, unequal distribution of research facilities on the continent, difficulty in obtaining study visas and expensive travel from one country to another. The prevailing conditions for conferences, workshops and symposiums – where collaboration is often initiated and fostered – are not propitious. But there is a way to counter these hindrances – through virtual collaboration.

My fellow students and I knew that the facilities we needed existed in America, Asia and Europe. What we did not know at the time – because most of the literature in my field is published in American, Asian and European journals – was that South Africa had some of the facilities.

One thing that is striking is the willingness of the research students and their supervisors to pay for conducting experiments.

Today, I am a Doctoral student in the Centre of Excellence in Strong Materials at the University of the Witwatersrand in South Africa. It was not so difficult for me to register for the programme because FUTA and University of the Witwatersrand are both part of AMSEN and I sent my research proposal to potential supervisors in South Africa. I am currently developing less expensive titanium alloys for land-based applications, part of an effort by the South African government to set up a robust titanium industry.

On average, I receive three calls a month from students and lecturers who want to carry out experiments using facilities that are not available in their own countries. Most of the calls are from Nigeria, but also from Kenya and Ghana. Some callers work in the same field as me; others are asking if I know any institution with research facilities for chemistry. Nigerian and South African friends at other universities here tell me they receive similar inquiries. One thing that is striking is the willingness of the research students and their supervisors to pay for conducting experiments. Funding for research in Africa may be inadequate, but it is clearly not non-existent.

In 2015 I attended the African Materials Research Society Conference in Accra, Ghana. There I met with colleagues who are currently lecturing in Kwara State Polytechnic in Nigeria. It was surprising to learn that a state-owned university now has a scanning electron microscope in good working order.  I asked how often they use the microscope and the response was “not very often, because people are not aware of the availability of such a microscope”. Although the microscope is not as powerful as those available in South Africa, good quality images at higher magnifications can still be taken.

Other research institutes in Nigeria have acquired facilities that research students who need them do not know about. A friend of mine working in one of the institutes under the National Agency for Science and Engineering Infrastructure (NASENI) told me about new facilities they have in their laboratories. How many researchers in my field – in Nigeria or elsewhere in Africa – know that NASENI’s Prototype Engineering Development Institute (PEDI) and Engineering Materials Development Institute (EMDI) have a CNC lathe, a CNC laser cutting machine, an Instron universal testing machine, an X-ray diffraction facility and a vibrating sample magnetometer? I only discovered by word of mouth. I also learned from my friend that much of the new equipment is either under-utilised or not used at all.

The major stumbling block is lack of up-to-date and accessible information.

Recently, I had the privilege of assisting my former supervisor at FUTA by commissioning X-ray diffraction (XRD) analysis for him in South Africa. This was much cheaper than if he had come all the way from Nigeria himself. However I subsequently discovered that the XRD measurement could have been carried out at the University of Ghana and it would have cost at least 20% less if the samples had been sent to Ghana rather than South Africa. The irony is that the University of Ghana and FUTA are both AMSEN nodes. The information should have been readily available.

The experiences above have emphasised to me the widespread demand for research facilities, the ability of many researchers to pay for experiments and the ready availability of some of the required facilities within Africa. The major stumbling block is lack of up-to-date and accessible information.

Towards a virtual resource network

All African research institutions have access to the internet, albeit at varying speeds and cost.  Academic “aggregator” websites exist, such as researchgate.org and academia.edu. So why not create an online platform to which research institutions can upload a list of their facilities with details of their availability, costs for use and the person responsible for the equipment? In this way,

Finally, a virtual network of research facilities would make the organisation of intra-Africa conferences and scientific events to influence government policies more straightforward and more likely to yield results.

The virtual network I propose sounds simple enough. Implementation is more problematic. A commitment from all universities and other research institutions to provide up-to-date information about their research facilities and equipment would not be easily realised. But it is possible and necessary. We can either continue to bemoan the state of scientific research in Africa, complain about the lack of government support and hope for generous assistance from abroad. Or we can start to address the problem by collectively making the most of the research facilities and expertise we already have.

Michael Oluwatosin Bodunrin is a PhD student in the School of Chemical and Metallurgical Engineering at the University of the Witwatersrand, South Africa.

Any institution interested in assisting to set up – or host – a virtual network of African scientific research facilities can contact Michael Bodunrin through: Edward Paice, Director of ARI [email protected]