The August 2016 municipal elections will be the most competitive to date. As outlined in a new Briefing Note, the African National Congress (ANC) faces a challenge in four of the country’s eight metropolitan municipalities, or “metros”. The Democratic Alliance (DA) and Economic Freedom Fighters (EFF) could keep the ANC below 50% of the vote in Nelson Mandela Bay, Tshwane, Johannesburg and Ekurhuleni. In the event of “hung councils”, how these three parties approach coalition government will be crucial.

The ANC is unquestionably the dominant force in South African politics. However, as a strong incumbent, it has comparatively little experience of making concessions or sharing power in sub-national government. The ANC has been used to winning elections – and by a considerable margin.

Its arch-rival, the Inkatha Freedom Party (IFP), governed KwaZulu-Natal (KZN) province and numerous municipalities for a decade following the end of apartheid in 1994. The ANC eventually neutralised the IFP by courting traditional leaders and forging an alliance with the break-away National Freedom Party.

In Western Cape, the ANC took a similar period of time to regroup after it lost the City of Cape Town to the DA in 2006. Local ANC members have shown an increasing desire to cooperate with smaller parties, leading a coalition in Cape Agulhas, and running minority governments in Kannaland and Prince Albert. By contrast, in Oudtshoorn, the ANC struggled to maintain control of the municipality, which has now been placed under the administration of the provincial government.

During the same period, the DA gained a record of winning control of councils by squeezing smaller parties or forging local coalitions based on a clear programme. The party negotiated an extraordinarily ambitious deal to win its first metro in March 2006 and subsequently merged with its local rival, the Independent Democrats.

United in opposition
Across South Africa’s eight metros, the DA currently controls 507 of 1,414 council seats, while the ANC has 794. The official opposition has reportedly held preliminary discussions with smaller parties, including the EFF, United Democratic Movement (UDM), African Christian Democratic Party (ACDP) and Congress of the People (COPE). A DA–ACDP coalition runs the council in Swellendam, while the DA and COPE jointly administer four municipalities.

The EFF’s “commander-in-chief” Julius Malema has stated, “We want a coalition of the opposition and not just a coalition with the DA. We will not go into a coalition with the ANC because we will be undermining our people”. The Fighters appear inclined to support a minority government in return for a quid-pro-quo in another municipality where it is on the verge of winning control of the council. In the words of EFF secretary-general Godrich Gardee:

It means that party will be given the positions of mayor, the deputy mayor, the speaker. We hand over all the rights and become an opposition there so that the voters can speak to you when you fail to deliver services.

Given the absence of ideological overlap, such a confidence and supply arrangement might work for the DA better than a formal coalition with the EFF, particularly if premised on a nationwide deal. Party leader Mmusi Maimane emphasised, “We don’t stand for the same things”, and insisted that the DA would not govern with any political party that “mobilises on the basis of race”. His predecessor, Helen Zille, was similarly resolute ahead of national and provincial elections in 2014, stating that the DA “will not enter into a coalition with the EFF under any circumstances”.

In the metros, governing partners would divide the positions of executive mayor, speaker, and chief whip, as well as 10 portfolios on a mayoral committee. This contrasts with smaller municipalities using the collective executive committee system, where all parties must be fairly represented on the executive committee, from which one member is nominated as mayor.

The battle for the Bay
Top of the DA’s hit list is Nelson Mandela Bay (NMB), which includes the city of Port Elizabeth and industrial towns of Uitenhage and Despatch. According to the most recent State of South African Cities Report, only 19.7% of local residents have matriculated and 6.8% have pursued higher education. The metro is known for manufacturing, but one third of its inhabitants are unemployed. The 2011 census found 29% of NMB to be living below the poverty line, while a township in Port Elizabeth was identified as the worst informal settlement in the country.

The ANC and DA won all ward seats in 2011, but the ultimate composition of the council is based on proportionality, making vote share important. The latest eNCA-IPSOS opinion poll showed a 42% approval rating for the DA, with the ANC on 28%. Yet, with 16% of voters undecided, the outcome is unclear.

The ANC has moved to buttress its position in the metro, installing as mayor Danny Jordaan, a local figure who masterminded the country’s FIFA World Cup bid. Jordaan has transformed municipal finances, establishing a R1.8 billion surplus in a metro which his opponent, the DA’s Athol Trollip, claimed was on the verge of bankruptcy.[i] NMB had incurred R1.3 billion of irregular expenditure in 2014/15 and R432 million of fruitless and wasteful expenditure – equivalent to 42% of the national sum.

Despite the turnaround, the ANC could only half fill a 46,000 seater stadium in Port Elizabeth for its manifesto launch. President Jacob Zuma is extremely unpopular in the metro and low turnout among traditional ANC supporters could cost the party control – as could votes cast in protest for the EFF.

The left is no longer homogeneous. The Congress of South African Trade Unions (COSATU) – which is aligned with the ANC – expelled the metro’s largest labour movement, the National Union of Metalworkers of South Africa (NUMSA), in November 2014. COSATU’s former general secretary Zwelinzima Vavi had kept organised labour in check, but his dismissal in March 2015 has left the ANC disconnected from workers in the city. A NUMSA-aligned United Front could draw votes away from the ANC in voting districts where it has usually won considerable margins. 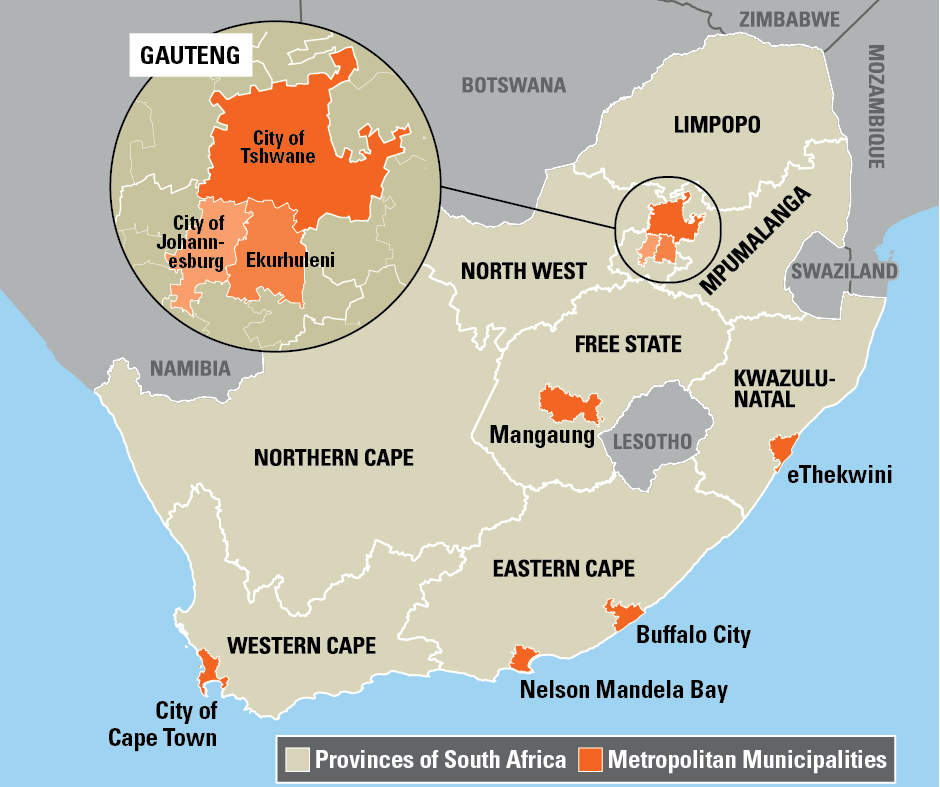 Going for gold
In Gauteng, as in the Eastern Cape, it is an increase in political pluralism and the prospect of parties cooperating that might drive the ANC from power. As a springboard to national office, Gauteng represents a huge political prize: 23.7% of the electorate reside in the province, making it more populous than Mpumalanga, Free State, North West, and Northern Cape combined.

Yet, the relative strength of the provincial government compared to the municipalities means that voters may be less easily mobilised for local elections. Only 56% of registered voters turned out in the 2011 municipal ballot, compared to 73% in the 2014 provincial polls. The success of an opposition “get-out-the-vote” operation could determine the outcome.

At a seminar, Jonathan Faull observed that the urban electorate is willing to split their votes. Some 173,448 fewer ballots were cast for the ANC in the 2014 election for Gauteng province than the party received in the national race. Of these ballots, 23% were used to endorse the DA. Split-ticket voting may be replicated for PR and ward councillors in 2016.

The DA is relentlessly targeting the Gauteng metros – Tshwane, Johannesburg and Ekurhuleni – hoping to add to its representation in Midvaal local municipality. However, the party has been criticised for its rush to secure high-profile mayoral candidates. On the campaign trail, Herman Mashaba, a self-made businessman, and Ghaleb Cachalia, the son of two ANC struggle veterans, have come across as underprepared for frontline politics – let alone running Johannesburg and Ekurhuleni, respectively. Some wonder whether the DA has not learnt the lessons of its 2014 attempt to recruit Dr Mamphela Ramphele, a former vice-chancellor of the University of Cape Town with impeccable struggle credentials but zero political acumen.

City of Tshwane
The DA’s candidate for mayor of Tshwane, Solly Msimanga, is more likely to resonate with local voters. He has benefited from the ANC imposing Thoko Didiza on a divided local party following a wave of unrest. A July poll showed a 40% approval rating for the DA, ahead of the ANC on 23% and the EFF on 13%, with 14% of respondents undecided.

A hung council would be symbolic of national divisions, because Tshwane includes the seat of national government in Pretoria. The State of South African Cities Report notes that 20% of the metro’s population live below the poverty line and at least 24% are unemployed; 17% of residents do not have their refuse removed by the municipality, while 11% lack access to piped water.

Townships in the city could endorse the opposition, while settlements built under the ANC remain loyal, posits the Mapungubwe Institute for Strategic Reflection, a Johannesburg think tank. The EFF could win ward councillors to the west of the metro in Atteridgeville and Saulsville, in central Pretoria and in Mamelodi to the east of the capital. In 2014, the party took 11.5% of provincial ballots, behind the DA on 33.8% and the ANC with 49.3%. The EFF’s relatively high vote share cost the DA, which had received 38.7% of the vote in the 2011 municipal elections, behind the ANC on 55.3%.

City of Johannesburg
Service delivery is generally better in Johannesburg than Tshwane, but both are afflicted by comparable levels of inequality, poverty and unemployment. The DA won 32.4% of the provincial vote in 2014, behind the ANC on 52.3%. At the 2011 municipal elections, the ANC won 59.3% compared to 34.4% for the DA.

July opinion polls showed the DA on 36%, ahead of the ANC on 31%; however, 14% of voters were undecided. Crucially, when it comes to coalition-building, incumbent mayor Parks Tau is more popular than the DA’s candidate, Herman Mashaba.

The EFF does not strictly have a candidate for mayoralty, but leading its campaigns is Floyd Shivambu, the party’s deputy president. If the Fighters win more than 10% of the vote, he could emerge as kingmaker. Due to population spread, the EFF stands less chance of electing ward councillors in Johannesburg; but support among Sepedi-speaking South Africans could bolster the PR vote.

Ekurhuleni Metropolitan Municipality
This is the metro where the EFF might make the biggest impact nationwide. Only 8.6% of residents have pursued higher education and nearly 25% live in informal settlements, according to the State of South African Cities Report.

The DA will be hoping that it can muster 35% of the vote, and see the EFF reach 15%, so that collectively the two parties could deprive the ANC of an absolute majority. Even if that was to pass, assembling a grand coalition would be necessary to keep the ANC’s candidate, Mzwandile Masina, from entering the mayor’s office.

Demographics point to the Fighters winning a handful of ward councillors in the north of the metro. Tembisa had promised to be the party’s beachhead until two EFF cadres were attacked while campaigning door-to-door and subsequently died in hospital. Malema’s attempts to mourn with the families were met with hostility by ANC cadres.

Such intense contestation does not bode well for an EFF–ANC coalition on the East Rand. As in the other metros, hung councils may provide the Fighters with the opportunity to influence the future direction of municipal government in South Africa. Whether they progress from being a party of protest to implementing policies remains to be seen.

[i] At the time of writing, 100 South African Rand was equivalent to US$7