Shortly before 4pm on Saturday 20 February, Dr Badru Kiggundu, chair of Uganda’s Electoral Commission (EC), announced the result of the country’s presidential election. It was the third such contest he had overseen. Kiggundu fulfilled his legal obligation to declare the results within 48 hours of the polls closing and, to no great surprise, they confirmed a five-year extension to President Yoweri Kaguta Museveni’s 30 years in power. Museveni, with 60.75% of the vote, defeated his long-term rival Dr Kizza Besigye for the fourth time, although Besigye’s 35.37% of the vote equalled his previous best performance in 2006. In the end, the 2016 election proved to be a two-horse race. Some had expected Amama Mbabazi, who ran as in independent after splitting from the ruling National Resistance Movement (NRM), to do well but the former prime minister came a distant third, securing just 1.4% of the vote.

The EC results showed that Besigye won in 14 of Uganda’s 112 districts, almost three times the number he secured in 2011. In the capital, Kampala, he took 65% of the vote; but Museveni dominated the rural areas, winning over 90% in five districts. When the results were announced the returns from 1,787 polling stations, more than 6% of the total, were missing. Kiggundu cited his legal right under Article 103 (7) of the Ugandan constitution and section 57 of Presidential Elections Act 2005 to announce the winner, explaining that the omitted votes would not change the overall outcome. However, they could have altered the margin of victory. Uganda’s religious leaders condemned Kiggundu’s action, stating that overlooking results called into question the credibility of the entire process.

Three days later, on Wednesday 23 February, revised results which included a further 605,249 votes from 1,658 polling stations were released. The returns from 129, the balance, were annulled. Although this showed little change in the overall result – Museveni’s vote share dropped by 0.14%, Besigye’s increased by 0.24% and turnout rose to 67.6% – the fact that the “missing” returns were announced indicated transparency on the part of the EC. Suspicions had been raised that they were proof of a deliberate ploy to boost the incumbent’s margin of victory. Almost a third of the polling stations were in three districts won by Besigye – Rukingiri, Wakiso and Kampala. As Yasiin Mugerwa of the Daily Monitor told the author, ignoring them would have been “demoralising for people that went to vote – to know that their vote never determined anything that it didn’t matter despite queueing for so long”. 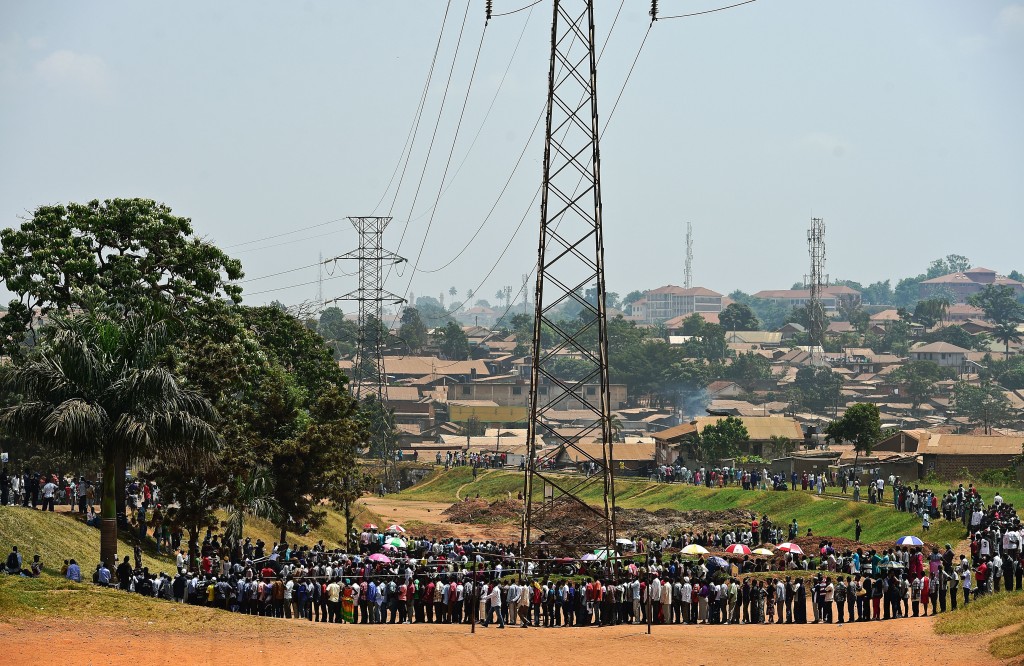 On polling day, voting was scheduled to take place between 7am and 4pm, one hour less than in 2011. Fears that a new biometric voter verification system would cause significant problems proved unfounded, but three-quarters of polling stations failed to open on time. Across much of the country, voting did not get underway until a couple of hours after the scheduled start time. In the districts of Wakiso and Kampala – home to more than 10% of the registered electorate – many polling stations were still not open by early afternoon. Former Nigerian president Olusegun Obasanjo, head of the Commonwealth Observer Group in Uganda, described these delays as “inexcusable”.

“Logistical challenges” in the disbursement of materials were behind the delays, according to the EC, although these challenges have yet to be explained publicly. In Kyenjojo, ballot boxes and papers arrived at the district headquarters at 3am, just four hours before voting was due to start. A general lack of trust in the EC meant that many voters viewed delays and other problems through a political lens. “In some polling stations within 4km of the headquarters of the Electoral Commission, voting started as much as five or six hours late. This led to suspicion by voters – and statements by party leaders – that the flaw was a ploy by authorities to disenfranchise predominantly opposition voters”, wrote Richard Kavuma, editor of The Observer.

Even though the EC did eventually relent, apologise and allow polling stations affected to stay open until 7pm, its officials communicated this message poorly. Aside from anecdotal evidence it is impossible to say whether, or how many, Ugandans were disenfranchised by delays and long queues. However, it should also be noted that in districts where a high proportion of polling stations opened late – Jinja, Kampala, Rukingiri and Wakiso – turnout was actually higher than in 2011, broadly following the 8% national increase.

Yasiin Mugerwa asserts that the National Tallying Centre in Kampala served primarily as a “receiving of results centre”, with no checks being introduced to ensure district data entered into the system matched announced results – a necessary measure to avoid deliberate malpractice and human error. In response to growing calls for greater transparency, on 25 February the EC published the final results online for all polling stations in the country, allowing individuals who observed counting at a particular polling station to reconcile the figures with their results. According to the list at least, 28 polling stations recorded 100% turnout with all of the votes cast in favour of Museveni. Although 9,181 votes are not going to have an overall bearing on the result, such results do call into question the credibility of the EC.

Tallying of results was an area of concern identified before the election by the Forum for Democratic Change (FDC). It sought to run a concurrent counting process using declaration of results forms from party agents in polling stations across the country. However, on 19 February police stormed FDC headquarters in Kampala, putting a stop to this initiative and removing materials. The raid was justified by police on the grounds that the EC is the only body legally mandated to announce results. The FDC’s motivation was not only lack of trust in the EC but to seek evidence for a possible court challenge which had to be filed within 10 days of results being announced. That deadline has now passed without a formal FDC complaint. Having been frequently detained and arrested since the election, Besigye may now be given greater freedom.

Concerns about the EC’s impartiality are nothing new in Uganda. Kiggundu, appointed to his position by the president in 2002, is widely regarded as an ally of Museveni although he has vehemently denied this. The commission oversaw elections in 2006 and 2011 which were marred by accusations of fraudulent activity. In 2006, Besigye challenged the results in court. The Supreme Court ruled 4 to 3 against him. In 2011, he vowed never to compete again whilst Kiggundu remained at the helm of the EC.

Between 2011 and 2015, Ugandan civil society and political opposition parties carried out nationwide consultations to put together a package of electoral reforms. They argued that the commission ends up working for and at the behest of the ruling party and the president. In February 2015, 43 reforms were agreed on by the Inter-Party Organisation for Dialogue. They included a statutory body – rather than the president – to appoint electoral commissioners for one non-renewable term, an increase in the number of commissioner from seven to nine and the inclusion of opposition representation. However as in 2010, the proposals were largely ignored and a Constitutional Amendment Bill was passed in August 2015 which included no significant reforms, putting an end to opposition efforts aimed at overhauling the entire electoral body.

By 2021, when Uganda is due to hold its next presidential elections, there will be a new head of the EC. Kiggundu, along with several other commissioners, has confirmed his intention to stand down in 2017, having served two seven-year terms. Even if major reforms are not introduced, a new commissioner could do much to improve the transparency and credibility of the commission. In Nigeria, Prof. Attahiru Jega was, over the course of two elections, able to bring credibility to Nigeria’s electoral management processes. Despite being appointed by President Goodluck Jonathan, Jega refused to buckle under heavy pressure and oversaw an opposition victory for the first time in Nigeria’s democratic history. This might be difficult to replicate in Uganda, which has never had a peaceful transfer of power, but improved perceptions of the EC could do much for institutional credibility.

Since 2001, elections in Uganda have been characterised by a “Besigye vs. Museveni” narrative. It is possible that the next presidential election in 2021 will be noteworthy for the absence of both men.  In 2011, Besigye promised to stand aside and allow someone else to run – only to return in 2016. But he is unlikely to try for a fifth time. Museveni is – for the moment – unable to run due to a constitutional provision that Uganda’s president must be under the age of 75 when elected. He will be 76 in 2021.  Of course, constitutional obstacles have not proved insurmountable to Museveni in the past and all eyes are already watching for the tabling of the required reform in Uganda’s 10th parliament. If the president chooses not to run, there may still be a Museveni on the NRM ticket in 2021. His wife and son are both rumoured to be possible successors. A succession candidate might provide Uganda’s opposition with its best chance to break the NRMs grip on power.

In his post-election press conference Museveni, responding to international criticism of the polls, declared that he did not need lectures telling him how to run elections. He certainly does not need any advice when it comes to winning elections and his performance hinted at undue influence in the mechanics and management of the electoral process. If Uganda is to avoid another polarising election in 2021, one essential ingredient will be an electoral commission willing to learn from past mistakes (and capable of doing so). All Ugandans deserve as much.

Jamie Hitchen is a Policy Researcher at Africa Research Institute and authored our publication “Steady Progress? 30 years of Museveni and the NRM”