Co-option and cabinets in Uganda

For those unfamiliar with the way politics works in Uganda the decision of President Yoweri Museveni to include three opposition figures in his new – and vast – 81 member cabinet in May might have come as a surprise. But Museveni is a shrewd political operator and this tactic of opposition co-option is one that his regime has used regularly since it came to power in 1986. He was once quoted as saying “the government is like a railway station, there are always arrivals and departures but the railway station remains”.

In 2016 Beti Kamya, president of the Uganda Federal Alliance (UFA); Florence Nakiwala Kiyingi, the Democratic Party (DP) Member of Parliament (MP) for Bukoto East; and Betty Amongi, the Uganda People’s Congress (UPC) MP for Oyam South were appointed to head the ministries for Kampala, youth and lands respectively. The trio have joined an ever growing list of imports to the NRM that includes Rubaramira Ruranga, a staunch Forum for Democratic Change (FDC) member who crossed to the NRM citing its agenda on the fight to tackle HIV/AIDS and “internal chaos” with the FDC; Nasser Ntege Ssebagala, a former DP mayor of Kampala; and Aggrey Awori, a former presidential aspirant and previously vocal critic of the regime – to name just a few. The three latest recruits will no doubt be seeking to avoid the fate of others who have faded into political oblivion once their usefulness to the regime expires. 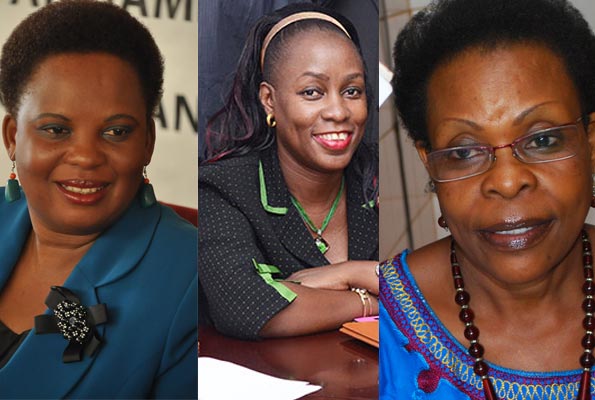 The official narrative of the government draws on the rhetoric of “inclusion”, evoking memories of the “movement cabinet” of the late 1980s and 1990s. In that period, high-ranking opposition politicians were incorporated into an umbrella government, without necessarily changing their party affiliations. The structure was supposedly designed to bring in all shades of political opinion and reunite the country following decades of turbulence. Yet inclusivity soon evolved into an ideological mask for the NRM’s one-party rule, which has continued uninterrupted to date.

Despite the formal opening up of political space in 2005, multiparty competition has not been allowed to flourish in Uganda. This makes it increasingly hard for many Ugandans, particularly urban youth, to be convinced by the NRM’s cross-party political appointments. While co-opting opposition figures does still enable the regime to project a semblance of popular legitimacy, and to give the appearance of a government open to dialogue, the NRM dominates the legislature in Uganda, with over 2/3rds of MPs on their side (the number required for any constitutional amendments).

The recent efforts to create an impression of diversity are an attempt to shore up credibility that was damaged by the recent electoral process, which was marred by state violence and fraud. Moreover, choosing candidates like Kiyingi, a Kampala MP, and offering portfolios that are heavily youth and urban focused – the sections of the population where the NRM performed most poorly during the election – can be seen as an attempt to appease these voters. The appointments are also useful to the party, in the sense that they could be used to shift the blame for government failures onto the opposition.

Additionally, co-option has long been used to fragment the opposition, by sowing seeds of discord and suspicion. Ahead of the 2016 elections, for example, The Democratic Alliance tried, and failed, to put forward a single candidate to challenge Museveni. One factor undermining its efforts was the suspicion that some politicians and smaller groups in the coalition were NRM “decoys”, a theory given credence by the defection of Gilbert Bukenya from the alliance.

So why be co-opted?

Smaller parties, or even factions of them, sometimes rely on co-option to secure financial support. UFA has no seats, UPC has 6 seats and DP has 15 seats in the 10th parliament – a combined total less than both the number of FDC MPs (37) and independent MPs (59). In Uganda, the commercialisation of politics is evident both in the day-to-day running of government affairs and during election periods. Aided by exclusive access to state funds, Museveni’s party is in a position to neutralise criticism and maintain the façade of inclusiveness by buying political support. Despite its overwhelming dominance in the parliament, the NRM organises frequent retreats – at which it is not uncommon for money to exchange hands – to court the support of parliamentarians. Politics has become a lucrative business for those who side with the state. This is particularly important in an environment where many MPs run up substantial debts when campaigning to win a term in office.

Co-option is sometimes used by those in smaller parties as an opportunity to take revenge against their opponents or settle personal scores. During the 2016 election campaign a faction of the UPC led by Jimmy Akena was rumoured to be in talks aimed at striking a deal with the NRM, a move that was clearly an effort to undermine a rival faction of the party led by Olara Otunnu. According to Africa Confidential, “outside the FDC, Museveni is weakening regional parties by co-opting their leaders”.

There are a few politicians who have consistently resisted being brought (back) into the NRM fold. Four-time presidential candidate Kizza Besigye, a NRM “historical”, has maintained fierce opposition to the regime for almost two decades. It is fair to say that his credibility as a politician has been built on this sustained opposition and that his popular grassroots support would be severely diminished by rejoining the NRM fold. Kampala city’s Lord Mayor, Erias Lukwago, has also rejected the enticements of the NRM, most likely because he is increasingly seen in the opposition as a potential replacement for Besigye. Lukwago spent the 2016 election campaign traversing the country with Besigye’s campaign team. These two men are exceptions: not many opposition politicians turn down the NRM, as previous defections have shown.

For a regime that is increasingly facing questions about its legitimacy, the efficacy and sustainability of co-option as a tool of political control should not be overemphasised. For one thing, against a backdrop of worsening economic conditions, “inclusive” politics has become very expensive for the state and the NRM. Uganda has over 400 MPs who in addition to receiving an annual salary of US$ 70,000 benefit from a medical allowance for treatment abroad, a retirement package and sundry other perks. Most recently, debate has focused on the US$18.1m alleged to have been set aside to buy cars for legislators. More importantly, it would be unwise to assume that ordinary Ugandans will tolerate indefinitely a political class which seems to be more interested in serving itself than its constituents.