Museveni’s misdirection: Reading between the lines in Uganda

On 12 July Ugandan social media was preoccupied by an image of the country’s long-serving president, Yoweri Museveni, seated in a slightly dilapidated chair by the side of a road in the western district of Isingiro, making a phone call. His heavily militarised convoy was parked up behind him. The image was a striking one and it spawned numerous memes. A hashtag – #M7Challenge – encouraged Ugandans to take photos of themselves making calls seated by the roadside. A debate started about who could be important enough to make the president stop to take a call and whether he was actually making a call at all.

This was undoubtedly a diversionary publicity stunt – the picture was first tweeted by Museveni’s press secretary. The same day, Kizza Besigye, long-term political opponent of Museveni, was released on bail by Uganda’s High Court. Under house arrest or in prison since the announcement of election results in February, Besigye was (not for the first time) charged with treason in May after holding a concurrent presidential swearing-in ceremony as part of his defiance campaign.

The president’s antics succeeded, at least partially, in distracting media attention from Besigye’s release. Local newspapers, apart from the government-leaning New Vision, had Besigye on their front pages. But the BBC, The Guardian and Quartz prioritised coverage of Museveni’s roadside call and the social media response, paying little heed to Besigye’s plight and upcoming trial until after a press conference called by him the following day. 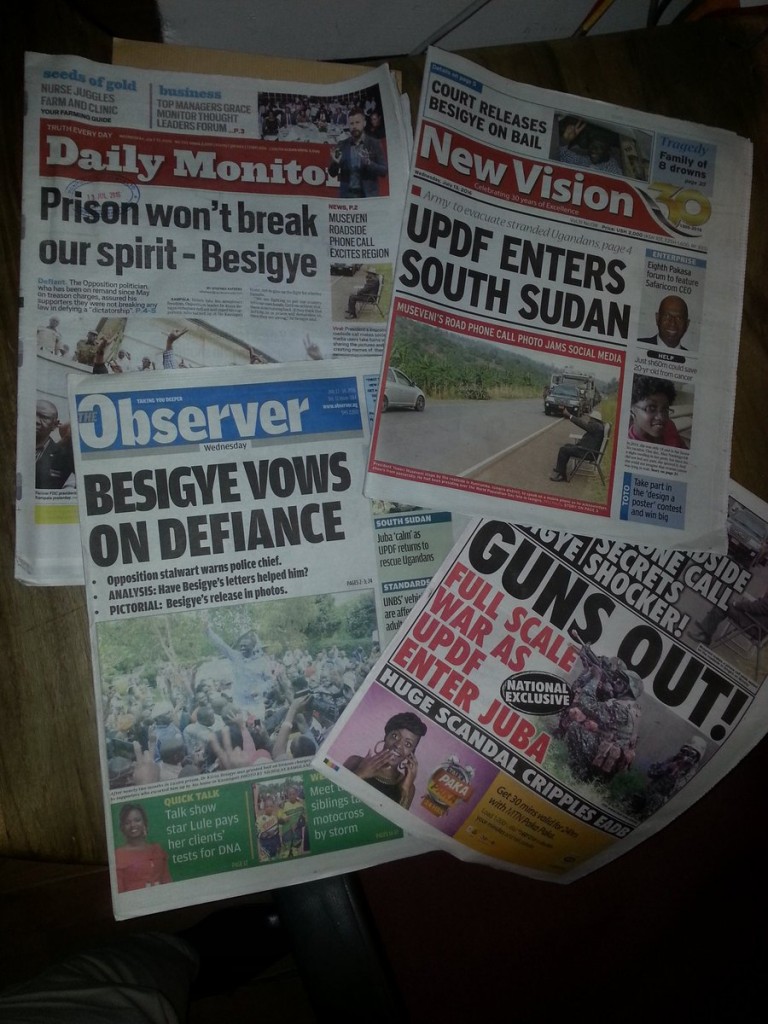 Uganda’s president is a savvy political operator. He has been able to stay in power for 30 years partly because he remains popular in rural areas; partly through his use of force and manipulation of democratic institutions; and partly through more subtle means – of which the roadside phone call is just one example.

On 4 July Israeli prime minister Benjamin Netanyahu visited Uganda for just eight hours, the first stop on a four country tour of East Africa. It was a visit scheduled to coincide with the 40th anniversary of the Entebbe raid in which several Israeli soldiers were injured, and one killed, in a hostage rescue mission. However the following day’s headlines were not dominated by this, or the business summit that had been convened for the visit, but by Museveni.

In a speech described as “rambling”, the president made several diplomatic faux pas – most notably by frequently confusing Israel and Palestine. Unlike Mugabe’s reading of the wrong speech in Zimbabwe’s parliament, this could have been a deliberate ploy to divert attention. In Kenya, President Kenyatta and Netanyahu agreed to work more closely to tackle terrorism and they signed bilateral agreements for health, irrigation and immigration. Museveni had no such announcements to make. But his apparent ineptitude was the focus of news stories and discussion, not the dearth of agreements usually associated with state visits by foreign dignitaries.

Diversion is not a new tactic of the Museveni government in Uganda. A prominent recent example was the use of the Anti-Homosexuality Bill. Over a protracted period, beginning in 2009, it frequently reappeared in parliament or in the public domain when an issue the government did not want scrutinised was attracting increasing attention. One example would be its resurrection in 2013 at the same time as two divisive bills about oil legislation were being debated in parliament. This tactic cannot be relied upon to work every time, but recourse to violence or intimidation is always a viable alternative.

The sight of Besigye waving at crowds from the sunroof of his car as he makes his way through Kampala is a familiar scene in Ugandan politics, one often followed by his arrest and detention. The way Museveni manipulates the media through performance is less well understood. Having been thwarted by Ugandans using virtual private networks when he attempted to shut down social media during the election and presidential inauguration, is Museveni now experimenting with using it more dexterously for his own ends?