As outlined in “How will Tanzanians vote on Sunday 25 October? The Battle for Bunge” the opposition hopes to secure a record number of MPs in parliament. While opinion polls suggest the presidency remains out of reach, the four opposition parties united under the banner Umoja wa Katiba ya Wananchi (Coalition of Defenders of the People’s Constitution), or Ukawa, are expected to make inroads in constituencies across the country. Michaela Collord considers how Ukawa’s largest party, Chama cha Demokrasia na Maendeleo (Chadema), might break into the Central Zone, a traditional heartland for the ruling Chama Cha Mapinduzi (CCM).

When Tanzanians voted in 2010, a notable exception to CCM hegemony in the centre of the country was the constituency of Singida East, where voters elected Chadema candidate Tundu Lissu as their MP. Five years on, Chadema is set to retain Singida East, sweep the district council and make gains in other areas of Singida Region. The details of this unlikely political turnaround are instructive, revealing how opposition parties can improve their showing in rural areas but also the potential limitations of such an approach.

“In 1995 I was the only opposition candidate elected to office in the whole constituency,” recalls Joe Lema. “I was a village chairperson”. Today Lema manages the Chadema parliamentary campaign team in Singida East. He traces the genesis of this political transformation back to Lissu’s arrival on the scene in 2008.

Lema says that the few people who had left CCM to join the opposition before then “had no resources to work. There were no cars, no bodabodas (motorcycles). You couldn’t go around on foot!” When Lissu arrived, he came with two cars, the financial wherewithal to run a campaign and a clear message.

A lawyer and human rights activist, Lissu concentrated on informing citizens of their rights. Specifically, he denounced what he and many others in Singida view as a major abuse of government authority: michango. These forced contributions are collected on an ad hoc basis across Tanzania, ostensibly to supplement spending on local development projects, drilling boreholes or building new schools for example.

Lissu and others regard this form of coercive taxation as tantamount to “state lawlessness.” In Singida, Village Executive Officers (VEOs), appointed at the district level, would demand payment or threaten to seize livestock. VEOs operated with the full backing of CCM-dominated village and district councils, but provided little to no accountability over how michango were spent. Resistance led to harassment and arrest by party vigilantes.

“I abolished michango on the pulpit,” Lissu says of his campaigning in the run-up to the 2010 elections. “Everywhere I told people, ‘Don’t take nonsense from anybody. Don’t pay up. They ask you, you tell them our mbunge (MP) has said we shouldn’t. If they want they can deal with me.’” Even before his election, the lawyer-turned-politician intervened to secure citizens’ release from jail, which won him their confidence and support. Bernard, now a Chadema Youth chairman at ward level, recalls how in 2008 Lissu demanded that he and several others be released from police custody.

Other Singida East residents cite improvements in local development since michango were effectively abolished. Speaking before a campaign rally in early September 2015, a group of Chadema supporters stressed that vijana (the youth) had been abandoning Singida East for rapidly growing urban centres like Mwanza and Arusha in order to avoid what they felt were the economically debilitating effects of michango. Now these same young people “are settling here, building here, farming…Our youth are now doing wonderful things.”

One young woman remarked how in 2010 she had no party affiliation, but felt exploited by CCM:

“They forced their way into our homes and took chickens, goats…Now we eat chicken with our families. We sell a cow and we use the money for our families…CCM people say Lissu has denied citizens development. But this is not true. Development and this country are now ours. Lissu has brought ukombozi (liberation).”

This “liberation” has led to substantial changes in the way the state is organised locally. The raison d’être for the whole class of VEOs and their “militias” disappeared with the end of michango. Two-thirds of appointed VEOs have reportedly now abandoned their positions, while many militias have disbanded. 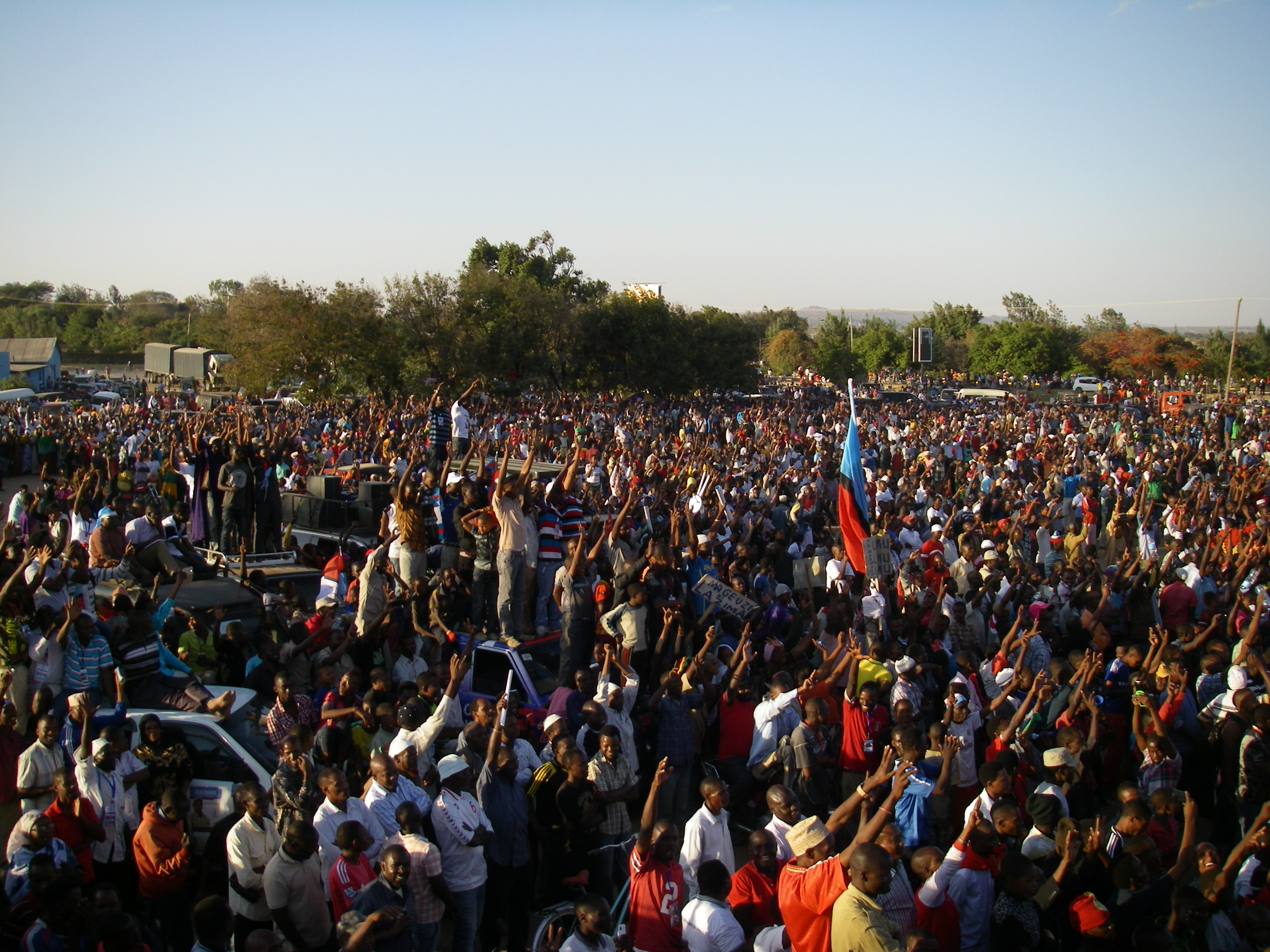 Lissu’s 2010 parliamentary campaign was not limited to the constituency of Singida East; he also toured the region to recruit members to Chadema. Lema recalls how, in 2008, “there was no party, but everywhere we went, we distributed party cards.”

In the 2009 local elections only five out of 44 villages in the constituency elected Chadema village chairpersons. Ahead of the 2010 general elections, the National Electoral Commission split the Singida South constituency into Singida East, Lissu’s hometown, and Singida West, home to the then incumbent CCM MP. According to Lema, CCM used financial inducements to convince the Chadema parliamentary candidate in Singida West to abandon his efforts.

In Singida East, the CCM parliamentary candidate was a prominent businessman. He used his personal wealth to bankroll the ruling party’s council candidates and his own parliamentary bid, allegedly resorting to rushwa (bribes) to win support. CCM dominated the municipal elections, with Chadema only gaining three councillors, but in the parliamentary poll the CCM candidate narrowly lost to Lissu, who secured 50.89% of votes cast.

After the election, Lissu and his supporters continued their efforts to build Chadema as a party and toured all eight constituencies within Singida Region.  Their aim remained “to tell citizens about their rights, about getting rid of michango” (Lema).

Asked whether his tactics have worked, Lissu replies, “Yes, I think they have, big time.” In the 2014 local elections, Chadema “literally destroyed CCM.” The opposition more than doubled their representation nationwide, but the result in Singida East stood out: Chadema won chairpersons in 41 villages, leaving CCM with only three.

Chadema has invested in a voter registration drive ahead of the 2015 elections, something that the opposition has neglected to do in the past. Lissu believes that Chadema now stands “a very good chance of actually winning 5 out of 8 constituencies in Singida region.”

The defection of Edward Lowassa, a prominent CCM politician, to Chadema and his subsequent nomination as Ukawa presidential candidate also forced the party to “reshuffle [its] cards” (Lissu). In Singida Urban, for example, Chadema dropped its selected parliamentary flag-bearer, a woman, in order to bring on board the former CCM Singida regional chairman, Mgana Msindai.

Despite Chadema’s gains, CCM is by no means a spent force in Singida Region. The ruling party boasts its own rising star in Mwigulu Nchemba, a former deputy secretary general of CCM who currently serves as MP for Iramba constituency and deputy finance minister. Nchemba’s rapid rise and youthful, charismatic style are emblematic of CCM’s efforts to renew its image. He has swapped the ruling party’s traditional green attire for a patriotic scarf and a peaked cap.

When touring his constituency in July, Nchemba presented himself as a local boy whose humble origins dictate that he will defend the interests of the poor. While formulating his personal brand – and implicitly acknowledging CCM’s weaknesses – Nchemba promised to use his position in the ruling party bring development to the people of Iramba. He likened the opposition presence to that of a few buzzing flies, irritating but ultimately non-threatening.

Are there lessons in Lissu’s experience for opposition parties seeking to gain a foothold in rural Tanzania? Referring to michango, Lissu argues that “if there is one rural issue that is a winning issue everywhere you go it is this one,” and adds “universally in rural Tanzania the single most important political question is the question of abuse of power by local officials.” The message, he is convinced, should be “Get rid of these tyrants!”, through an emphasis on questions of rights, taxation, and theft of public resources.

In Singida East, popular dissatisfaction with michango exposed a dissonance between CCM’s rhetoric of amani na utulivu (peace and tranquillity) and the reality of coercive taxation. In the eyes of its supporters, Chadema has assumed the ruling party’s mantle as provider of security through ending this form state predation.

Lissu is the first to acknowledge that many in Chadema remain sceptical about his strategy. Some do not share his critical views on michango, seeing the problem as a question of execution; others, lacking his experience as a lawyer, feel ill-equipped to defend their supporters when they are charged with infractions. But the party as a whole does endorse a commitment to counter the mafisadi (the corrupt) and campaign for more transparent, accountable governance. It also understands the vital importance of selecting proactive parliamentary candidates.

“No offense meant,” says the MP for Singida East, “but I think a lot of places could do with a Lissu here and there.”