Electoral shenanigans in Zanzibar: a sign of CCM desperation?

ARI seeks to encourage debate and question orthodox views. In this spirit, we post this guest blog by Dr Maïlys Chauvin, a French academic with LAM-CNRS, Sciences Po Bordeaux. Her account of election preparations in Zanzibar presents an urgent challenge to the “received wisdom” about good governance in Tanzania. The alleged manipulation of constituency boundaries, disenfranchisement of voters, and widespread intimidation, are all serious cause for concern regarding the credibility of polls on the Isles.

In preparation for general elections on 25 October, the United Republic of Tanzania has attempted biometric voter registration (BVR) for the first time. The poor handling of the process by the National Electoral Commission (NEC) on the mainland and the Zanzibar Electoral Commission (ZEC) on the Isles was reportedly the reason behind the postponement of the constitutional referendum promised for April. This is regrettable because the proposed constitution, or katiba, would have established a single truly independent electoral commission.

Municipal elections in December 2014 were marred by irregularities, but the results nevertheless documented a surge in support for the opposition. This was partially the result of a coalition between the official opposition on the mainland, Chama cha Demokrasia na Maendeleo (Chadema), and the Civic Union Front (CUF), which has repeatedly come within 1% of seizing power in Zanzibar. This opposition alliance under the banner of Umoja wa Katiba ya Wananchi (Ukawa), or Coalition of Defenders of the People’s Constitution, may provide the first credible threat to the ruling party, Chama cha Mapinduzi (CCM), since the party’s founding in 1977.

The prospect of political change has encouraged young Tanzanians to register to vote in large numbers. Refusing to be deterred by the technical challenges associated with BVR, citizens on the mainland have endured lengthy queues, and even camped overnight, to obtain voter ID cards. Those who have succeeded have posted photographs on Twitter. Yet preparations for the polls in Zanzibar provide cause for alarm rather than jubilation. The ZEC and the forces of law and order face multiple accusations of electoral malpractice and voter intimidation.[1]

Zanzibar: a challenge to the party-state

Although Zanzibaris account for less than 3% of Tanzania’s population, the Isles’ independence prior to the Union with Tanganyika in 1964 presents an enduring challenge to national unity. Debate over the proposed katiba illustrated a desire among Zanzibaris to revisit questions of sovereignty, and the lengths to which CCM would go to quash these calls. The jailing of members of a local Islamic movement known as Uamsho, or ‘awakening’, also led to a backlash on the Isles, contesting the authority of the party-state.[2]

Despite CUF joining a Government of National Unity in 2010, ostensibly to reduce tensions in Zanzibar’s elections, the party has benefited from renewed debate over the Isles’ status. CUF has extended support beyond its traditional powerbase on the northern island of Pemba, advancing in Zanzibar’s capital, which represents half of the archipelago’s population. Mji, one of the two urban districts on the southern island of Unguja, has always been a CUF stronghold; but the other, Magharibi, also endorsed the party during the 2010 elections. In Mji, CUF increased its support in 8 out of the 10 constituencies,[3] while in Magharibi/West district that was the case in 7 out of the 9 constituencies.[4] 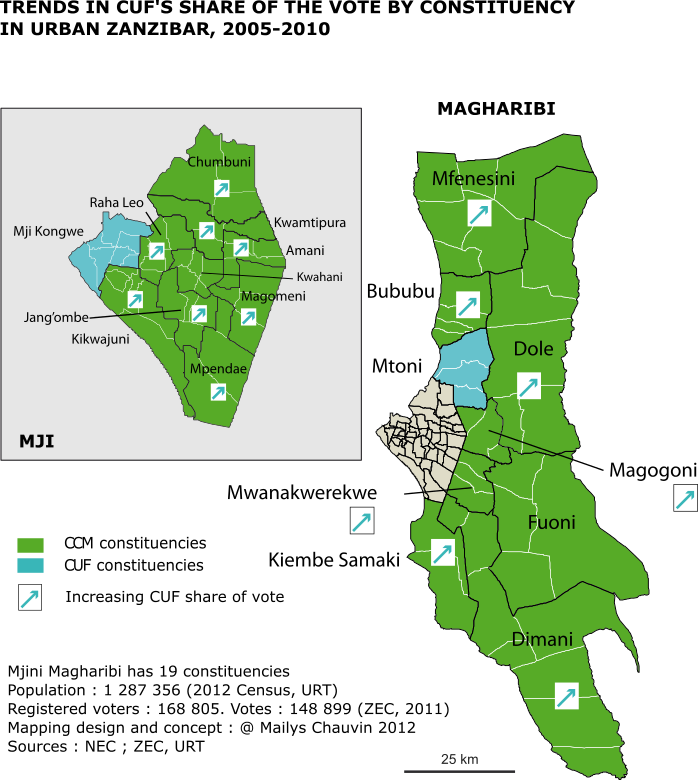 This threat to the status quo on the Isles has not gone unnoticed. Electoral boundaries and the voter registration process have been manipulated for political gain, while less subtle tactics of intimidation, harassment and repression have created a climate of fear. Such actions have only served to strengthen the will of CUF activists in the Isles.

Reframing constituencies, but for whose benefit?

Gerrymandering has been employed first to reconfigure shehias, or wards, and subsequently parliamentary constituencies. In May 2015, the government gazette announced plans to redistribute shehias sympathetic to CUF across several constituencies, thus diluting the influence of opposition voters. In Pemba, the number of wards was increased from 121 to 130; while in Unguja, the number increased from 210 to 257.[5] In July, the NEC recommended eliminating two constituencies in Pemba – reducing the number of seats in the Zanzibar House of Representatives and the Union parliament in Dodoma – and adding seven in Unguja. The ZEC decided instead to leave Pemba intact and establish four new constituencies in Unguja.[6]

Despite attempts to manipulate the electoral map, CUF retains significant levels of support in newly-established constituencies of Mto Pepo and Malindi. In highly competitive areas, voters are savvy enough to appreciate the benefits of publicly supporting CCM while privately admitting their intention to vote for CUF. The defection of Mansour Yussuf Himid, former Minister of Agriculture and Natural Resources, to CUF following the failure of the constitutional reform process, may be enough for the opposition to win the new constituency of Chukwani. The destabilising effect of high-profile defections such as that of former prime minister, Edward Lowassa, to Ukawa, together with the rejection of aspiring candidates in primaries, may fuel a further exodus to the opposition.

Pre-registration manipulation of ZanID and BVR

As gerrymandering alone cannot be counted on to deliver a predictable result, other tactics have been employed. From 1 June to 5 July, voter registration was conducted in 50 constituencies across the Isles, of which 19 are located in the capital. A Zanzibar Identity card (ZanID) is required in order to register. Youth have repeatedly complained that they are unable to apply for ZanID because shehas, or local administrators appointed by the Revolutionary Government of Zanzibar (RGZ), refuse to provide letters of residency to perceived CUF supporters. Of those who successfully managed to obtain the necessary documents to apply for a ZanID, thousands have still yet to receive the card and were thus unable to register to vote.[7]

Instead of their intended recipients, it is alleged that ZanID have been distributed to three groups: mainlanders, under-age voters, and ‘mercenaries’.

Legally, mainlanders cannot obtain a ZanID unless they have lived in Zanzibar for a decade. However, in July, Pereira Silima, the Deputy Minister of Home Affairs, privately acknowledged to a diplomat that it was possible non-Zanzibaris were registering to vote on the Isles.[8] The arrival, by night, of army boats at private jetties in Kizimkazi (Unguja) and Mkoani (Pemba) has been documented by local residents and CUF agents. Mainlanders have testified to having been transported to places where they were accommodated and fed before being escorted to receive the documents required for registration.[9]

Residents on Tumbatu Island witnessed the arrival of 400 adolescents holding ZanID intent on registering as under-age voters. Shehas stand accused of awarding ZanID to mamluki, or ‘mercenaries’ who hold multiple ZanIDs and have registered to vote in numerous constituencies. Such practices, whether true or merely alleged, risk jeopardising the legitimacy of the elections again this year – despite the shift to biometrics.

The deployment of armed forces

To deter Zanzibaris from scrutinising the registration process or protesting irregularities, the forces of law and order[10] have been deployed en masse in the capital, central and southern rural districts. When registration commenced in urban areas during the week commencing 22 June, residents of Magharibi A and B wards suffered repression by armed groups on a daily basis, as did CUF supporters in Magogoni, Mtoni and Bububu constituencies.[11]

Militia known as Ninja stationed themselves outside BVR stations to deter CUF agents from scrutinising the process.[12] Armed groups, called Janjaweed by locals, are said to be behind attacks on residents in their homes and at local businesses. Numerous journalists have been targeted. One was left unconscious near Maisara playground; others were threatened at their workplace, Coconut FM in Migombani.[13]

On Tuesday 23 June, CUF members walked out of Zanzibar’s House of Representatives, leaving Islanders pessimistic that the GNU would resolve the situation.[14] That Sunday, 28 June, three CUF supporters were shot at Makunduchi, Southern District. CUF Deputy Secretary General, Nassor Ahmed Mazrui, has written to the Commissioner of Police, Hamdan Omari Makame, and to the president of the ZEC, denouncing seven major incidents of violence and intimidation.[15] Fearful that their views are going unheard, CUF and 20 other parties refused to sign the Electoral Code of Ethics in July.[16]

The manipulation of electoral boundaries, perversion of the voter registration process, and creation of a climate of fear leaves little hope for a level playing field come the October polls. The United Nations Development Programme (UNDP), which has provided US$22.5 million to support Tanzania’s elections, has a responsibility to ensure that the principle of “one man, one vote” applies. If intimidation practices continue during the campaign in September and October, a free and fair vote cannot plausibly take place in the Isles. If nothing changes, it is likely that Zanzibaris will increasingly take to the streets. CUF agents have warned that their supporters are prepared for mass demonstrations.

[5] In the Magharibi/West district, which has over 400 000 inhabitants, three shehias were redistributed into Magharibi A and Magharibi B districts, while new wards are created; Mwera, Welezo and Mto Pepo in Magharibi A and two others in like Chukwani and Kijitoupele in Magharibi Bin Magharibu B district. Three constituencies remain intact; all of which elected CUF MPs who now serve as ministers in the GNU (Ali Mazrui for Mtoni, Juma Duni Haji for Bububu and Magogoni for Jihad Hassan). Bububu constituency has tripled in size by incorporating two shehias which were in Dole constituency, which supported CCM, and one from Mfenesini which was described as a “stolen” constituency in 2010 election results. Mtoni has been widely reconfigured and two new constituencies created under the names of Mto Pepo and Welezo. Mwera also emerged as a new constituency.

[6] See Ministry of Local Government announcement in the Gazeti on 8 May 2015.

[7] 2,230 residents registered as new voters in Micheweni District in Pemba Island, but a further 900 were unable to obtain the necessary documentation, according to estimates by CUF agents. This has disenfranchised approximatively one third of new voters. In districts across Pemba, the rate of exclusion varies from one third to one fifth of potential voters.

[9] Fumba, Kizimkazi (southern coast of Unguja), southern part of peri-urban Stone Town and Mkoani Town outskirts (Pemba) are among the places where these events were observed.

[12] They were seen near Hailie Selassie Darajani schools and Jamhuri garden and Darajani market in Stone Town on 25 June.