The Code of Conduct Act and Liberia’s 2017 election

In March 2014, Liberia’s legislature passed a National Code of Conduct (CoC) for all public officials and employees of the Government of Liberia; 28 years had elapsed since the legislation was first mandated by Article 90 of the 1986 Constitution. The originators of the 1986 basic law included this provision to protect the integrity of public service and guard against conflicts of interest among officials holding public office. The CoC contains an exhaustive list of actions – including bribery, nepotism, lobbying and unethical behaviour – that could give rise to a conflict of interest or undermine the credibility of public policy. Ahead of the 2017 elections some of its provisions are proving particularly controversial.

Part V of the CoC, which focuses on political participation, states that “all officials appointed by the president” are not allowed “to engage in political activities”. This covers contesting for elective office, campaigning for a political party or candidate, and using resources and facilities of government to back partisan politics. It further provides that appointed officials who want to canvass or participate in an election must resign at least two years before elections (three years in the case of tenured officials). Controversy arises because most people who stand for elective office in Liberia are active public servants, local government appointees or officials in state-run public enterprises and autonomous agencies. 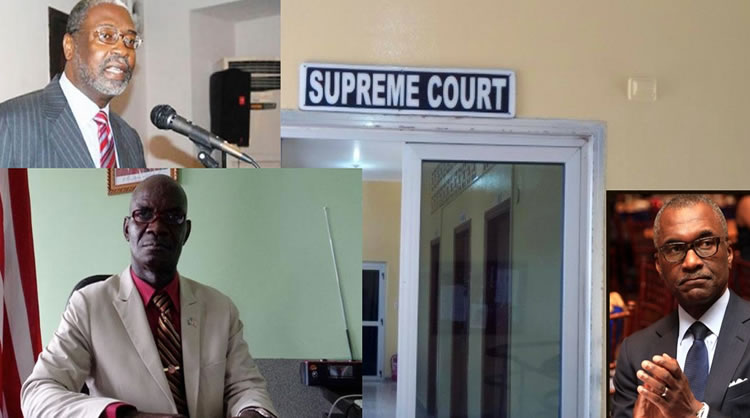 Like many other pieces of reform legislation in Liberia, the CoC was passed into law only to be shelved. However in October 2015, the Superintendent of Bong County, Selena Mappy-Polson, who aspired to stand in the 2017 elections, filed a petition before the circuit judge of the Ninth Judicial Circuit Court for Bong County for a declaratory judgment of the unconstitutionality of clauses in Part V. In its November 2015 ruling, the circuit court referred the matter to Liberia’s Supreme Court. In March 2017, the Supreme Court ruled – by a 3-2 majority vote – that the petition “both in law and in fact, is hereby denied” and saw “no compelling basis to declare the Code of Conduct Act unconstitutional”. The decision by two of the five justices to refuse to affix their signatures to the ruling and to publish their dissensions fuelled a tense and intractable political debate.

Critics of the judgment, including a former Chief Justice, were stunned by the decision to uphold legislation that could, if rigorously enforced, prevent experienced and competent public servants from standing – or even campaigning – in October’s elections. In the long run, suitable people could be deterred from taking up policymaking or executive roles in government. Political parties, almost all of which are fielding prospective candidates who are in open and flagrant violation of the CoC, have so far continued to insist the law is unconstitutional despite the March 2017 ruling. The secretary general of the ruling Unity Party, one of its vice chairmen and several leading party activists continue to hold key cabinet positions. Harrison Karnwea, recently named vice presidential candidate of the opposition Liberal Party, is a former director of the Liberian Forestry Development Authority. The leader of the Movement for Economic Empowerment, Mills Jones, has assured his supporters that nothing will stop him from contesting the election despite the fact that he too is potentially affected by the ruling

Behind the scenes chicanery?

The focus on Part V has overshadowed other relevant and salient provisions within the legislation that is, in many ways, a promising instrument for advancing Liberia’s long struggle against corruption and abuse of office. But a further question which has arisen in light of the Supreme Court’s verdict concerns whether or not the passage of the CoC legislation was itself politicised.

One suggestion is that Liberian lawmakers who passed the bill in 2014 saw it as a means of countering the growing influence and popularity of appointed local county officials and cabinet members who might jeopardise their chances of re-election in 2017. In the 2011 legislative elections more than half of the incumbents lost their seats.

A second, and perhaps more plausible explanation, is that the Part V provisions specifically targeted the then (now former) Central Bank Governor, Mills Jones, whose presumed (now confirmed) political ambitions threatened to thwart those of others in the legislature and executive. The timing gives further credence to this explanation. First tabled in 2008, the original draft of the CoC did not include the contentious restrictions contained in the version enacted in 2014, when rumours were rife of potential presidential bids not only by Mills Jones but from Alex Tyler and vice president Joseph Boakai. However, if its intention was to impede political opponents, Jones and Boakai have not been deterred. Both have declared they will run in October’s election, whilst Tyler has joined an opposition coalition led by George Weah.

The ongoing brouhaha over the CoC highlights the extent of polarisation between the political and juridical leaderships of Liberia. With the Supreme Court being the tribunal of final arbitration on all constitutional matters, it is still unclear whether potential candidates have received assurances that enable them to deliberately ignore the Supreme Court’s ruling and, if so, from whom; or why, if they do not discount the possibility of their registration being denied by the National Election Commission come July 2017, they are so confident of a satisfactory resolution to what would represent a serious political impasse. The nascent Office of the Ombudsman, created since the Supreme Court ruling, is responsible for developing regulations for the CoC in collaboration with the three branches of government and civil society, but it lacks the authority or capacity to deal with the crucial and complicated political issues that may arise.

For ordinary Liberians, having elections that are peaceful and credible is of greater importance than convoluted debates over the eligibility of candidates. However the manner in which the issues arising from Part V of the CoC are resolved will provide important insights into the state of democracy in Liberia.

Ibrahim Al-bakri Nyei is a Liberian researcher, activist and political commentator. He is the author of ARI’s expert briefing for Liberia’s election