In the first of a series of blogs about the impact and consequences of the Ebola epidemic in Sierra Leone, ARI researcher Jamie Hitchen, recently back from a year spent working in the country, focuses on health care. You can read the second blog, on economic consequences, here.

“Ebola has revealed that there was no system in the first place and what we really had were first aid centres not hospitals.” Reverend George Buannie to the author, 11 September 2014

The World Health Organization (WHO) estimates that 211 health workers have been among the estimated 3,000 victims of Ebola in West Africa.  In Sierra Leone alone, 4 doctors and as many as 60 nurses have died. In a country where there is one doctor per 45,000 people, compared to the UK rate of one doctor per 369 people, losing so many medical professionals cannot fail to have significant long-term effects.

How will it be possible to provide basic health care services with diminished human resources and a growing sense of distrust between citizens and government when they were already failing the population before the Ebola outbreak? 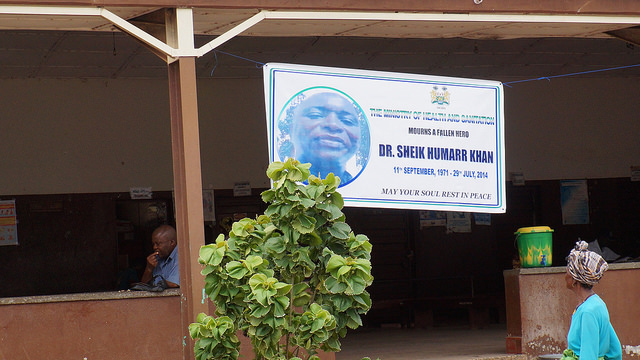 Dr Khan, Sierra Leone’s leading virologist, credited with saving the lives of over 100 ebola victims, died of the disease on 29 July 2014

George Buannie, executive director of the Fambul Initiative Network for Equality (FINE) which employs a ‘male-led’ approach to improving sexual health and access to health care, is unequivocal in declaring that “malaria kills people, cholera kills people, HIV/AIDs kills people, TB kills people, but all these diseases have been ignored since the outbreak of Ebola”.  This view was reiterated to me by Laura Woods, a volunteer midwife who until July worked in Bo, a major town in the south of the country. She too is certain that “deaths related to Ebola will include innocent mothers and babies who can’t access the basic health care they need”.

The Ebola death toll is seldom compared to that of diseases such as malaria, polio and even cholera which kill tens of thousands of Sierra Leoneans every year.  With all of Freetown’s private hospitals closed, and many public facilities forced to operate either at a reduced capacity or not at all due to staff refusing to work, a material increase in the number of people dying from preventable diseases and conditions threatens to be Ebola’s greatest tragedy.

Beyond the immediate response

Médicins Sans Frontières (MSF) has described the response so far as lethally inadequate and urged greater government and international support to bring the epidemic under control. A United Nations development worker based in Sierra Leone, who wishes to remain anonymous, fears that “in 6 to 10 months, we may be able to contain the epidemic; but all the good work done in health in Sierra Leone in the recent years will have been jeopardised”.

The Government of Sierra Leone must prioritise and plan – in partnership with donors and the country’s existing health professionals – how it can produce more trained staff, how they can be retained to stem the current ‘brain drain’, and how they can be provided with the basic equipment to do their jobs effectively.  It must also build consensus and far greater co-operation between government, health workers and citizens to ensure greater public understanding and trust in future.

President Koroma and his government cannot wait until the Ebola outbreak is controlled and the international media coverage dwindles.  Deaths from preventable diseases may not draw the same media attention as those caused by viruses with no freely available cure, but planning for radical improvements to the health care system must begin now to mitigate the potentially pernicious impact of the epidemic on the number of deaths from preventable diseases. With an average life expectancy of just 46 years, the people of Sierra Leone deserve as much; and sustainable economic growth will depend on it.