From the street to the ballot box: Elections in Burkina Faso

On Sunday 29 November, Burkina Faso will elect a new president and parliament. Despite a week of political turmoil in September, the West African nation is on the verge of completing a return to constitutional order following a popular revolution in October 2014.

For the first time in 25 years, the name Blaise Compaoré will not appear on ballot papers in Burkina Faso. “Beau Blaise” was forced to resign as president in October 2014 following mass protests against a constitutional amendment which would have entitled him to run for a fifth term. His successor will need to either obtain over 50% of the vote on Sunday, or to win in a run-off in January 2016. 127 new legislators will also be elected using a closed list proportional representation system where individuals win seats in the National Assembly based on their position in provincial and national party lists.

A controversial electoral law means Compaoré’s party, Congrès pour la Démocratie et le Progrès (CDP), and his allies who publicly supported the constitutional change, have been barred from nominating a presidential candidate. Although CDP has been able to field parliamentary candidates across the country, the absence of an incumbent head of state seeking re-election (or an anointed successor) has provided for a more equitable campaign environment. “Things have changed”, says a Burkinabè documentary-maker “before, people were afraid to be seen at some [opposition] meetings. Now, this is no longer the case”. 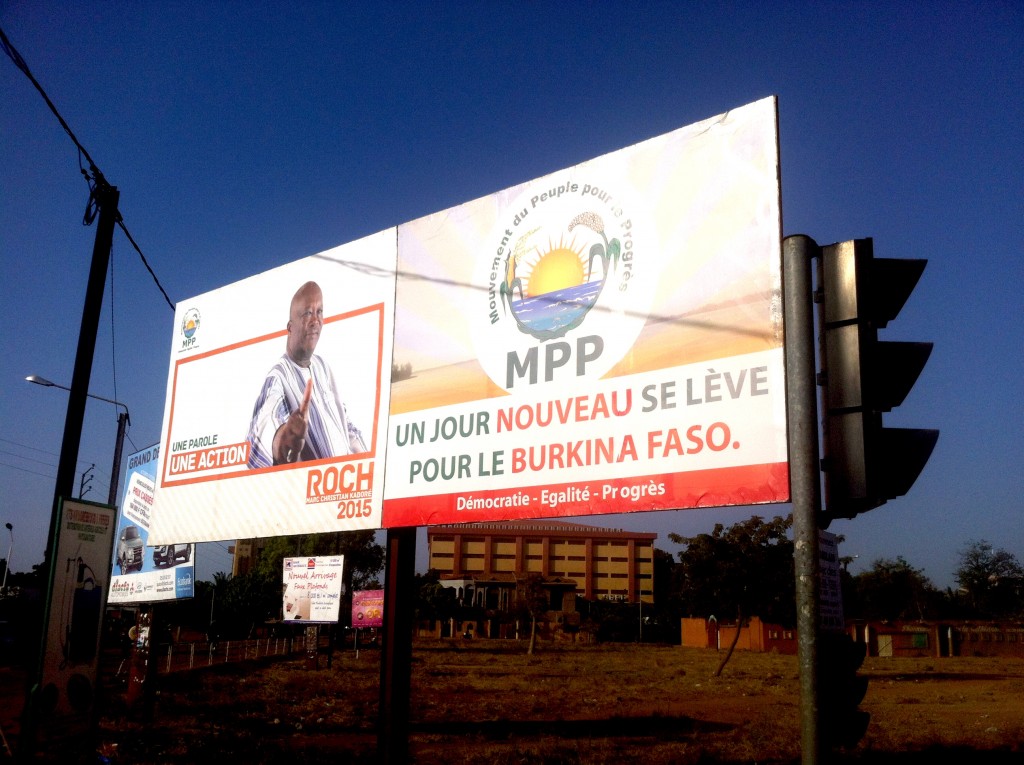 Campaigning for a new vision

The campaign officially started on 8 November. Measures adopted by the transitional government have allowed for a lively and fair process. Each of the 14 presidential candidates was provided with a grant of 25 million CFA francs (US$40,000) to organise meetings, print manifestos, posters and leaflets, travel to campaign events and train their political team. However, the absence of restrictions on campaign expenditure favours candidates and parties with their own resources. A further 460 million CFA francs has been allocated towards the legislative elections, to be used for the same purpose and divided among parties based on their number of candidates. Authorities have banned the distribution of t-shirts, hats, pens and other items at rallies, but rumours persist that small-scale vote buying continues, albeit less overtly than before.

Impressive professionalism has characterised the media coverage of the campaign with outlets such as Lefaso.net and Omega FM radio offering impartial coverage of meetings, comparisons of manifestos, and organising debates. “The media does its job well; much better than for the last elections”, confirms a young man from Ouagadougou, Burkina Faso’s capital, who follows the campaign via radio. An opinion shared by Burkina Faso’s Higher Communication Council, a regulatory public body, which praised the media’s commitment to inform the population about the campaign. Its head, Nathalie Somé, commended initiatives to produce radio and television programmes in the vernacular to reach a large and more diverse audience. Monitoring of the campaign has also revealed that most media outlets have provided candidates with equal access, ensuring fairer coverage. This relatively level playing field stands in stark contrast to the Compaoré era.

1,178,591 new voters have registered for these elections, an increase of 27% compared to 2012. This suggests heightened interest, but the true test of voters’ enthusiasm will be turnout on polling day. The complete revision of the electoral list between March and May 2015 has undoubtedly increased popular trust in the process. The election management body, Commission électorale nationale indépendante (CENI), is generally well regarded and has taken pains to explain the biometric voter register and satellite system which will be used on polling day. However, many personnel remain in post from the Compaoré era and delays could raise concerns.

The expectations facing whoever forms the new government are also very high. From improving access to health and education to tackling corruption, the list of issues to be addressed is long. Based on the 2006 census data, approximately 53% of the voting age population is estimated to be under 35 years old. This demographic have been the focus of a number of manifesto promises that aim to create jobs and economic opportunities.

A presidential run-off seems increasingly likely, an exceptional occurrence in a country where Compaoré was accustomed to winning with over 80% of the vote. The two front-runners also head the two main parties in the legislative vote. Roch Marc Christian Kaboré established the Mouvement du peuple pour le progrès (MPP) when he quit the CDP in 2013, while Zephirin Diabré, a liberal businessman, has led the Union pour le progrès et le changement (UPC) since 2010.

Supporters of the MPP are primarily rural voters, whereas the UPC has been able to attract a more educated urban base. A recent opinion poll gives MPP a slight edge in the legislative vote – 29.4% versus 20.5% for UPC – but with around half of voters supporting other parties, the assembly is likely to be more “diverse” than it was under Compaoré. This would mark an end to the dominant party system and create space for greater parliamentary debate. If no single party wins a majority of seats in the National Assembly, coalitions will be needed to pass legislation – thereby providing the opposition with the opportunity to act as a real counterweight. Whether the voice of the streets will continue to be heard or politics will revert to type remains to be seen.

Eloïse Bertrand is a PhD candidate in Politics and International Studies at the University of Warwick working on opposition politics in Burkina Faso and Uganda. She is covering the elections from Ouagadougou. She tweets at @Eloise_Btd