The latest in a succession of scandals in the UK House of Lords is a reminder that oversight and restraint are crucial ingredients of strong democratic institutions. 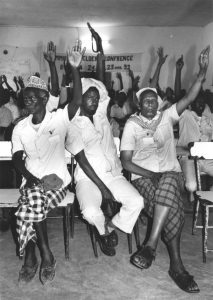 Wilful neglect of effective checks and balances on the executive and legislature has been widespread in the post-independence era in sub-Saharan Africa. The imperial ambitions of presidents need to be curbed by law. In Cameroon, President Paul Biya pushed through reforms to abolish presidential term limits in 2008, enabling him to lead the country for his sixth consecutive term. Senegalese incumbent Abdoulaye Wade ran for a third stint in office in the 2012 elections, despite having introduced a two term cap on presidential tenure. Bicameral parliaments are seen as one way to provide a check on the executive, averting undue concentration of power in the hands of the president and cabinet.

An unrestrained executive
In Malawi, during the presidency of Hastings Banda, the country’s legal system was routinely manipulated and used for political ends. The promulgation of a new multi-party constitution in 1994 was an important step in the creation of a new political and socio-economic order. Amongst numerous reforms, it provided for a directly elected National Assembly and an upper house in the form of an appointed Senate. The Senate was envisaged as a forum in which the traditional authorities, all of Malawi’s districts, women and the youth would be represented. The upper house was also to perform an important oversight function, providing a check on potential abuses of power by an unrestrained National Assembly.

The Malawian Constitution was initially introduced for a period of one year. By the time of its permanent adoption in 1995, the constitutional provision for the Senate had been removed. Abandoning the Senate was defended on the grounds of high running costs – the same reason would also be given in the case of Burkina Faso in 2002. Civil society groups criticised the decision, questioning the authority of the National Assembly to amend the constitution without public consultation. They voiced concerns about returning to a system with an overly powerful executive. In 2001, the provision for the Malawi Senate was repealed permanently.

In September 2012, MPs voted to abolish the Senegalese upper house of parliament. The change was proposed by newly-elected President Macky Sall who ran on a platform of reducing excessive government spending. Thirteen people died in floods that hit Dakar in August 2012. Sall said he was eager to spend the money saved by removing the 100-seat Senate (some CFA8bn or US$15m annually) on infrastructure improvements. But at what cost to the country’s political institutions?

Some commentators claimed that since half of the Senate’s members were appointed by the president, it functioned less as a check on the actions of the executive and more as a reward mechanism for political favours. However, Sall’s critics claimed that the move was aimed at weakening the opposition since most of the senators were supporters of ex-president Wade. Either way, if changes were needed might it not have been beneficial to retain the Senate but reform the way it was constituted and the function it served? Or indeed how much it cost? This is the question currently facing Somaliland’s parliament.

A bicameral parliament in Somaliland
Somaliland announced secession from Somalia in 1991. The Somali National Movement (SNM) – an armed insurgency group which had helped to overthrow the Siyad Barre regime and assumed leadership of the country – promised that power would be transferred to a civilian government within two years. The SNM fulfilled its promise and at the 1993 Borama Conference of Elders, Mohamed Egal was chosen as the country’s first president. Also at Borama, it was decided that the parliament in Somaliland would be made up of two chambers: the House of Elders and the House of Representatives.

The House of Elders – or Guurti – is an institutionalised version of a traditional council. In recognition of the central role played by clan leaders in the demobilisation and disarmament process, the Guurti became part of the country’s formal political system. The problem comes now, twenty years later, as Somaliland is striving to enhance its multi-party democratic system and seeks international recognition. Many of the original members have died since it was first established. The Guurti has essentially become hereditary. Most have no formal education.

There is a widespread feeling that the Guurti is being called upon to perform tasks which are beyond its original remit and current abilities. “We need to reassess the mandate and membership of the Guurti”, says SNM veteran Abdirahman Duale “Boobe” in After Borama: Consensus, representation and parliament in Somaliland. “When it was first set up in 1990, its role was primarily one of mediation. What we have now is an old group of inexperienced people with a central role in legislation.”

Taking sides
What shape should this reform take? Part of this ongoing debate relates to the issue of selection. If the members of the upper house were elected, there would be two elected chambers. Once again, only those who wield sufficient political clout – and with the means of financing a political campaign – would be able to secure a voice in the formal political system, rendering an upper house redundant.

An alternative is for the nomination of individuals to an upper house containing representatives from minority communities, civil society and experts in appropriate fields. As was envisaged – albeit briefly – in Malawi in 1994.

Perhaps the biggest opposition to reform comes from the current members of the Guurti. Changing the composition of the upper house will not prove popular with the incumbents. A position in traditional leadership structures has become an important way to gain influence – and, for some, to do business – in Somaliland. Even those who were not part of the original peace-making process of the early 1990s are likely to be reluctant to relinquish their positions without adequate incentives.

The answer to this conundrum is not immediately clear. Replicating systems developed over centuries in other parts of the world is of limited value. Institutional solutions to political problems need not be permanent. But they do need to remain relevant and appropriate.

The Guurti has not adapted well to the challenges of the legislative task of an upper house. Making decisions on intellectual property law, or assessing the terms of investment agreements on oil and gas, require different knowledge from that employed in the resolution of conflict. If an institution is required to perform both functions, its members must have appropriate skills for both tasks.

Going forward
One option would be for the Guurti to relinquish its parliamentary role. Instead, a new institution – possibly even extra-parliamentary – could be created with a remit to improve oversight, proactively engage with law-making, and be more broadly representative.

The Guurti’s traditional – and invaluable – role in mediation and conciliation, may well be needed again in the future of Somaliland and the wider Somali region. For this to be effective however, the Guurti needs to regain the moral authority and trust of the public that has diminished during its institutionalised incarnation.

Somaliland should be able to navigate such a transition – however fractious the process may prove. And if it does, it may find itself again setting the pace in developing fitting and adaptable political institutions. In time, others might choose to follow the example.