If annual meetings are a sign of progress, the African Development Bank has come a long way, judging by its recent gathering in Abidjan. It was the first I had attended for 20 years. In the 1990s, a few hundred people would turn up at the start of the week. If they weren’t from the Bank, they were lending or borrowing from it, watched by a small band from the press, of whom I was one.

It wasn’t just the refurbished Hotel Ivoire that added to the glitz this year, even if it no longer has an ice rink; nor the shining new toll bridge nearby that speeds the bankers across the lagoon to the airport, part-funded by the AfDB. The sheer scale of this year’s meeting – 4,500 people attended – the range and calibre of public speakers and the slick organisation bore no resemblance to those modest gatherings the Bank used to hold.

More important, the Bank works better. Gone, at least on the surface, was the parochialism and infighting over posts and funds between member countries and their proxies in the management that nearly destroyed the AfDB at the Abuja annual meeting in 1996. Then, a split vote resulted in acrimonious deadlock and the western donors threatened to pull the plug on a scandal-ridden institution that had lost its way.

Twenty years on, eight candidates stood for president. A long day and night of horse-trading seemed likely. Instead, it was over in a few hours, as the old barriers between Francophones and Anglophones, African and donor countries shifted to allow Akinwumi Adesina a quick victory. The unwritten rule that the president must not be from Nigeria, the biggest shareholder and guaranteed one of the vice-president posts, was quietly forgotten. Adesina isn’t even a former finance minister, but the majority of the AfDB’s governors thought he was the best candidate. 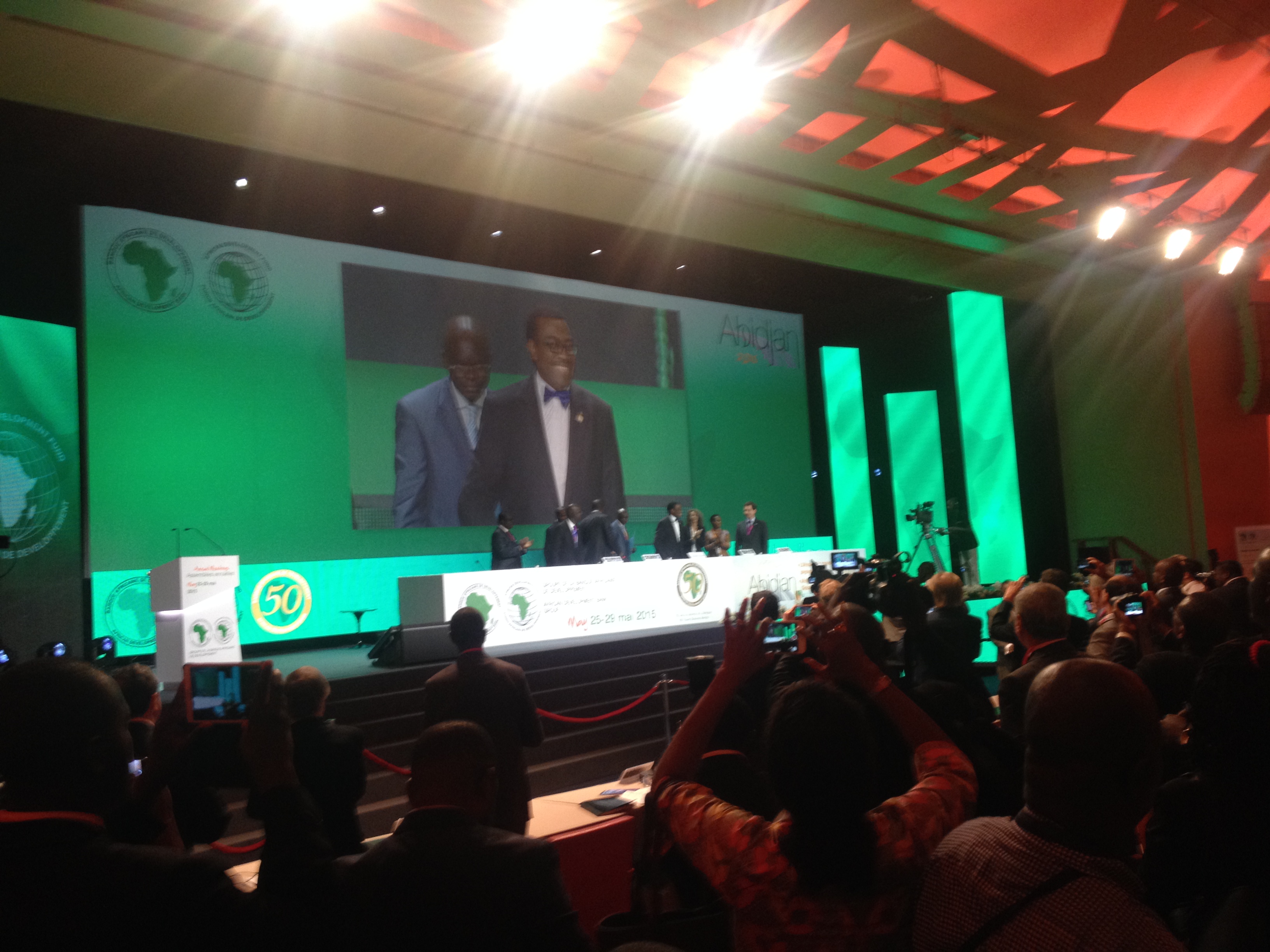 He won’t have much time to settle in when he takes over in September. Raising fresh funds from the donors’ decreasing supply of official aid, pulling together Africa’s sustainable development goals (SDGs) for the next 15 years and championing the continent’s cause at the climate change talks in Paris should keep him busy till the end of the year. When that is over, he must define his own strategy, as his acclaimed predecessor, Donald Kaberuka, did 10 years ago, politely scrapping the donors’ wish to shadow their own bilateral programmes and setting out his priorities in infrastructure and regional integration. Adesina may well streamline the mass of initiatives begun under the hyper-active Kaberuka and, perhaps, re-shuffle his senior management.

The AfDB faces the same question as all the development finance institutions, from the World Bank down: what is their role if they can only fund a fraction of the public and private investment the developing world needs? The stars of the development world speaking in Abidjan had a consistent answer: Africa must fund its own development primarily from its own resources, which must be unlocked by African governments. They happen to own most of the AfDB. This seems to be the new mantra. Thankfully, people talk less often about ‘ownership’ of programmes. A panel consisting of Kaberuka, Trevor Manuel (South Africa’s former finance minister), Carlos Lopes (executive secretary of the Economic Commission for Africa) and Daniel Zelikow (JP Morgan’s public sector group head) spelled out the estimates: the developing world will need to invest US $3 – 4 trillion annually to achieve the SDGs for basic infrastructure, food security, adapting to climate change, health and education.

The private sector view, as expressed by Zelikow, is that “the development finance community needs to look at themselves as agents of development”. In order to mitigate risk for investors, he added, “maybe it makes sense for multilaterals to behave more like insurers rather than lenders”.

This is more or less where the AfDB has been heading during Kaberuka’s 10 years at the helm. But, during his swan song as president at this annual meeting, Kaberuka said the funding model doesn’t fit the new business model. And what should be the new funding model? That is for the new president to decide, while Kaberuka writes his memoirs in the relative quiet of an Ivy League university in the United States. The book may provide a few more clues.

As investment is scaled up in Africa, the profile of the Bank is rising as the only pan-African institution capable of providing some solutions. Success brings its own problems. For the ordinary visitor like me the first one was how to find anyone from the Bank. Presumably, they were looking after the VIPs. And who were all these thousands of other people? They’re here to do business, explained a friend at the Bank, when I tracked him down at the back of the great hall. “The Bank has become the place you have to talk to if you want to do on this continent, so businesses also come here to meet each other”.

For the AfDB, success simply brings too many demands for their finite resources to manage. I asked another senior official: how can they be expected to be an infrastructure and regional integration bank and at the same time provide the lead on problems as diverse as rebuilding institutions in fragile states, control of epidemics, climate change response and equality for women?

“We can’t,” he said. “We don’t have the people or the knowledge. Too much is expected of the Bank. And, yes, we all feel there are just too many initiatives.”

As the meeting wound up, there were congratulations all round and the bandwagon rolled on to Cape Town for the World Economic Forum on Africa, the Financing for Development conference in Addis Ababa, the SDG gathering and the World Bank-IMF annual meeting… Next year the multitude will descend on Lusaka for the AfDB’s 51st meeting. By then, we should know which way Adesina is heading.

Paul Adams is the author of “Bank to the Future: New Era at the AfDB”.