Greater economic and financial commitment – and a fundamental restructuring of the rural economy – are needed if South African land reform is to progress. Does a raft of new legislation signal renewed vigour on the part of the ANC? 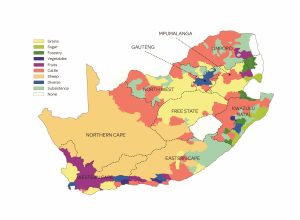 On 19th June, South Africa will mark the centenary of the 1913 Natives’ Land Act, which effectively excluded the black population from the ownership of some 90% of land. The emotive issue of the land reform programme, initiated in 1994 by the African National Congress (ANC) to redress historical injustices, is once more to the fore.

During a recent budget debate in the South African Parliament, an outgoing Freedom Front Plus MP, Pieter Groenewald, warned the government that “whipping up emotions” about land reform threatens to create a “Zimbabwe situation.” Gugile Nkwinti, Minister in the Department of Rural Development and Land Reform (RDLR), responded disarmingly by calling the comparison with Robert Mugabe an “honour”.

New legislation – The Expropriation Bill, Restitution Amendment Bill  and Valuation Bill – has raised the temperature of the public debate about land reform. It is accompanied by gloomy news from other quarters. Last year witnessed levels of industrial unrest “not seen since the days of apartheid.” At the end of May 2013, the World Bank slashed South Africa’s growth forecast for the current year from 3.2% to 2.5%. This was followed by the shooting of two National Union of Mineworkers officials at Lonmin PLC’s Marikana platinum mine – the site where 44 people died last August. A recent Business Day editorial read: “South Africa approaches tipping point.”

Warnings of the land issue being a “time-bomb” or a “tinder box” have thus far proved alarmist, given the lack of significant, coordinated protest to the slow progress of reform over the last 19 years. But against the backdrop of subdued economic growth, widespread industrial unrest and rising inequality, meandering land and agrarian reform is susceptible to political opportunism. During his leadership of the ANC Youth League, Julius Malema made expropriation of white-owned land one of the League’s main rallying calls. “The land question must be resolved, if needs be the hard way,” Malema said, quoting Oliver Tambo – an emblematic figure in ANC history.

In 1996, two years after the end of apartheid, some 60,000 white commercial farmers owned almost 70% of land classified as agricultural and leased a further 19%. The ANC pledged to redistribute 30% of white-owned agricultural land to black farmers by 1999, and to restitute property lost as a result of racist legislation. By 2012, some 7.95m hectares had been transferred, about a third of the 24.6m originally targeted. An estimated US$3.2 billion was spent on the land reform programme between 1994 and 2013 – equivalent to a single year’s budget for housing development.

The slow progress of land redistribution and high cost of land restitution have been pinned on the adherence to a willing seller, willing buyer (WSWB) principle. In the absence of compulsion, most landowners have been reluctant to sell to the state. Collusion between sellers, land valuers and government officials – and instances of corruption – have inflated market prices and made purchases prohibitively expensive.

WSWB has been abandoned and replaced by expropriation with “just and equitable” compensation, as is sanctioned by the South African Constitution. The government hopes that a new Expropriation Bill, the introduction of land ceilings and the creation of a valuer general will speed up land transfers and prevent inflation of land prices. Sceptics predict more red tape, lengthy legal challenges from landowners – and the alienation of white commercial farmers.

Complex legal issues present further obstacles to land reform. Section 25 of the constitution both guarantees secure property rights and obliges the state to “enable citizens to gain access to land on an equitable basis.” The ANC government also has to maintain its appeal to core voters and international investors alike. An estimated 62% of the population is urban.

While land dispossession was a historical event, solutions must be found amid the economic and social realities of contemporary South Africa. Although the speed of redistribution matters, simple shunting of hectares is not sufficient. Land reform must go hand-in-hand with a restructuring of the rural economy. This may take a generation – or more.

Successive administrations in Pretoria have equated national food security with large-scale commercial farming – a sector dominated by white South Africans. The potential for millions of black smallholders to increase production, raise incomes and create much needed jobs has been overlooked. This was the bedrock of agricultural transformation which fuelled the rapid economic growth of most South-east Asian economies. In South Africa, the government has prioritised grafting redistributed land onto existing commercial units. Much of this land has been deemed “no longer productive” by RDLR.

Successful large farms will always have a key role in South Africa’s agricultural economy. But the current model is not compatible with a critical need to create more rural jobs. Between 2006 and 2012, the number of South Africans employed in agriculture fell from 1.09m to 661,000. Rural unemployment stands at 52%, twice the national average. Acute poverty is rife in rural areas.

Alarmingly frequent murders of white farmers usually feature prominently in coverage of the land issue in foreign newspapers. Yet, rather than being an expression of a determination to seize land, rural crime in South Africa is mostly prompted by astounding – and rising – inequality and a historically antagonistic relationship between white commercial farmers, black labourers and local communities. Some farmers’ associations have acknowledged that their responsibilities to surrounding communities have fundamentally altered and need urgent attention. Others have proved far more resistant to change.

It is far too soon to predict whether the reinvigorated debate about land reform, and the accompanying flurry of legislation, translates into tangible results. But the ANC’s undertaking to create a million agriculture-related jobs by 2030 might suggest that it is beginning to recognise a real opportunity in agriculture. It is clear that if this opportunity is to be realised, a bolder – and more wholesale – approach to restructuring South Africa’s rural economy is needed. To find out more, see Africa Research Institute’s most recent briefing note: Waiting for the green revolution: Land reform in South Africa.