The “silent crisis” of food price inflation in Africa

Since the global financial crisis of 2007-8 inflation has been subdued in most economies. Deflation has been considered a greater threat by governments around the world. Africa has been no exception to the narrative that inflation is “under control”. Attention has focused more on GDP growth rates. However, while outbreaks of hyperinflation have been relatively few in the last decade, and have affected specific countries for specific reasons rather than whole regions, living costs have risen relentlessly. Food inflation is a particular concern.

In a single week in the middle of February 2017, inflation figures were released for some of Africa’s largest economies. Headline inflation during January was 40.3% in Angola, 18.7% in Nigeria, 13.3% in Ghana and 6.8% in South Africa. In none of these countries could high inflation be attributed to the economy “overheating”: the latest GDP growth rates for Nigeria and South Africa are minus 1.5% and 0.2% respectively; and the figures for Angola and Ghana are 1.3% and 3%. In 2016, Nigeria and Ghana experienced their worst overall economic performance in two decades.

Measurement of inflation varies, as does the weighting given to food prices in headline national consumer price indices. Food accounts for 17% of the CPI in South Africa, 36% in Kenya and 50% in Nigeria. According to the IMF, the average weighting for sub-Saharan Africa is 40%, well above the 15% in “advanced” economies. In other words, food prices are the single most important component of African inflation indices – by far. Yet a recent study by the IMF observes that central banks and finance ministries usually strip out food and energy prices when defining “core” or “underlying” inflation and formulating monetary policy to contain it. Food and fuel are considered volatile commodities and are excluded so as not to distort the statistical trend. For most people, these are core expenses. 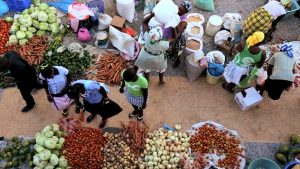 On global exchanges prices for most essential foodstuffs have fallen steadily in US dollar terms since 2011, and are well below the crisis levels of 2007-8. Wheat is trading not far above its 20 year low; maize is well below the spikes of 2008, 2011 and 2013; and rice is about a third as expensive as in 2008. These relatively benign prices are not being enjoyed by consumers in Africa. In February 2017, 9 out of 12 domestic food price warnings issued by the Food and Agriculture Organization of the United Nations (FAO) were for African countries.

Drought has had a marked effect on southern and eastern Africa. In 2016, South Africa’s food price inflation (16.5%) far exceeded headline inflation (6.5%). According to the PACSA Food Price Barometer annual report, in September 2016 the “big foods” cost 25% more than a year earlier, with a 25kg bag of maize costing a third more. “Low-income households are really struggling. It is becoming more difficult to put food on the table,” the report noted. Many were forced to cut food purchases to below the recommended nutrition level. By December, maize prices in Malawi had reached an all-time high; in Zambia food price inflation peaked at 26.6% earlier in the year; Mozambique is one of the dozen African countries for which the FAO has a current food price warning. Only in Zimbabwe was there food price deflation in 2016, for reasons specific to the country’s economic structure.

By January 2017, the full impact of the failure of the short rains in October/November was being felt in eastern Africa. According to The Standard, in most rural areas of Kenya a 2kg tin of maize was selling for KES100-130, compared to KES70-80 a month earlier. Headline inflation has risen to the top of the Central Bank of Kenya’s targeted range of 5% plus or minus 2.5% and, according to Kwame Owino, chief executive of the Institute of Economic Affairs (IEA-Kenya), looks set to exceed 10% within a few months. The government has declared the drought a national disaster. In Uganda, annual headline inflation rose to 6.7% in February 2017, but food costs were up by 18.8% year-on-year. Tanzania proved more successful than others in the region at containing food price increases throughout 2016, but 2017 started with rumours of imminent shortages and widespread concerns persist. 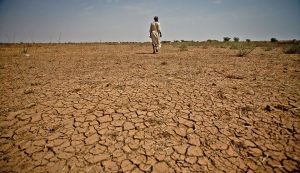 In Somalia, a major food security crisis is unfolding, with a “very real risk” of famine according to the UN.  Maize and sorghum prices are 70-90% higher than a year ago, depending on the market, although livestock prices have plummeted as pastoralists sell off stock, mostly in very poor condition, to raise cash. Famine has already been declared in war and drought-affected South Sudan, while in Sudan food and fuel price rises drove headline inflation up to 33% in January 2017. During the 2015-16 drought, the worst in 50 years, Ethiopia succeeded in averting famine. Food price rises, at less than 10%, were far lower than in previous occurrences.

Elsewhere on the continent, unsustainable debts or economic mismanagement – as opposed to drought – have wrought havoc with food prices. In Angola, annual food price inflation remains well over 40%. In Mozambique, in the grip of a major debt scandal, the figure surged from 19% in February 2016 to 40% in September. In Nigeria, the 2016 harvest was good and conflict is largely restricted to the northeast, the Delta and southern Kaduna. But massive currency depreciation made Nigerian foodstuffs cheaper for neighbouring countries to import, reducing availability in the domestic market. Combined with shortcomings in agricultural policy, this triggered rampant food price inflation nationwide.

In Kano, the wholesale price of millet rose by an average of 7% per month in 2016, more than doubling in the course of the year. In Lagos, in January, the wholesale cost of a 50kg bag of domestically-grown staple garri was ₦10,000, 66% more than a year earlier; in Abuja, a 50kg bag of rice was ₦18,500, up 61% year on year; and in Ekiti, a mudu of beans was selling ₦500, 43% up year-on-year.  About the only major food product to have become cheaper during 2016 was tomatoes. In a “Cost of Living in Nigeria” survey at the start of 2017, The Cable asserted that “there are strong indications that more Nigerians are living in poverty today than they were just 12 months ago.” In neighbouring countries, grain prices were generally lower in January 2017 than a year earlier.

While food price spikes caused by drought, war, economic factors, inefficient regional markets or agricultural policy are not uncommon, in time a measure of stabilisation usually occurs. The problem for African consumers is that almost everywhere the trend is persistently upwards. Kenya’s food price inflation has averaged about 12.5% a year for the past five years; Ghana’s averages 8% a year; even in Botswana, which has generally managed inflation better than most, the average is 5% a year. Only in the eight countries in the West Africa Economic and Monetary Union (WAEMU) countries, where the CFA franc is pegged to the Euro, is the five year average closer to 5% a year than the double digit inflation common elsewhere on the continent.  The effect of incessant annual increases of these magnitudes is pernicious, the more so when accompanied by rising fuel prices.

While food prices rise constantly, few are able to increase their earnings to match. Public servants sometimes succeed in applying political pressure for higher salaries, particularly in the run-up to elections. But for the majority in the informal economy or subsistence agriculture earnings fail to keep up with rises in living costs. In Kenya, according to IEA (Kenya), the number of waged employees is fewer than 2.5 million – about 12% of the total number of “eligible workers” between the ages of 18 and 60. In Nigeria, “wages cannot keep pace,” Bismarck Rewane, economic commentator and chief executive of Financial Derivatives Nigeria, told ARI. “Inflation and devaluation has cut the real incomes of Nigeria’s lower middle class by 60%.” Furthermore, many Nigerians are reliant on expenditure by the more affluent, but many employees of cash-strapped firms or state governments are not getting paid at all at the moment.

Since 2000, in an era of much improved macroeconomic management in Africa, food inflation has exceeded core inflation by more than 30%.[1] This is simply too large a differential for policymakers, central bankers and international financial institutions to continue “stripping out” or ignoring altogether. Its consequences are universally insidious, but especially “anti-poor”. Even if the 2008 food price riots in Africa – and elsewhere in the world – are (unwisely) dismissed as an aberration, in countries where the consequences of food price inflation are left unaddressed political stability must eventually be undermined or worsen.

There is no shortage of proposed solutions. The IMF report mentioned in this article suggests that “central banks and fiscal authorities…should take food prices into consideration when assessing the appropriate stance of monetary and fiscal policy”; and “improving the tradability of food—for example, by reducing tariffs and improving transport and storage infrastructure—along with other structural reforms would increase productivity in the agricultural sector and could decrease food price pressures and therefore improve welfare.”[2]Certainly, combinations of economic and agricultural policy measures pursued persistently have improved matters elsewhere. No miraculous discoveries are required. But the start point is recognition of the unsustainability of a relentless rise in the cost of food throughout Africa; and the fact that while droughts and conflict may create price spikes, the root causes of this phenomenon lie with government. Donald Kaberuka, former president of the African Development Bank is fond of recalling how a taxi driver in Senegal once told him: “I can’t eat GDP growth.”