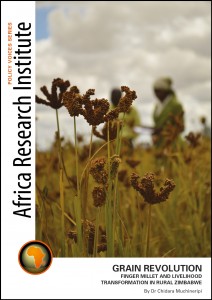 Food shortages are the root cause of poverty in Zimbabwe’s Gutu district. Rainfall is generally low and erratic. In most places the soil is sandy and over-cultivated. High population density means that the vast majority of the district’s 40,000 households are restricted to farming on small plots. By the mid-2000s the effect of an economic crisis on the government’s agricultural budget and an over-reliance on growing maize, a crop that requires high rainfall, had drastically undermined food security in Gutu. The perennial fear of food shortages in turn stymied agricultural and economic innovation, ensnaring the population in increasingly precarious subsistence farming.

Following a severe drought in 2005, the Chinyika Communities Development Project was conceived by Dr Chidara Muchineripi as a means to overcome the persistent threat of food shortages – and even famine – in Gutu, his home district. His objective was to persuade farmers dependent on maize production to plant finger millet, a neglected crop that is indigenous to Zimbabwe. Chidara’s rationale is simple: finger millet is drought-resistant and better suited to semi-arid and arid areas than maize. Although its cultivation is more labour-intensive, it requires fewer expensive inputs than maize. It is also highly nutritious and can be stored for up to 25 years.

By 2014 almost every household in Gutu had participated in the project. Farmers with a nucleus of finger millet production each have 3-5 years of strategic food reserves and the collective capacity to produce a surplus of up to 2,000 tons a year. Accumulated reserves of finger millet exceed 20,000 tons. Families in Gutu now have a stable, dependable supply of food. This has been achieved without any external intervention or funding. As Chidara makes clear in this timely and instructive Policy Voice publication, the success of the Chinyika Communities Development Project is grounded in participatory research, community engagement and local ownership. Traditional knowledge and culture have been very much in the vanguard in addressing Gutu’s predicament.

The narrative is about much more than switching from one crop to another. A stable supply of food – and behavioural change – has imbued farmers with the confidence to pursue various income-generating activities. Chidara is adamant that farming is a business. In Gutu, finger millet has been the key to the emergence of a diversified and innovative family farming system. Elsewhere the transformative crop – or animal – might be different.

In the long term, Chidara’s aim is to develop a vibrant cash market for small grains in Zimbabwe and the wider region. While optimistic about the potential, he is candid about the obstacles and delivers clear recommendations regarding the practical and policy measures that would further transform the livelihoods of farmers in Gutu and other rural districts of Zimbabwe.

Grain Revolution is a sequel to Chidara’s Policy Voice “Feeding five thousand: The case for indigenous crops, in Zimbabwe”, published in 2008.