“Africa is to Europe as the picture is to Dorian Gray – a carrier onto whom the master unloads his physical and moral deformities so that he may go forward, erect and immaculate”.

These words from Chinua Achebe’s masterful essay on racism in Joseph Conrad’s Heart of Darkness are at the root of many discussions about the African continent today. They have, however, always triggered somewhat mixed emotions in me. On the one hand, I utterly reject the fetishised portrayals of Africa “trapped in primordial barbarity” that Achebe lambasts. I have always tried to heed his call for the continent to be regarded “quite simply as a continent of people – not angels but not rudimentary souls either – just people”. But deep down, if I am completely honest, I know that it was images of “primordial barbarity” that first sparked my interest in Africa. 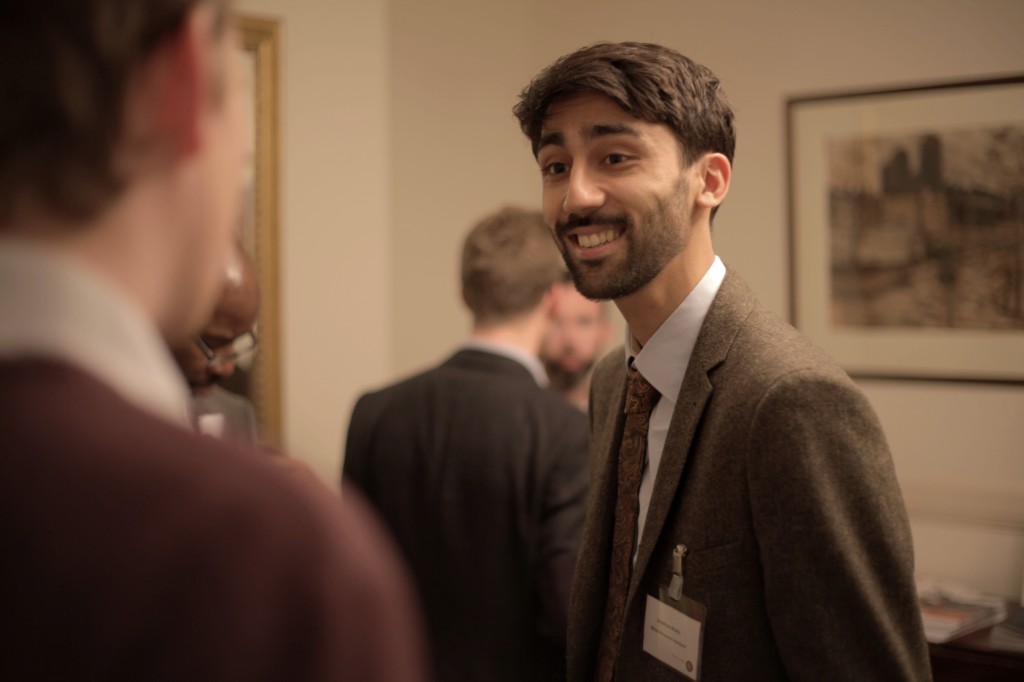 Jonathan Bhalla in action at one of our events

As a boy aged nine, I remember being deeply moved by television appeals during the 1992 Somali famine. The images of children younger than me – desperately thin but with distended stomachs – triggered hitherto unfelt emotions. I saved fully half of my pocket money for “those children in Somalia”. While alarmed by their vulnerability, I was also perversely fascinated by their plight. I wanted to know more.

Two years later, at secondary school, I recall trying to make a connection between those images and my classmate Farah, a Somali boy with a prosthetic leg. Why is he here? Did he too experience what was so graphically portrayed on TV? How did he lose his leg? I didn’t dare ask him. Nor could I – he hardly spoke English.

At university, I grabbed the opportunity to study African politics with both hands. It was exhilarating from the outset. In place of European politics and western political philosophy topics which, for me, were stale I embarked on an exploration of ethnicity, witchcraft, armed rebellions and famine.

It was not all doom and gloom, but with hindsight I detected traces of a propensity within academia to reinforce – however unintentionally – the very stereotypes that practitioners are seeking to debunk. Academic journals and books offer only snapshots of reality. Even the text that inspired me the most, “Africa Works” by Patrick Chabal and Jean-Pascal Daloz, which argues that Africa is not a Hobbesian dystopia but just different, still has a thick veneer of exoticism to its portrayal of the continent: in Africa, people think and act in alternative ways, the continent is simply different.

For the past six years I’ve had the privilege of working for an institution which is guided by an ambition to counter this tendency. At Africa Research Institute, our publications and events have sought to provide a platform for Africans to directly address policy issues that often do not get the attention from governments, donors or the private sector that they deserve. Most of the authors of our flagship Policy Voices publications are not researchers or academics, nor have they been educated at western universities. They are simply people who live and work on the continent in sectors and industries that are crucial to Africa’s future prosperity. They talk from experience and with a track record of success.

By working and engaging with these people I have been exposed to a wide range of perspectives that are largely absent from western media and academia alike. At ARI, we don’t fit the views of our authors and partners around theories or arguments of our own making. Our partners define and drive the discussion based on their first hand practical experience. The result is a body of work that is largely devoid of ideology or hidden agendas but of practical relevance.

I well remember an early field trip during which I met James Gikunji Muuru, a smallholder horticulture farmer from Mwea, Kenya. James explained how, in his opinion, free markets can work for the poor in Africa; and in his Policy Voice “Kenya’s Flying Vegetables” he delivered the first response from an African farmer to the notorious “food miles” debate taking place at the time in the UK. He also talked in great detail about how he and fellow members of his farming organisation go about meeting the strictest international standards for agriculture in order to gain access to European markets. He showed me how they co-ordinate their harvests, pool resources and respond to demand to claim their share of the burgeoning global trade in horticultural products.

James was well-acquainted with claims made in the UK media that we should avoid air-freighted fruits and vegetables because of the environmental impact. He had this to say in response: “European farmers cannot meet the demand. In Kenya, we can grow horticultural crops all year round. If carbon labels are applied to air-freighted horticulture, they should also be applied to all the products Kenya imports from Europe … Small farmers have been trained in good agricultural practices, adapting our farming methods to European standards over a number of years … We don’t use greenhouses or large mechanised devices. Our farming practices are environmentally friendly. Everything is grown under the sun”.

On a subsequent field trip I observed an example of “corporate social responsibility” – all too often more hype and rhetoric than genuine displays of responsibility – that really worked. In “Nursing the Future”, Angela Nguku documents a quite unique partnership between global consultancy firm Accenture, NGO AMREF Health Africa and the Kenyan Ministry of Health to roll out a nationwide e-learning programme to improve the skills of front-line nurses. In 2004, at the inception of this programme, the Kenyan government had the capacity to enrol just 100 nurses a year in classroom courses. By 2008, more than 600 nurses qualified via e-learning and a further 5,798 were in training. Where the private sector is able to leverage the skills it utilises in its everyday operations in true partnership with local institutions, the chances of success are far greater.

While new technology has much to offer African countries, and vice versa, I have been reminded time and again that traditional knowledge and ideas are vitally important. No one has made me understand this better than Chidara Muchineripi. A management consultant based in Harare but also the son of a chief from Zimbabwe’s Gutu district, Chidara has tirelessly and successfully worked to counter a recent history of chronic shortages of food in his home district. He has done this by encouraging rural households to plant more finger millet, a neglected traditional crop that is naturally drought-resistant. He has demonstrated that once farmers are food secure, their capacity to transform their livelihoods through agriculture – or other means – increases dramatically. The participatory research, consistent community engagement and promotion of local ownership that characterises the Chinyika Communities Development Project have fostered the participation of as many as 40,000 farmers.

These are but a few of the achievements and innovations that ARI has drawn attention to during the past six years. Many more are in the pipeline. Although I will no longer be a part of the team, I know that I leave behind a truly unique institution that will continue to grow and thrive. To have been a part of it fills me with a feeling of profound achievement.