Views of suburban Luanda: banishing the ghosts from Kilamba

In this second guest post Dr Chloé Buire focuses on Kilamba New City, a satellite town marketed at middle class Luandans. The New City reportedly cost US$3.5 billion to build, financed through an oil-for-infrastructure deal with China. Chloé interrogates the myth that Kilamba is a ‘ghost town’ and illustrates how the settlement has attracted young, upwardly mobile Angolans.

The experience of the Domingos family recounted in the last post was typical of the early 2000s; but by the end of the decade, the Angolan government had changed tack. During the 2008 election campaign, President José Eduardo dos Santos promised to build a million new homes by 2012. This announcement spurred the creation of Novas Centralidades, or “New Centralities”, on the periphery of Angola’s main cities. The Nova Cidade de Kilamba (“Kilamba New City”) located approximately 30kms south of Luanda became the pilot project for this new mode of urbanisation.

Nova Cidade de Kilamba was designed to be a self-contained development consisting of affordable housing for half-a-million Angolans. Plots were reserved for hospitals and schools, the ground floor of some residential blocs were allocated for commercial use, and green spaces and sports pitches built. The first phase, consisting of 3,800 apartments, was constructed by a Chinese company, CITIC, within 18 months. Responsible for their sale was Delta Imobiliária, a corporation linked to influential figures in the MPLA, state oil company Sonangol, and the military.

On paper, a ‘rent-to-buy’ scheme made Kilamba an attractive alternative to the overpopulated metropole where landlords often require a minimum of six months’ rent up front, in cash. Yet, with monthly rental originally set at US$600, Kilamba was out of reach for those seeking to leave the musseques and start a new life in the suburbs. Moreover, access to the scheme was initially restricted to civil servants, with the state providing a mortgage in the absence of sufficient commercial banking. 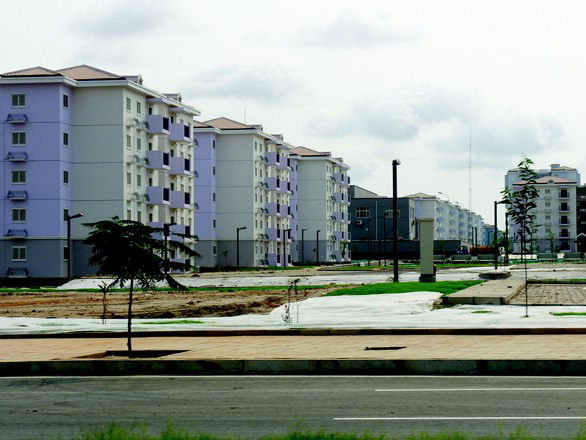 The New City’s inauguration in July 2011 attracted a great deal of international attention; however, a year later journalists reported that Kilamba was a ‘ghost town’. Numerous factors explained the number of uninhabited apartments, but most important was the awarding of flats to civil servants as a ‘bonus’. In February 2013, President dos Santos ordered that the apartments be made affordable and the state-backed mortgage scheme open to all Angolans.

When the smallest unit (T3) dropped in price from US$125,000 to US$70,000, Kilamba suddenly became Luanda’s most accessible property market. Hundreds of applicants queued for days outside the offices of SONIP, the real estate arm of Sonangol which had been charged with taking over from Delta Imobiliária. Demand was so great that SONIP had to suspend transactions, having reportedly sold 18,000 units in Luanda’s “New Centralities”.

Apartments were then distributed in dribs and drabs while SONIP updated its registers. Each week, the company published a list of beneficiaries, fuelling rumours regarding the legitimacy of the sales. Finally, in September 2013, SONIP announced that all remaining T3+1 flats had been sold. Those who had paid the deposit of US$6,000 but not yet received their keys were charged a further US$8,000 to obtain a larger apartment (T5). This provoked a new round of intrigue and protest.

The situation appeared to normalise during 2014 as buyers slowly began to settle in the New City. In July 2015, official news announced that Kilamba was now home to some 80,000 inhabitants. The typical resident is a thirty-year old, well-educated Luandan, employed in the formal sector, often with a young family. Despite criticism of the manner in which the apartments were distributed and of the traffic jams on the road to Luanda, living in Kilamba is now a source of pride. How to maintain the New City is a topic of intense debate on Facebook.

In terms of the governance, dos Santos initially claimed that Kilamba would be a model of municipal decentralisation allowing the direct participation of residents in decision-making. Instead, the nomination of a so-called ‘president’ to administer the New City, later replaced by the establishment of a special cabinet, dashed hopes of decentralisation and transparency, as well as the prospect of local elections. Thus, despite its novelty in terms of urban planning, the Nova Cidade de Kilamba has provided an opportunity for the central state to reinforce its influence over the lowest level of governance across the territory.

In this sense, the building of Kilamba and other “New Centralities” does not only echo the manner in which China has built ‘ghost cities’ well in anticipation of a middle class; it reveals the skilful reproduction of a political hegemony rooted in decades of ‘Afro-Stalinism’. With the ‘Angola mode’ of oil-for-infrastructure much debated across the continent, the settlements which follow Kilamba will prove a test for the nature of urban and political development in Angola.

Dr Buire is a post-doctoral research associate at Durham University, UK. She was previously a post-doctoral fellow at the University of the Witwatersrand, South Africa. In January 2016, she will take up a new post at the CNRS / Laboratoire Les Afriques dans le Monde, in Bordeaux, France. Her work on Luanda was originally published in African Studies under the title, ‘The Dream and the Ordinary: An Ethnographic Investigation of Suburbanisation in Luanda’.