A brief history of exclusion

Amidst great optimism about the potential for Africa’s cities to drive economic prosperity, Steve Ouma, Director of Pamoja Trust, offers a historical insight into the growth of Kenya’s urban centres. He argues that policies promoted by successive administrations have been defined by a history of colonialism, state-sanctioned slum evictions and a refusal to acknowledge the rights of the poor. As a result, the majority of the population has been excluded from social, political and economic participation in towns and cities.

The British colonial administration in Kenya subscribed to an urban policy that was emphatically racist. The city was intended as a residence only for the white population and a few support staff. This culture of inclusion and exclusion permeated the architecture of the city, which was designed to complement discriminatory social relations.

This colonial legacy shaped and informed the trajectory of urban development in the years – and decades – after independence. In the late 1960s and early 1970s, the government tolerated the migration of people to urban areas as part of the discourse of “freedom”. But this only propagated a crisis, as the surge in urban populations was not planned, nor did it fit into a wider economic project.  This triggered a new anti-urban movement. The Kenyan government emphasised the growth and development of agriculture by promoting the rhetoric of turudi mashambani – “let’s go back to the countryside”. 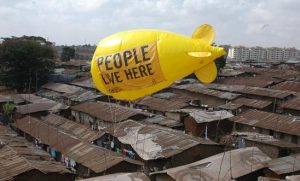 In the post-independence era a new discourse of inclusion and exclusion emerged. Urban areas were constructed as economic centres, purposefully undermining the notion that they could be places of native habitat or origin. This discourse was used to justify successive periods of large-scale evictions of people who resided on urban land without secure tenure.

The oil crisis in the late 1970s, which had the knock-on effect of instigating the demise of Kenya’s coffee and tea sectors, resulted in the loss of many jobs and a sharp fall in household incomes. More urban residents became economically – and physically – marginalised. In Nairobi, this led to intensive squatting on the fringes of the central business district. Mass government evictions took place in 1978-79.

The death of President Kenyatta in 1979 gave informal settlers a temporary reprieve as the new government sought to consolidate support. President Moi initially adopted a more laissez faire attitude to informal settlements, reducing the number of evictions.  But after an attempted military coup in 1982, the government quickly turned its attention back to controlling apparently “unruly” slum areas. Evictions became about reiterating state control, as well as restoring the power of title.

The decision by the government to sanction widespread austerity reforms under the pretence of Structural Adjustment Programmes prompted further swelling of informal settlements in 1987-1990. People could not afford housing. Food prices rocketed. Land title had little function, as people squatted in any unoccupied part of the city.

A new form of repression emerged in the 1990s. Keen to limit the growth of political opposition that was fomenting in the urban slums at the time, the government mobilised young, unemployed men into gangs in the guise of the Kenya African National Union (KANU) youth wing. Their purpose was to intimidate informal settlers, driving them out of the city. These gangs became notorious, and were linked to high-profile politicians.

It was against this backdrop that Pamoja Trust formed in 1999. The organisation was established in direct response to widespread and rampant evictions instigated, very often, by the state. It seeks to organise, educate and mobilise people to assert their rights and influence policies relating to urban development and poverty reduction under the broad concept of the “right to the city”.  In particular, Pamoja focuses on sustainable housing and community-led construction, security of tenure and planning.

Successive governments in Kenya have played a significant role in leading an urban planning discipline that is based, almost entirely, on a framework designed to exclude people from social, political and economic life in cities. This “disciplinary legacy” is one of the problems we face. The professions that deal with the built environment, such as urban planning, architecture, surveying and land economics, tend to be informed by a mode of reasoning that is highly exclusive. But planning must facilitate inclusion. We have yet to see this on a large scale.

For example, take Kenya’s Building Code, which stipulated that roofing should be thick and flat so that it can withstand snow. Why? Because the original piece of legislation was probably written in the 1950s by a colonial administrator from Coventry who used the same code that applied to his home in England.

Planning needs differ widely throughout Kenya. Nairobi grew out of a railway campsite and has always been “urban”. In Kisumu, however, people occupied the land before an urban settlement existed. Land is customarily owned. People rightly assert that they are not squatters, that in fact the city is squatting on their land. In Kenya’s Rift Valley, former Presidents Kenyatta and Moi are said to have appropriated large swathes of land. Those who were evicted were sent to Nakuru, which caused considerable tensions with the indigenous communities. In Eldoret, former President Moi wanted a large metropolis near his place of birth, so he ordered the construction of a university and airport for which there was little demand.

A more integrated model of urban planning must be adopted. The proliferation of informal settlements and the indignity associated with them cannot continue. It is only through the adoption of a new approach that urbanisation can result in a just and equitable society, rather than the perpetuation of inequality.