The idea that revenue authorities are central to building viable and accountable democracies is gaining greater traction in sub-Saharan Africa. Governments are recognising that the provision of social services and infrastructure developments will increasingly have to be financed with revenue from domestic sources. In many countries, however, revenue authorities must be re-built, and from scratch. Funding such endeavours is a complicated and expensive affair, often involving multiple donors. Below, Kieran Holmes, Commissioner General of the Office Burundais des Recettes – or Burundi Revenue Authority – explains how the organisation is funded and its priorities in the coming years.

The core funding of the Office Burundais des Recettes (OBR) – its budget – is agreed with the Ministry of Finance. Our target is to keep operating costs below 3% of all revenue collected. All of our past budgets have been in the 2–2.5% range, which is reasonable for a new revenue authority. In 2012, our budget was BIF13 billion (c.US$8.5m), or 2.5% of revenue collected. Once the OBR becomes more efficient, we should be able to reduce our requirement to 1.5% or even 1% of revenues collected.

About 75% of the budget is spent on salaries and other staff-related expenses. The remaining 25% is allocated to the running costs of the offices, transport, IT expenses and rent. This is all government money. Donor funding is only sought for technical assistance and capital expenditure. 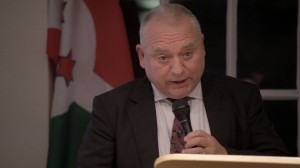 The UK’s Department for International Development (DfID) was the OBR’s inaugural donor. It was encouraged by its successful support of the Rwanda Revenue Authority (RRA). I spent eight years with the RRA before coming to Burundi, and during that time we negotiated a double taxation agreement with Belgium; drafted new income tax, tax procedures and VAT laws; and computerised customs and tax administration. Revenue collected by the RRA increased by 700% between 2003 and 2010. DFID provided it with £24m (US$38m) over an 11-year period. By 2010, the RRA was collecting that amount in revenue every two or three weeks.

In 2009, DFID pledged £11.5m (US$18m) as initial support to the OBR. When it closed its office in Burundi in 2011, the administration of DFID’s funds – and the task of acquiring new donor support – was taken over by TradeMark East Africa (TMEA), a regional programme that seeks to promote economic growth and poverty reduction through increased trade. By 2013, DFID’s overall contribution to TMEA had reached £16.5m.

Most of the funds that the OBR receives from donor organisations are channelled through TMEA. The TMEA Burundi programme started in 2010 and runs until 2016. It has a budget of US$50m, of which 40% is allocated to the OBR. Its principal sponsors are DFID and the Belgian government (Directorate General for Development Cooperation – DGD). The latter has announced that it plans to provide direct assistance to the OBR from 2014 through the Belgian Development Agency (BTC). In 2013, USAID agreed to contribute US$0.9m to the OBR’s communications and outreach programme – an essential part of our work. The OBR has also partnered with the World Bank for the acquisition of IT equipment and with the African Development Bank for the creation of one-stop border posts at Gasenyi/ Nemba and Ruhwa.

There is a formal agreement between TMEA and the OBR which outlines how much money will be released each year, and we agree in partnership how this money will be spent. The relationship between the two organisations has been a very positive one. Donors have always encouraged the OBR to develop its own priorities for institutional development. Our five-year Corporate Plan forms the basis of funding discussions. Donor support through TMEA is always project-based. It pays for things such as technical assistance, new computer systems, office renovation, specific training workshops and infrastructural development, including the construction of the one-stop border post at Kobero, on the border with Tanzania.

The biggest challenge going forward is financing the OBR’s 2013–17 Corporate Plan. We may need as much as US$40m of additional support in that period to develop the OBR as it should be developed. This is money that will not come from the government and must be found externally. We need to invest considerably more in our computer systems, our people, a modern headquarters, one-stop border posts and sourcing technical expertise when it is required. But we fully expect that investment to be returned many times over in terms of additional revenue, easier and expanded trade and reduced costs to businesses and taxpayers. Semi-autonomous revenue authorities generally provide good returns on donor money. By mid-2012, the Burundi government was receiving an additional US$8.30 in revenue for every US$1 invested by TMEA.

We are alert to opportunities to diversify the OBR’s external funding and take advantage of the specific interests and agenda of individual bilateral and multilateral donors. The Belgian government has announced that it plans to provide direct assistance to the OBR from 2014 through BTC. We are currently working very hard to improve our internal financial management procedures in order to take and pass a Fiduciary Risk Assessment by the end of 2013. This would enable the OBR directly to manage some or all of the funds received from donors and thereby reduce the time spent seeking approval for procurements. A project is currently being undertaken by the OBR, TMEA and BTC to design the next phase of support for the OBR in 2014–17. This should be concluded by the end of 2013.

by Kieran Holmes, Commissioner General of the OBR