For ease of reference, the salient points selected have been grouped under the headings:

-African cities already contribute between 50% and 70% to the continent’s GDP. The African Development Bank’s Urban Development Strategy document suggests the contribution is 55%.

-At present, rapid urbanisation in Africa is taking place amidst high unemployment and under-employment, insecure and unhealthy jobs, poverty and rising inequality: it is therefore “delinked” from economic growth and industrialisation, contrary to the experience of other world regions. Urban growth has also, in most cases, been unplanned and poorly managed and thus is characterised by informality, inequality and poverty while posing risks for the environment.

-For Africa to harness the significant potential of urbanisation and urban growth and to mitigate the real and likely debilitating negative effects, concerted policy interventions will be needed in at least four interconnected spheres: urban financial health; urban institutions and governance; physical health, spatial planning and design; political will.

“Participation, with a little more bite” by Edgar Pieterse

“Rising through cities? A look at Ghana” by Jeffrey Paller

-Population growth is rapid in both urban and rural areas, driven by persistent high fertility rates in some populous countries – in particular Nigeria, Tanzania, Democratic Republic of Congo, Ethiopia and Uganda. Major infrastructure investment is required in both domains – it is not a choice between the two.

-Ghana, Zambia and Tanzania are among the larger African countries where the urban median age is below 25 years.

-Africa’s population continues to exhibit “circularity”, characterised by rural-urban, urban-rural, urban-urban, rural-rural and cross-border movements that are not as pronounced in other parts of the world.

At current growth rates, Nigeria’s population living in urban areas is projected to increase by 208 million by 2050 i.e. more than the combined current national populations of Ethiopia, Sudan, Kenya, Zambia and Zimbabwe

-Since the 1990s a number of countries, including Zambia and Lesotho, have experienced periods of de-urbanisation, when the percentage of the population living in cities declines. The main drivers of this phenomenon are economic crises, high urban costs of living, better service provision in rural areas than cities and health crises such as HIV/AIDS.

-Three of the continent’s “megacities” – Cairo, Lagos and Kinshasa – each have populations larger than those of Africa’s 36 least populous countries.

-The momentum of urbanisation is likely to shift from megacities to intermediate cities and small towns which suffer significant infrastructure, governance and finance deficits that need urgent redress. The bulk of the growth will be absorbed by informal settlements and informal economies.

-27 African states have conducted credible censuses since 1996. However governments report limited capacity to expand and maintain improvements in the collection of vital data.

“Whatever happened to Africa’s rapid urbanisation?” by Dr Debbie Potts [and podcast]

“In conversation with Susan Parnell”

-Between the 1960s and 1990s, Africa’s urbanisation occurred at much lower levels of income and economic growth compared to other continents. Consequently, governments were left with insufficient capacity to finance capital investments in urban infrastructure, housing and services.

-Africa’s urbanisation has been characterised as growth in “consumption cities”, where industrialisation and manufacturing are declining or yet to develop; and by informality, urban sprawl, increasing inequality and persistent slum formation. As many governments have recognised, removing this structural weakness is a priority as economic growth since the 1960s has been jobless growth or with jobs created in low productivity informal and service sectors.

Throughout Africa, power deficits present in 1996 have worsened

-Economic growth since 1996 was higher than average population growth, a marked contrast to the two previous decades. The real GDP growth per capita (2.4% a year) has outstripped the growth in urbanisation level (1.1%) for a significant number of countries, but it has remained lower than the 3.5% urban growth rate.

-In Sub-Saharan Africa, informal employment comprises 66% of all non-agricultural employment. In Kenya, for example, as much as 76% of the labour force is now in the informal economy.

-Urbanisation has not enhanced the linkages between the rural and urban economies required for broad based development. As economies mostly remain export-oriented, the growth in demand for basic foodstuffs has been met through rising imports valued at US$25 billion a year. Growing urban populations generate real opportunities for agricultural production and value addition.

-Africa’s structural transformation will not happen without the continent taking charge of financing its development. Yet Africa’s debt burden endures, and when combined with systemic and sustained illegal financial out-flows the continent is a net creditor to the world.

Africans could be more than able to finance their own development; it is a damnation of Africa’s financial leadership that “Africa is rich but African are poor”

-Improvements have been observed in municipal finance and local revenue generation but this has not matched the level of the investments required to respond to rapid urban growth. In many urban centres, potential revenues have not been fully exploited.

-As urbanisation intensifies in a country, and especially if income levels increase, land becomes increasingly important in financing sustainable urban development. Local and national authorities still have a long way to go in terms of maximising urban land value capture through appropriate policies, legislation and taxation.

-For structural change to happen, policies, strategies and regulations are needed that will make Africa’s emerging small and medium towns not just a collection of new consumer markets for global goods and sources of cheap labour, but a place for innovations and thousands of new, competitive and highly distributive SMEs.

-Recent UN-Habitat data shows that the proportion of Africa’s population living in slums has been falling, from 62% in 1990 to 40% in 2014. There are significant regional and national variations. However, the high proportions and numbers of people living in slums remains of grave concern. Slums are the most extreme embodiment of multi-dimensional exclusion in African cities.

-The housing crisis is acute. Access to public transport and public space are crucial factors for social inclusion and poverty reduction.

-Poor urban services and unhealthy environments affect the poor, women and children the most. At the lowest income levels, health indicators for poor urban residents are often equivalent to, or worse than, those of their rural counterparts. 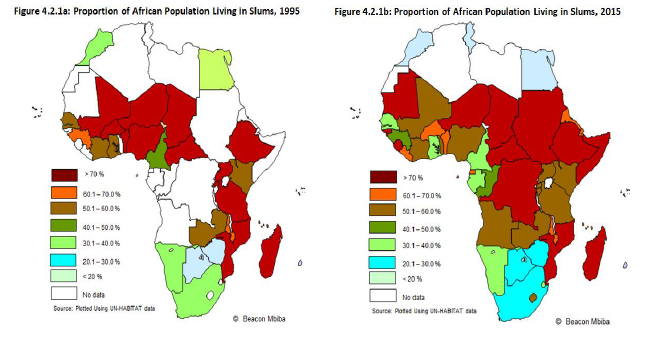 -Few African governments have implemented programmes to provide legal security of tenure, equal access to land and housing for all and protection from arbitrary evictions. In most countries, the majority of urban residents are still slum dwellers who occupy land whose rights and records are largely secured by informal systems not recognised by governments.

-Since 2000, Social Tenure Domain Models (STDM) based on participatory approaches and techniques to land information and record management have proven to be cost-effective, flexible, affordable, pro-poor and gender sensitive.

-Participatory community policing to prevent crime and to support/ complement national police forces is a common initiative in many countries, although with varying degrees of effectiveness.

“A federation of slum dwellers: in conversation with Irene Karanja”

“Views of suburban Luanda: banishing the ghosts from Kilamba” by Chloé Buire

-In the context of Agenda 2063, Africa has a unique opportunity to configure its infrastructure to lead in the emerging low carbon economy as opposed to replicating the fossil fuel dependent models used thus far.

-A major trend and environmental challenge facing urban Africa is spatial expansion and urban sprawl. There is a pressing need for compact city strategies and designs.

-Urban Africa faces increasing water scarcity due to droughts and lack of investment in water infrastructure. Aquifers are depleting fast.

-National and local governments have insufficient resources to manage the growing waste problem. Waste management is often one of the largest budget items for urban authorities.

-It seems the biggest hurdle to make planning interventions to reduce the ecological footprint of cities and address urban sprawl is a combination of lack of political will, weak institutional governance and inappropriate laws, rules and regulations.

“For town and country: A new approach to urban planning in Kenya” by Peter Ngau

“Flooding in Freetown: a failure of urban planning” by Jamie Hitchen

“How to make planning law work for Africa” by Stephen Berrisford

-The Habitat Agenda recognises that sustainable human settlements can only achieved through decentralised, accountable, citizen driven and financially secure local authorities. It calls for decentralised and locally accountable urban governance embracing increased citizen participation in decisions on issues affecting them; to select and de-select those who represent and those who govern them; and increased fiscal autonomy.

-Weak local government finances are compounded by a culture of political patronage; corruption is tolerated at all levels of governance.

-“Cost recovery” or “pay as you go” services appear to penalise the poor more than the rich. If they continue to expand as in other parts of the world, local governments would have to invest more in participatory governance – such as participatory budgeting – to enhance the chances of success for such programmes.

-Performance related grants to urban authorities have been piloted in many countries since the 1990s with some positive results.

-Most African governments at national and local levels face technical, human and financial limitations to plan for and manage rapid urbanisation.

-Countries are not taking urbanisation into account in their national development plans as a transversal mega trend.

-Land, which is poorly managed by urban authorities, needs to be viewed as potentially the main source of revenue to increase income available to spend per capita.