Power to the people? Prepaid electricity in Mozambique

In a time when climate change increases the urgency for an energy transition to a low-carbon future, another “transition” is happening in Africa: the widespread turn to prepayment for electricity provision. Over three-quarters of African countries have adopted, or piloted, electricity prepayment. Recent research shows that the use of prepayment for residential metering in sub-Saharan Africa rose from 27.5% to 42% between 2014 and 2016. South Africa has the largest share of the market, but Ethiopia, Ghana, Kenya, Mozambique, and Nigeria are not far behind.

Adoption of prepayment is far from consensual. For electricity companies the appeal of prepayment is obvious. Prepayment smart meters can “outwit Africa’s power thieves”; allowing the utility company to secure payment for electricity consumed and to monitor it remotely. But what are the impacts of prepayment on the poor? On the one hand it helps them budget for consumption and stay out of debt; on the other it imposes self-disconnections when money is in short supply. Much of the debate has focused on South Africa, where fights against prepayment are deeply enmeshed in the post-Apartheid struggle for equal citizenship rights. However, little is known about how prepayment is taken up in other African countries and what effects it has on how people use electricity.

The case of Mozambique

My own research in Maputo, Mozambique’s capital, points to a rather different story: one of widespread acceptance of prepayment. Maputo is home to an estimated 1.2 million people, 91% of whom live outside the “city of cement” (the historic colonial centre). In 2014, statistics from the state-owned electricity company Electricidade de Moçambique, E.P. (EDM), claimed that 91% of Maputo’s population is connected to the grid, with 93% of them using prepayment.

Prepayment was introduced in 1995 to address customer debt, curb electricity theft and improve EDM’s cash flow. After this first successful pilot project, EDM began phasing-out post-payment meters. Unlike in South Africa, or even the UK, where prepayment is targeted at the poorest households, EDM decided to make prepayment the default system for all residential and small business customers. Households requesting new connections were not given a choice: all were fitted with a prepayment meter. The perceived universality of prepayment may partly explain why Mozambicans seem so agreeable to this transition. On a formal level at least, all citizens are treated equally under the prepayment system.

For many Maputo residents, being connected to the grid is not synonymous with carefree electricity consumption. Households have to watch how much they consume to avoid running out. People learn to match specific amounts of money with a corresponding number of kilowatts per hour and days of consumption. By observing the speed at which the meter debits units, people work out how much electricity each appliance consumes. They then make judgements about which appliance(s) should stay on if they are running out of credit. In this “battle of the kWh”, the TV set usually wins over all other appliances – refrigerators included.

Most people I spoke to and observed buying credit at designated shops bought small amounts of electricity several times a month, from as little as 50 Meticais (US$1) up to 300 Meticais (US$6) a turn. This piecemeal purchase of electricity credit was a practice familiar to people reliant on uncertain incomes. “We live on estimates,” Manuel, who lives in Maputo’s Hulene A neighbourhood, told me. “You sit down and you add up the numbers, to see how much is going to be spent on food, charcoal, water, electricity and so on… We don’t have much to spend, so we need to make ends meet with the little we have”. 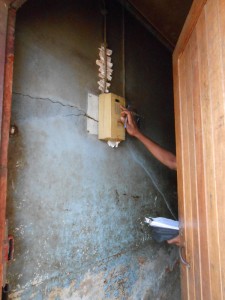 Residents of Maputo appreciate prepayment for the individual control over consumption it allows. It makes them feel autonomous and able to participate in the economy of conspicuous consumption they aspire to, and perceive to be a sign of prosperity and personal advancement, despite widespread unemployment, growing inequality and nepotism. “Everybody wants to be well in life. With [prepayment] no one is inhibiting me [from using electricity]. I’m the one saving it … If I had [a bigger] salary, I wouldn’t need to inhibit myself”, a resident of Mahotas neighbourhood told me.

Prepayment also allows citizens to avoid direct interaction with EDM, which many liken to a “thief”. Distrust of EDM built up because of years of conflicts over incorrect estimate billing with the post-payment system – a major headache households are glad to do away with.

The main drawback associated with electricity prepayment is queuing to buy credit. I suspect no one likes queuing, but research by Julie Archambault suggests that Mozambicans are particularly averse to it. Waiting in line brings back painful memories of the hardships of the civil war years when people had to stand in line for hours, even days, to try and obtain the most basic goods. Today, as then, queuing makes consumption visible to others, destabilising the complex balancing act between what one wants to appear – or to pretend – to have materially and symbolically.

Recent improvements in the sales management system and the roll out of digital sales in late 2013 have reduced the need to queue. Electricity credit can now be bought via mobile banking, mobile electronic wallet services, at ATMs or online. According to EDM, customers can now buy electricity credit “anytime, anywhere.” However, given the rising demand for electricity in Maputo and the infrastructural limitations of the grid, electricity may not reach everywhere, nor be available all the time for households to use up their credit.

The transition to prepayment taking place in Mozambique, as well as elsewhere in Africa, is not an assurance of universal, affordable, or reliable access to modern energy services. If African countries are to pursue the UN’s Sustainable Development Goal No. 7, then prepayment will certainly play a key role, especially in small and medium-sized cities like Maputo. But prepayment challenges the traditional ways of rolling out urban infrastructures. We need to pay more attention to what kind of socio-technical energy system it is engendering, not just what kinds of conflicts it brings about. In other words, we need to learn more about what kind of cities prepayment is creating in Africa.

Idalina Baptista is an Associate Professor in Urban Anthropology in the Department for Continuing Education at the University of Oxford. Her latest research and publications focus on the colonial and post-colonial geographies of urban energy infrastructure and urbanisation in African cities, with a special focus on Maputo, Mozambique.She tweets @idalinabaptista