The Rise of Debt in Africa

This article first appeared in the Business Daily and is reproduced by kind permission of the editors and the author.

Often when a conversation on debt in Africa emerges, the focus is on public debt. And this is warranted as African governments are accumulating a significant amount of debt. Since 2007, countries such as Zambia, Ethiopia, Rwanda, Kenya, Ghana, Senegal and Cote d’Ivoire have issued sovereign bonds worth over USD 25.8 billion. In terms of local debt, African local debt stock rose from USD 150 billion to about USD 400 billion between 2004-14. In Kenya, government has already overshot its fiscal year debt target having borrowed KES 147.1 billion against a target of KES 106.0 billion.

Debt accumulation is unlikely to slow in the near future due to several factors: firstly, Africa needs to spend USD 600 billion-1.2 trillion to implement the sustainable development goals according to the UN Conference on Trade and Development (UNCTAD); there is impetus to spend and thus borrow. Secondly, Africa continues to be an attractive market for debt. According to Bloomberg, yields on Kenya’s 5-year and 10-year Eurobonds declined by 2.8% and 1.9%, respectively from the mid-January 2016 peak, perhaps indicating that Kenya continues to be attractive investment destination able to attract even more debt.

There are serious, multi-layered concerns with the accrual of debt by African countries. The most obvious is sub-par domestic revenue generation which compromises the ability of African governments to service both domestic and foreign debt sustainability. Foreign debt has additional risks: falling commodity prices have compromised the ability of African governments to raise forex; the strengthening US dollars makes servicing foreign debt more expensive and as the global economy recovers, there are forecasts for higher global interest rates. An additional point of concern asThe Economist points out is that African governments are getting more money from private creditors. Official lenders are more willing to reschedule or reconfigure payment terms if governments get into trouble; private lenders are less willing to do so. 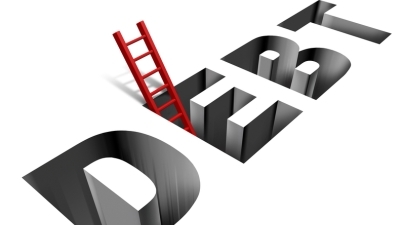 An additional overall concern is financial mismanagement and its implications on debt. Corruption spikes the costs of public projects to accommodate expectations of kick-backs by public officials thereby increasing borrowing demands beyond what projects actually warrant. Secondly, embezzlement of public funds means money does not reach intended projects, reducing the economically regenerative power of said projects.

However there is another, less publicised debt problem emerging on the continent: private debt.Figures on private debt in Africa (Kenya included) are hard to come by but perhaps a look at mobile loan figures may be indicative to the growth of private debt. According to the Business Daily, KCB-MPESA disbursed KES 10.3 billion to customers since inception to September 2016 and Equitel has issued KES 20.8 billion in loans since June 2016. Debt is a feature of life to Kenyans and Africans be it in the form of loans from mobile platforms, commercial banks, MFIs, SACCOs or merry-go-rounds. And it not only the rich and middle income individuals getting into debt; even low income individuals are accruing debt. Conversations with informal business people indicate that the presence of credit vendors has encouraged a pattern of a single individual receiving essentially unsecured loans from numerous credit vendors at the same time. This individual then faces massive financial pressure to repay numerous debts and is often unable to do so sustainably.

Clearly, there is a need to further unpack the scale of private credit amassed in Kenya and continent to better understand the continent’s actual debt stock. Further, while African governments ought to be more prudent in debt subscription, perhaps the same ought to be promoted among private borrowers, many of whom do not necessarily have the financial literacy skills to fully appreciate the implications of debt and how to service it sustainably.