Tanzanian Politics at a Crossroads: Scrutiny and Scandal in the United Republic

With less than a year until voters elect a new parliament and a successor to President Kikwete, and with a constitutional referendum scheduled for April 2015, this is the first in a new series of ARI blogs examining Tanzanian politics at a critical juncture.

“The ideal situation is to have the teeth, and also to have the meat to chew on” Samuel Sitta, Speaker of the National Assembly, 2008

In 2008, a cross-party group of ‘activist MPs’ began working to reform Tanzania’s parliament – Bunge, in Swahili – into a more assertive body, better equipped to carry out its constitutional ‘oversight’ and ‘challenge’ functions. ARI collaborated with three eminent members to produce “A Parliament with Teeth“; a frank report on the reforms, the arguments, and the outlook.

The authors were Samuel Sitta, Speaker of the National Assembly representing the ruling party, Chama Cha Mapinduzi (CCM); Dr Willibrod Slaa, Secretary General of the opposition Chama cha Demokrasia na Maendeleo (Chadema); and John Cheyo, chairman of the Public Accounts Committee from the United Democratic Party (UDP). Each made independent contributions; however, common to all three was the sense that Tanzania had embarked upon a course of profound institutional transformation. 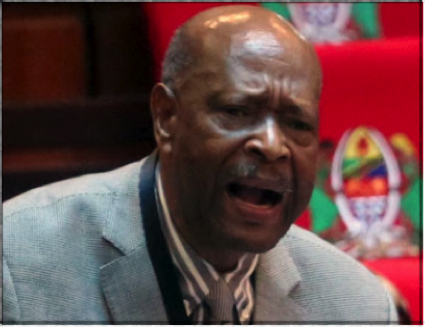 Hon. Cheyo served as MP for Magu constituency between 1997 and 2000, and has been the representative for Bariadi East since 2005. He is the only sitting MP for the United Democratic Party.  Until recently, he chaired the Public Accounts Committee (PAC). He is now a member of the Budget Committee and also the chair of the Tanzania Centre for Democracy, an organization which works to promote multi-party democracy in Tanzania.

Tanzania’s record of stability has rested in no small part on a political system centred on a powerful executive – established by the United Republic’s first president, Julius Nyerere. Tanzania under Nyerere was a single-party system focused on achieving agricultural self-sufficiency. This goal was not realised, and its pursuit left Tanzania deeply reliant on donor aid.

A strong executive and single-party system did not altogether preclude democratic development. First-past-the-post elections of party-approved candidates ensured that elites were at least rotated through influential positions, and created an environment where campaigns examined local issues with vigour.

Scrutiny of the executive, however, was not among the democratic practices established by the time multi-party democracy was introduced in 1992. The high turnover of legislators precluded institutional development, while a focus on local issues diverted attention from national politics. Government accountability was lacking until the accession of Jakaya Kikwete to the presidency in 2005. This constituted an unprecedented opening for parliamentarians eager to build a more critical, effective Bunge.

It was not long before Bunge’s nascent powers were tested by a double-header of public controversies. The Bank of Tanzania scandal in 2005 provided a wake-up call. Two years later, the Richmond scandal became an opportunity to set a precedent. In the preface to ‘A Parliament with Teeth’, Mark Ashurst, then Director of ARI, wrote:

“At our first meeting in July 2007… Mr Sitta told me categorically that the majority party would veto any proposal for a parliamentary enquiry into an issue of serious public controversy. This was cause for regret in his view, but a reality. By November that year, Mr Sitta was instrumental in appointing Tanzania’s first credible select committee to carry out the Richmond Enquiry into a controversial electricity supply contract.”

From the introduction of Prime Minister’s Questions to ministerial resignations, the institutional developments of the period had significant implications for Bunge’s financial and administrative independence, its access to information, and capacity to hold government to account. However, these were fledgling shifts, not established norms.

Other issues remained live and unresolved at the time of publication. ARI’s contributors were frustrated with Parliament’s inability to scrutinise spending of donor funds. All three anticipated the need for constitutional reform. Six years on, a new constitution has been drafted and a constitutional referendum slated for April 2015. A new president will assume office in October 2015. Meanwhile, donors have frozen funds worth US$490m as another corruption controversy – the IPTL scandal – is investigated. This is, therefore, an opportune moment to revisit “A Parliament with Teeth“.

To the parliamentarian authors, institutional development meant two distinct but potentially mutually reinforcing things. Firstly, it was about the push for the financial and administrative independence of notionally independent bodies; and secondly, the extension of facilities and opportunities for scrutiny of government spending.

At the invitation of CPA UK, ARI met with a delegation of Tanzanian MPs from the newly established Budget Committee to discuss the changing character of Bunge in 2014. The delegates included co-author, John Cheyo. 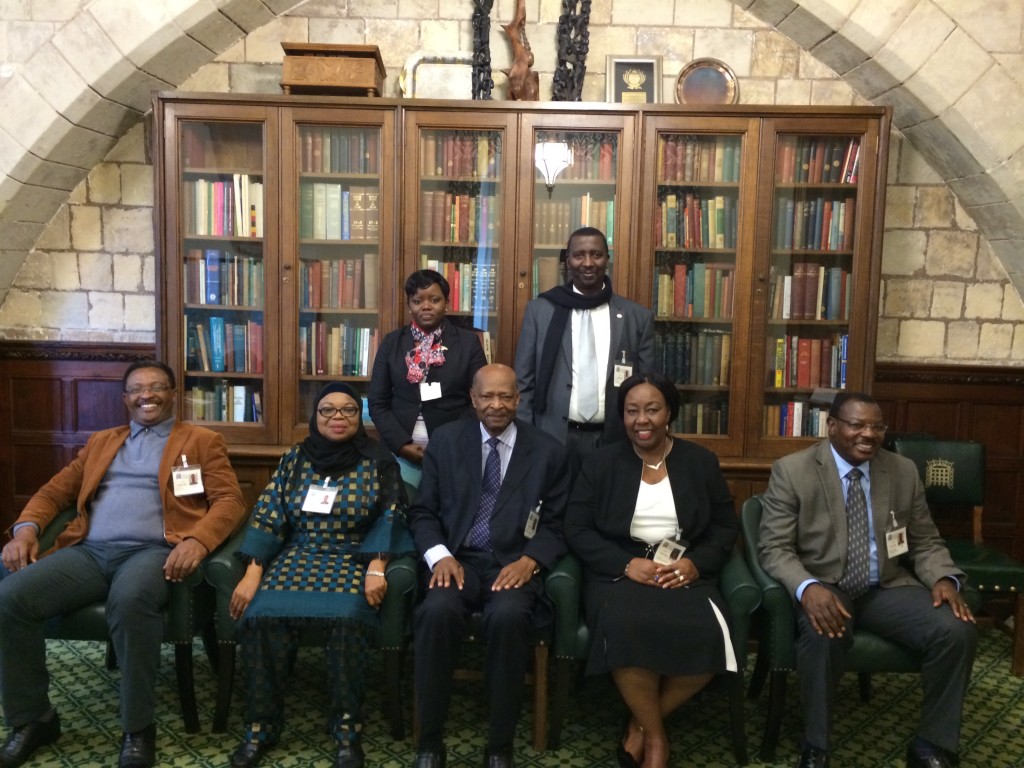 Delegation of Tanzanian MPs on a visit to London organised by the CPA UK; Rachael Cox

The creation of a National Assembly Fund in 2007 promised financial independence for Bunge. It meant no longer needing to channel funding requests through the civil service, and permitted the roll-over of unspent funds to the following financial year. It gave Bunge the autonomy to interact directly with donors working on parliamentary strengthening initiatives. For Cheyo, the practical promises of the fund included proper training for staff and the resources to bolster committee efficacy. Crucially, it seemed to signal a normative shift. As Samuel Sitta wrote in 2008, the establishment of the fund was “a sign that the government has accepted that parliament should be completely independent”.

“We have shown the Tanzanians that there was a need for a budget committee. Nobody can now say [government] are going to parliament for a rubber stamp.” John Cheyo, 22 October 2014

Our conversation with the delegation from Bunge suggested that the promise of financial independence has not been fully realised in the intervening six years. Although the law enshrining the financial autonomy of Parliament remains in force, earmarked funds have not been released in full. However, Cheyo was keen to assert that this was just a matter of time, not a reversal of 2007’s legislative victory. “I am not surprised,” he told us; “all executives, all over the world, are always reluctant to give away the power of the purse.”

Development of the National Audit Office (NAO), however, appears to be progressing faster than anticipated. This body, under the Controller and Auditor General (CAG), is fully independent and provides figures which are indispensable to the PAC’s oversight work. In 2008, Cheyo underscored this relationship: “The PAC is becoming more effective because the quality and detail of our information is getting better.” Last month, he again emphasised the importance of its strength once again: “I think any Parliament without a strong supreme audit institution is paralysed.”

Institutional independence has clearly advanced with the creation of fourteen new NAO regional offices since 2006. While the financial independence of the Audit Office, like that of the National Assembly, remains notional, it is important not to underestimate the significance of achievements to date. Extending the reach and capacity of the NAO can only enhance Parliament’s ability to scrutinise government expenditure. Indeed, Cheyo stressed his confidence in the CAG’s ability to deliver a reliable report on the IPTL controversy despite the current office holder, Ludovick Utuoh, having retired in September.

Beyond the rubber stamp

Parliament’s institutional development since 2008 has not been restricted to the extension of its oversight function. Under the leadership of Speaker Anne Makinda, Bunge has taken up a new function: budget scrutiny.

Created in 2013, the Budget Committee is charged with analysing the budget and presenting a report of its findings to the House. Through the committee, Parliament – for the first time – has a mechanism for making recommendations to the government on economic policy. Cheyo explained the profound significance of this:

“When you put in place a budget committee, you are entering into the traditional domain of the executive. Now, you are making the budget process more participatory, more inclusive – involving parliament… We are getting a parliament which is also a budget-making parliament, rather than just a budget-approving parliament.”

Cheyo is in no doubt about the positive impact of the Budget Committee: policies which were labelled unaffordable have been funded, he says.

Under Kikwete’s supportive presidency, dynamic MPs like Cheyo have clearly driven a shift in Bunge’s character and influence. However, the election of a new parliament and president in October 2015 will be a major test. Even before then, there remain sizeable stumbling blocks. Donor funding, which constitutes a large proportion of Tanzania’s national expenditure, bypasses Bunge’s oversight mechanisms altogether. Cheyo phrases his view unequivocally:

“The people who have the right to hold our government to account is the parliament of Tanzania… Why then should this right be taken by civil servants of donor countries? They are a mini-parliament controlling our executive, which, in my opinion, is quite wrong.”

In the next instalment in this series, ARI will examine this problem of ‘parallel accountability’ where the executive reports directly to aid donors, undermining the role of parliament.

Home page image: Delegation of Tanzanian MPs on a visit to London organised by the CPA; Rachael Cox