How Kenya is Failing to Create Decent Jobs

In 2011, an African Development Bank report categorised one-third of Africa’s population – about 313 million people – as “middle class”.1 The term was controversially applied to those earning between US$2 and US$20 a day. The growth of a middle class in Africa has been widely celebrated in reports by international consultancies and investment banks eager to stimulate investment – and fees. A burgeoning middle class should boost tax revenues and consumer demand. It is generally considered to be good for political accountability and democracy, and a catalyst for social development, job creation, innovation and poverty reduction.

This narrative is problematic for many reasons. Middle classes are heterogeneous: their characteristics vary country by country. Most reports celebrating Africa’s rapidly growing middle class assign membership on the basis of income. But middle class and middle income are not synonymous and should not be conflated. “Class” is a socio-economic concept typically defined by many more indicators than income alone. Indeed, in contemporary Africa it is questionable whether Marxist-Weberian definitions of “class” fashioned in the West have any relevance at all.

This Counterpoint uses pay as you earn (PAYE) taxation data from the Kenya Revenue Authority to define and analyse middle-income earners in formal employment in Kenya. Individuals in this group may consider themselves, or be considered by others, to be “middle class” – or not. In 2015, they numbered fewer than 275,000 among a total population of more than 40 million. The analysis reveals important information about job creation and wage trends. It demonstrates that the number of middle-income earners, who are likely to comprise a substantial proportion of a middle class, is small and not expanding any faster than gross domestic product (GDP) growth. This has important implications for Kenya’s economic and social development.

MORE THAN THREE-QUARTERS OF EMPLOYED KENYANS WORK IN THE INFORMAL SECTOR, WHICH IS GROWING MUCH FASTER THAN FORMAL EMPLOYMENT
According to the 2009 Census, 17.8 million Kenyans aged between 18 and 60 years were classified as “eligible workers”. This constituted 46% of the total population of 38.6 million.

In 2009, there were 10.7 million jobs, a number that increased by 42% to 15.2 million in 2015. On the face of it, the number of new jobs might look impressive, outstripping gross domestic product (GDP) growth averaging about 5% a year during the period. However, as can be seen, most new jobs were in the informal sector. While those in salaried formal employment increased by 28% from 2.0 million in 2009 to 2.6 million in 2015, the number of workers with informal jobs increased by 44% from 8.7 million to 12.6 million. By 2015, 83% of eligible workers were employed in the informal sector, an increase of two percentage points since 2009. 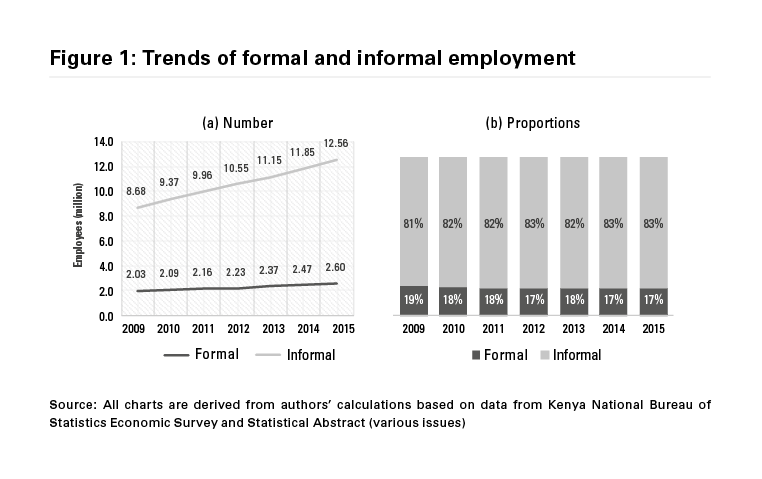 “Decent” work, as defined by the International Labour Organization, is the exception rather than the norm in Kenya. Figure 2 shows that between 2009 and 2015 the formal sector grew very little relative to the total number of eligible workers despite sustained economic growth.

MOST WAGED EMPLOYEES ARE LOW-INCOME EARNERS 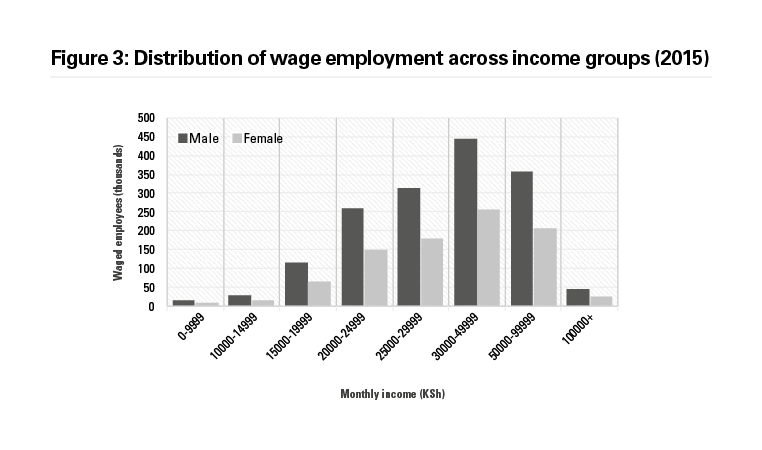 WHO CAN BE (REALISTICALLY) CLASSIFIED AS MIDDLE INCOME?

There is no universally accepted definition of middle income. Identifying an income threshold is by nature reductionist and imperfect: individuals who are very close to the boundaries of an income category are unlikely to be distinct from their peers across the boundary.Many studies use household data to analyse income groups. This has limitations, partly because of the dependence on self-reporting. For this Counterpoint, we have used pay as you earn (PAYE) tax data from the Kenya Revenue Authority. While the data self-evidently exclude anyone working in the informal sector, it is implausible that many have enterprises whose success would place them in the middle-income bracket. The Kenyan National Bureau of Statistics (KNBS) verified our data.

We define Kenya’s middle-income earners in formal employment as those whose monthly earnings are between one and two standard deviations above the mean (average). Our approach is based on a number of considerations. The first is that the definition should be associated with a degree of professional capability and skills that are most probably tradable. The second is that the cohort must be sufficiently distinct from lower-income earners and those who earn far higher wages than average. In this context, the classification of middle income by KNBS as KSh24,000 (US$240)–120,000 (US$1,200) per month is so broad as to include virtually all wage earners. A lower limit of one standard deviation above the mean has been used by others and seems appropriate for Kenya, given the comparatively low incomes. A figure close to the mean would fail the test of distinctiveness and measure of professional capability. 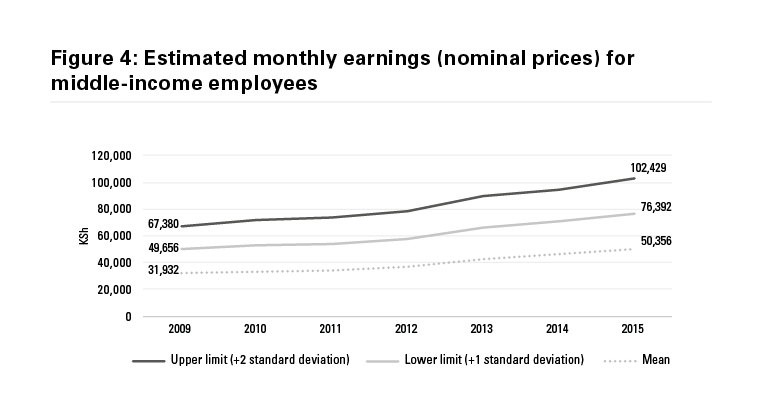 There was a very substantial decline in the number of individuals in the higher income bracket after 2012. It should also be noted that the growth in the middle-income group is uneven: in 2011-2012 it contracted. 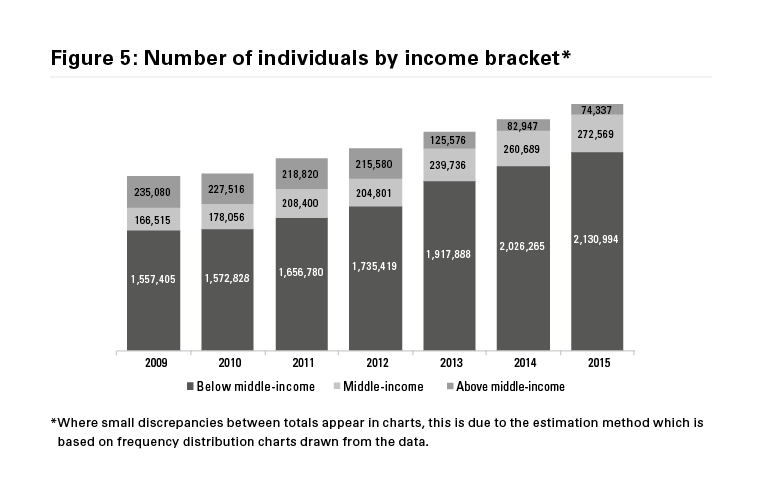 DESPITE A RAPID INCREASE IN MIDDLE-INCOME EARNERS IN THE PUBLIC SECTOR, THE MAJORITY ARE EMPLOYED IN THE PRIVATE SECTOR 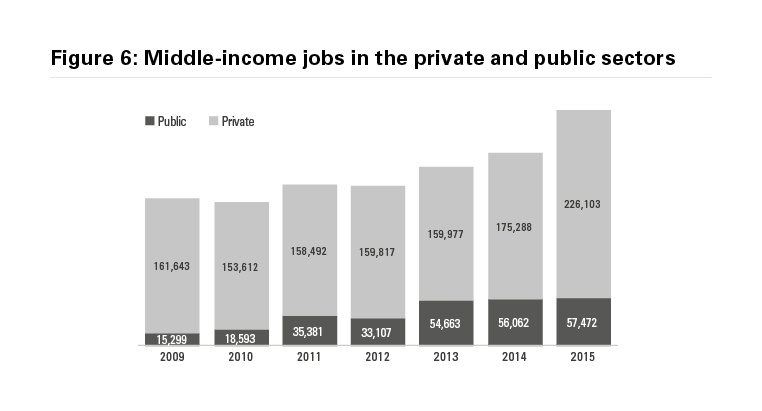 Figure 7 (a) shows the breakdown of all wage earners in the public and private sectors, while Figure 7 (b) illustrates the proportions of private and public sector wage earners within the middle-income bracket. In (b) it can be observed that the private sector accounted for 91% of middle-income employees in 2009, reducing to 75% in 2013, but then increasing by 5% to 80% in 2015. 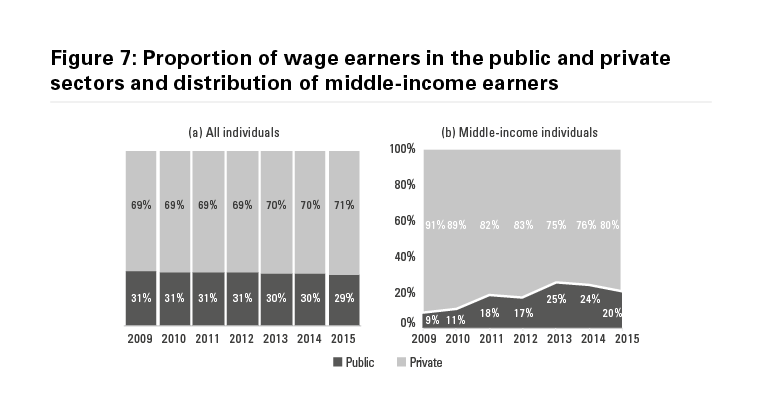 The increase in the proportion of middle-income earners in the public sector in 2012–13 can be attributed to the provisions of the 2010 Constitution, which brought about restructuring in the public sector and the creation of new commissions, legislators and county officers. According to KNBS, the KSh19.8 billion (US$198 million) in wages the new county governments paid in 2013 was 59% higher than the KSh12.5 billion (US$125 million) sub-national government paid the previous year.3

THE SHARE OF MIDDLE-INCOME EARNERS IS INCREASING IN THE PUBLIC SECTOR, BUT STATIC IN PRIVATE SECTOR 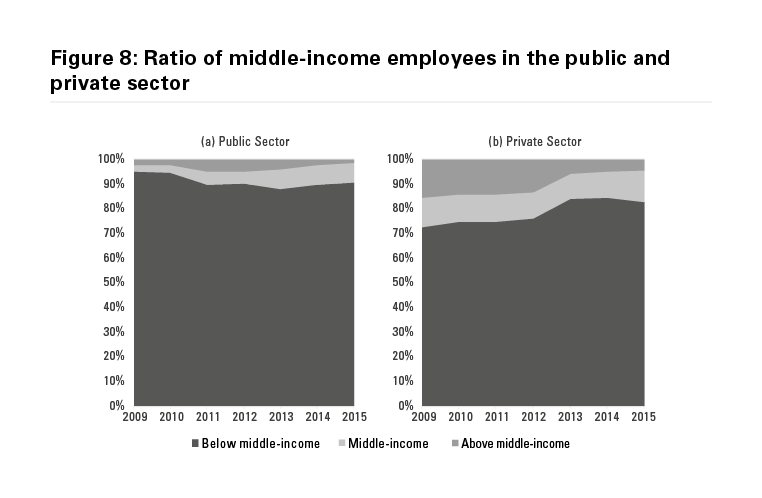 THE PROPORTION OF WOMEN IN FORMAL EMPLOYMENT AND AMONG MIDDLE-INCOME EARNERS IS INCREASING, BUT WOMEN REMAIN A MINORITY 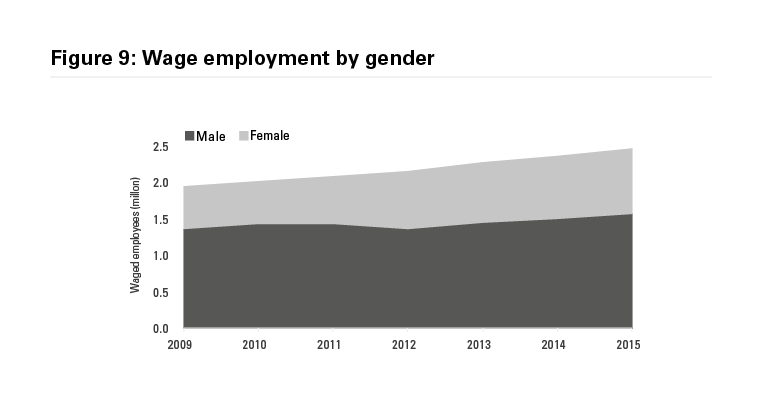 However, according to KNBS data, the proportion of women in the middle-income bracket appears to have been broadly static at 30%. 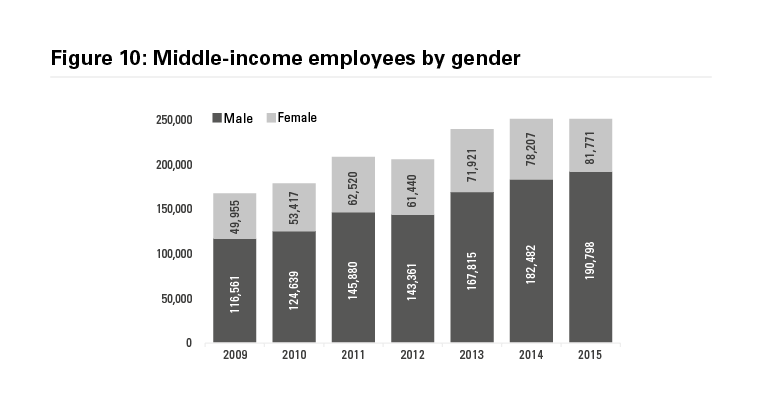 Figure 12 shows that the top five sectors accounted for 63% of Kenya’s middle-income earners in 2015. 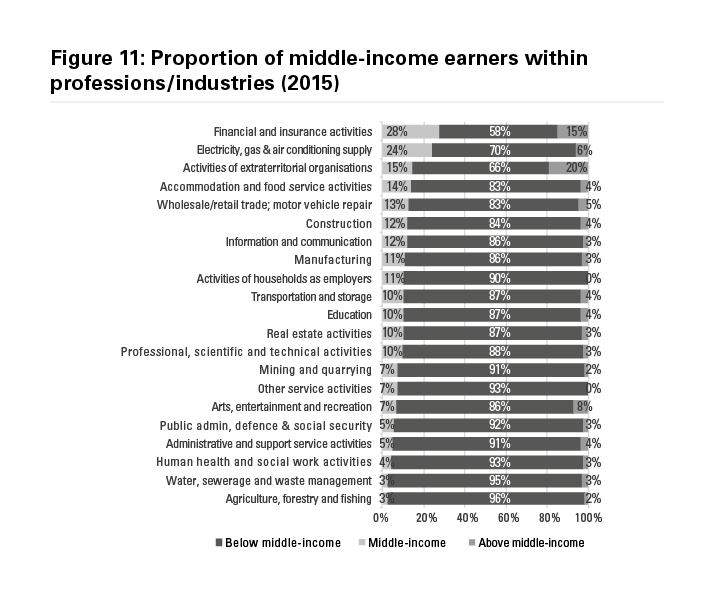 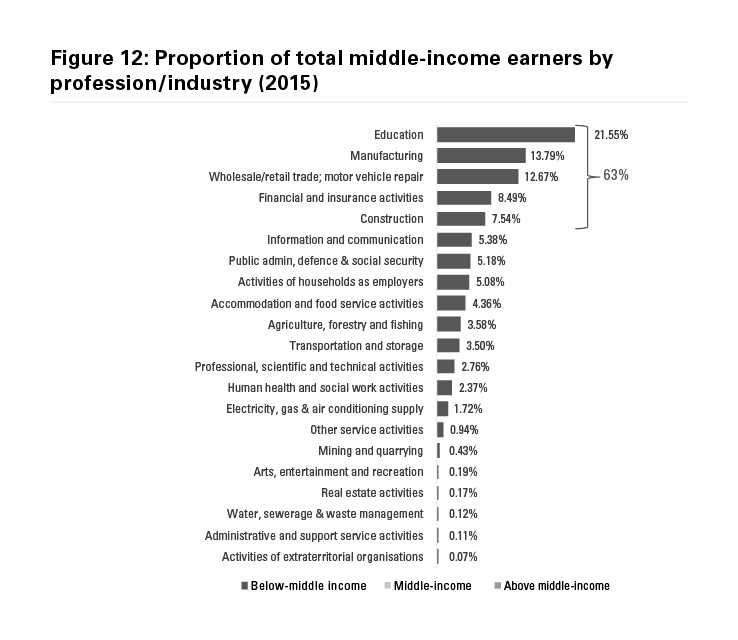 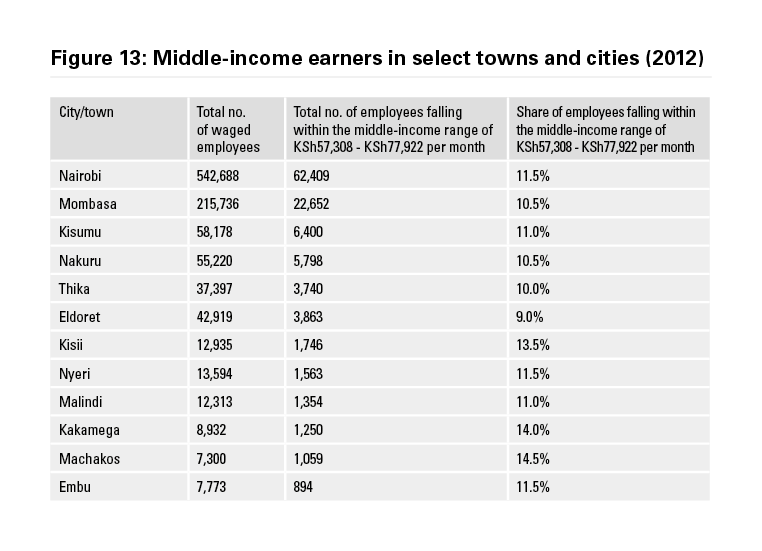 REAL WAGES DECLINED AMONG MIDDLE-INCOME EARNERS DUE TO INFLATION 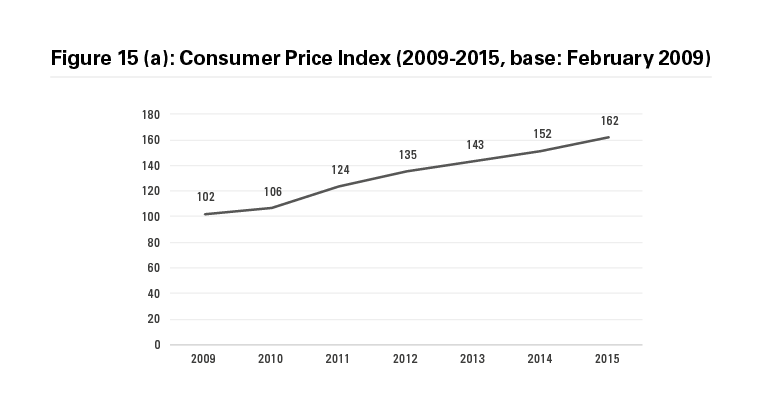 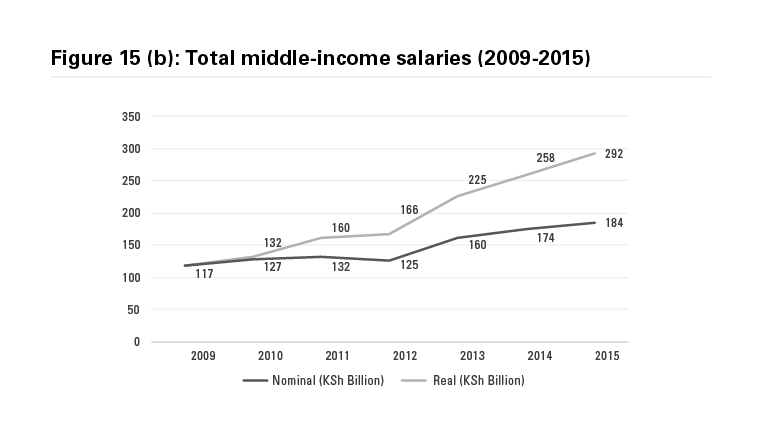 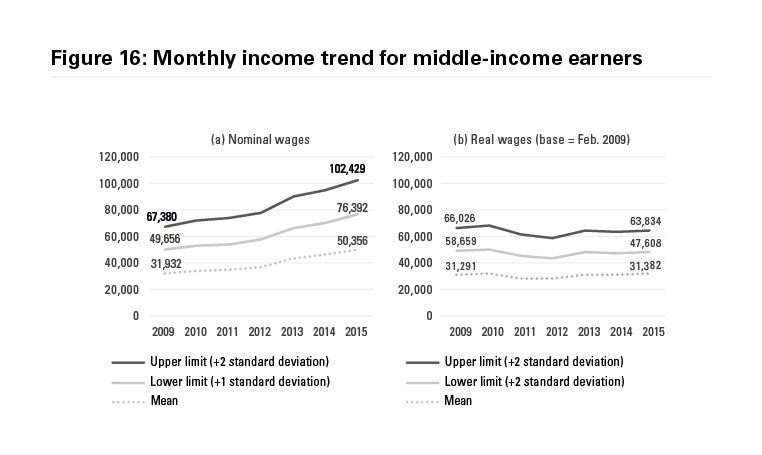 WHILE THE REAL WAGES OF MIDDLE-INCOME EARNERS HAVE NOT INCREASED, TAXATION HAS 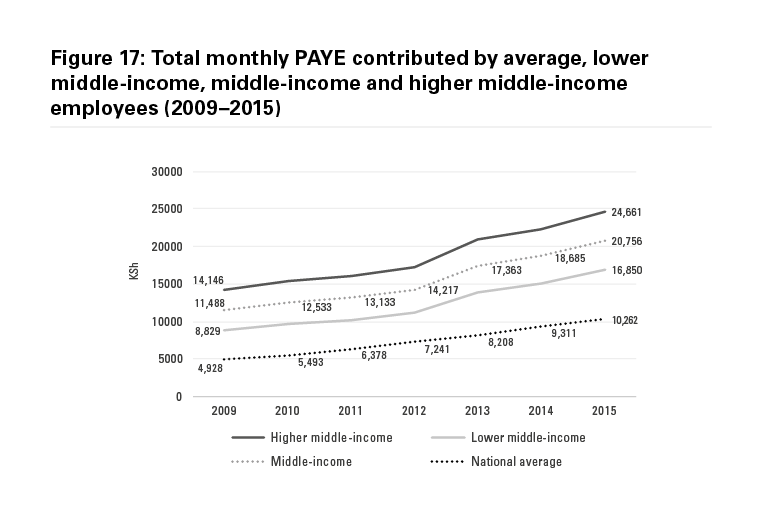 Notably, average earners saw their tax rate rise the most during the seven-year period, from 15.4% to 20.4%. 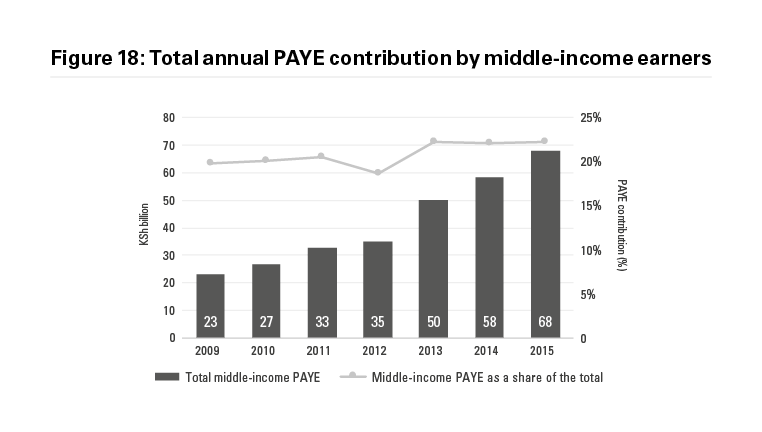 There is a strong correlation – indicated by a coefficient bracket of 0.97 – between GDP growth and the number of middle-income earners. Figure 19 shows that total wages earned by middle-income employees were 4–5% of GDP throughout the seven-year period. 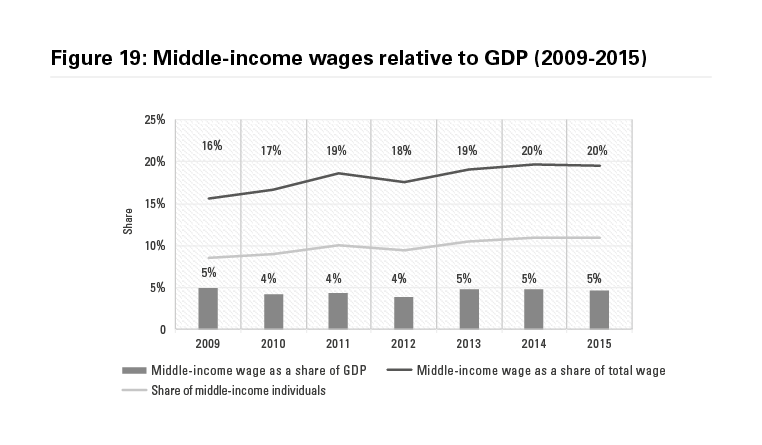 Kenya has the fourth-largest economy in sub-Saharan Africa after Nigeria, South Africa and Angola. Successive governments have promoted economic growth as the main driver of job creation. The national development plan, Vision 2030, aims “to transform Kenya into a newly industrialising, middle-income country providing a high quality of life to all its citizens”.Employment is increasing in Kenya, but formal jobs are not being created by labour-intensive industries and wage earners remain predominantly low income. More than three-quarters of all jobs are in the informal sector, which is growing far faster than waged employment in the formal sector. By and large, formal employment is treading water: despite sustained economic growth, the increase in the proportion of decent jobs relative to the total number of eligible workers is negligible.

If dynamic job creation and structural transformation of the economy were taking place it would be reasonable to expect to see rapid expansion of the number of middle-income earners and their share of the salaried workforce. In 2015, fewer than 275,000 individuals earned between KSh76,392 (US$764) and KSh102,429 (US$1024) per month – 11% of all Kenyans in formal employment. This small group is concentrated in the private sector, in service industries and in the two main cities. Inflation completely eroded wage growth in 2009–15, but taxation increased. Total wages earned by middle-income employees are increasing at no greater rate than GDP growth.

Decent jobs are essential for poverty reduction and social and economic development; and to generate increasing tax revenue to finance that development. The failure to stimulate a surge in decent jobs is a pressing concern. The working age population is forecast to increase by nearly nine million people between 2015 and 2025,5 a number almost equivalent to the entire informal sector in 2015. Furthermore, as most jobs are of necessity being created in the informal sector, Kenya’s labour productivity is low and static, indicating that while there is GDP growth the quality of the labour force is worsening. This situation presents a conundrum: labour productivity has to rise for incomes to rise.

To return to the debate about emerging middle classes in Africa, an intention on the part of policymakers to foster a growing middle class is welcome. But it is not useful to proclaim that a burgeoning and thriving middle class exists when the evidence for rapid growth in the number of middle-income earners relative to all wage earners and the working age population is non-existent. By analysing middle-income earners, this Counterpoint asserts that this is largely the case in Kenya. The structure of the economy is little changed since independence. Unfortunately the myth of a growing middle class merely shields decision-makers from answering for their failure to create decent jobs and greater prosperity.

1. African Development Bank, “The Middle of the Pyramid: Dynamics of the Middle Class in Africa”, 2011

2. The average exchange rate for 2015 was US$1:KSh98.2 (Central Bank of Kenya statistics). A rounded rate of US$1:KSh100 has been used throughout for guidance