Increasing attention is being paid to economic recovery in Sierra Leone, Liberia and Guinea. The term ‘recovery’ is problematic. It can imply a reversion to the way things were before Ebola. But rapid GDP growth then did not ‘trickle down’ – wealth remained concentrated in the hands of a small minority while poverty rates were among the highest in Africa. Economic diversification was minimal. The informal sector, which bore the brunt of Ebola, remains the dominant source of income in cities and rural areas alike.

Expert panellists Robtel Neajai Pailey (RNP), Ade Daramy (AD) and Biro Diallo (BD) discussed what needs to change in the way Sierra Leone, Liberia and Guinea manage their economies and how this might be achieved.

AD: Kono district has been the engine of mining in Sierra Leone for forty years yet it is a complete developmental backwater. I do not believe that extractives companies work in the long term interests of the country. Sierra Leone’s rapid GDP growth before 2012 was driven by mining, but where has it got us?

RNP: Liberia has an excellent revenue code. All six concession agreements signed since 2003 have included a requirement for social development funds. Deals cannot be struck without community or civil society involvement and scrutiny. However government oversight of implementation of provisions has been non-existent. We need a radical rethink on extractives. The sector was driving GDP growth of 7-8% but two-thirds of the population is below the poverty line. Agreements with mining giants like ArcelorMittal need to be revisited to ensure that more taxes are paid in-country, that there is greater accountability, and that they follow the rules and regulations set out in the legal code.

BD: I work in the mining sector but I am also a Guinean. I want all the industry’s corporate social responsibility (CSR) projects to work, but mining companies should not be confused with development agencies. We cannot change the fortunes of an entire nation on our own. Some projects we develop and hand over are then not properly run by the government or local authorities. People need to decide what they can realistically require from miners. If proper structures are laid down, we will have to follow them and we will be happy to do so.

AD: One always hears about Sierra Leone’s high rainfall and fertile soil, but modern farming techniques are required to make the most of favourable conditions. Government only pays lip service to farmers. More support for small-scale farmers is essential and one way the government could help after Ebola is to provide seed funding. People are beginning to see the potential in agriculture and there is progress. Waitrose will be selling Karma Cola in 200 stores from July; ginger is being exported to Benelux. The potential of our marine resources also needs to be realised. We need to pretend that we never had mining when planning for the future.

RNP: Agriculture accounts for a quarter of Liberia’s GDP and half the workforce. But there is 80% food insecurity, land tenure systems need to change and large-scale land grabs are reducing access to land. The Minister of Agriculture has been very vigilant about seeking capacity building opportunities for young professionals at the Ministry. There are positive policy developments to build on, such as the 2009 Back to the Soil Initiative.  The economic empowerment of women is crucial. They are the backbone of agriculture, the informal sector and regional trade.

BD: In the coming lean season, one third of Guineans will be food insecure. Agriculture has not been very highly regarded in Guinea for various reasons. If you had an agriculture degree, people would look at you differently. But more young people are realising there is money in agriculture and the government is promoting it. Land is plentiful, but you also need capital and much better infrastructure. There are undoubtedly opportunities: it was only when regional markets collapsed due to Ebola that Guineans discovered tomatoes were grown in their country.

BD: The government gets blamed for everything in Guinea. If a tree falls down across the road, it’s the government’s fault. This is a negative legacy of the Sekou Touré era. That said, communication has been poor during the epidemic. Mining companies always want good, resolute leadership wherever they operate. Elections in October 2015 will be a judgement of how well President Alpha Condé has led the country.

AD: Ebola exposed the lack of trust between citizens and the state in Sierra Leone and compounded it. In 2013, there were suggestions that President Koroma would seek a constitutional mandate to run for a third term and his party seemed assured of another victory. Now, his handling of Ebola has finished off any prospect of a third term and his party could conceivably lose the election. Corrupt politicians are unconcerned by accusations levelled at them.

RNP: People are completely disillusioned with the government. In December 2014, Liberia held legislative elections for 15 senators. Only two were re-elected. During Ebola, citizens quickly realised that they had to take matters into their own hands. The US$604m draft national budget, if passed, allocates one third  of spending to government salaries against US$73m on health and a similar amount on education. A health care officer earns a fraction of a legislator’s pay. This sort of thing cannot continue. We have had a wake-up call.

On the Mano River Union (MRU)

AD: Just as Ebola did not separate the countries of the Union, neither should the response. The interconnectedness of Liberia, Guinea and Sierra Leone can be an advantage. Planning across countries is essential.

BD: The MRU structure is there, it is a good platform to allow for discussion and the pooling of resources.

RNP: There has been some regional solidarity, but we need to do more together, for example in deciding and setting out exactly what we want from foreign direct investment in the region. Harmonisation of legal codes would be helpful and a regional medical centre of excellence would be a good idea for obvious reasons.

RNP: The government of Liberia needs to pay better salaries to health workers and teachers, give them better incentives, opportunities for learning and see it as a long-term investment in the country’s future.

AD: Ebola has exposed the fact that virtually nothing works in Sierra Leone. Many of the countries’ ills stem from the failure of education and health care. This has nothing to do with the civil war or Ebola.   Teaching is no longer regarded as a vocation in Sierra Leone and educational standards have plummeted. Miners earn three times the salary of teachers, so this is one reason why you get teachers who are only half-trained. The government needs to invest in education in order to change attitudes. The private sector must help. Instead of complaining about the low quality of staff larger companies should invest in educational facilities that meet their needs.

RNP: Liberia’s Agenda for Transformation is a solid document. It can be adapted and used to deliver inclusive growth, decent work, a living wage and basic social services. Profit has been put above people and GDP growth rates ahead of human development. We cannot go back to where we were, we need people-driven and people-centred growth.

AD: It has taken over ten years for people to see Sierra Leone as a ‘post-war’ country, so to become a post-Ebola ‘investment opportunity’ will require a concerted effort. The role for the private sector and diaspora should be to build on the development plans we have already drawn up, like the Agenda for Prosperity.

BD: The government needs to decide what it wants to focus on and then guide the key sectors – no government can do everything. Guineans do not need more plans, they are tired of plans. It is time for action.

Comments attributed to the speakers are not direct quotations 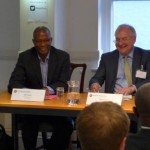 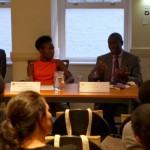 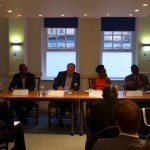 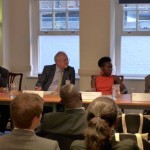 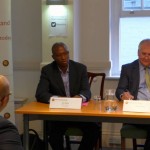 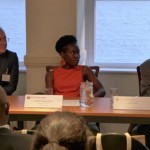