What Kenyans must demand of the next administration

This article is abridged from one that first appeared in the Business Daily and is reproduced by kind permission of the editors and the author.

The election year in Kenya is contextualised in two conflicting realities. On one hand, the country is among the fastest growing in Africa – and the world – and is successfully attracting investment. On the other, many companies have shut down or left the country, poverty and unemployment levels remain high and the cost of living continues to rise. How do we reconcile these two conflicting realities?

The first necessity is to acknowledge that the Kenyan economy is growing strongly: by 6.2% and 5.7% in the second and third quarters of 2016. Analysts point to several sectors which performed well: agriculture, forestry and fishing; transportation and storage; real estate; wholesale and retail trade; and mining and quarrying. Kenya was buffered from the decline of commodity prices and saved nearly KES 50 billion (US$500 million) in the first half of 2016 alone due to cheaper oil. Furthermore, the Kenya Shilling remained steady against major currencies, trading at around KES 100 to the US$. This is important for Kenya, an import economy: currency depreciation places upward pressure on inflation.

With regards to inflation, the country remained within the Central Bank of Kenya’s inflation target range of 5% plus or minus 2.5%. Annual average inflation dropped from 6.7% in November to 6.3% in December, although upward pressure has resumed. Kenya has also made progress in the World Bank’s Ease of Doing Business index, moving from 113 to 92 in 2015 (thereby ranking in the top 100 for the first time in seven years).

FDI Markets ranked Nairobi as Africa’s top foreign direct investment destination in 2015, with inflows surging by 37%. In the same year, FDI Intelligence indicates that a total of 84 separate projects were initiated in real estate, renewable and geothermal energy as well as roads and railways worth KES 102 billion (US$1 billion). Peugeot announced a contract to assemble vehicles, joining Volkswagen, which opened a plant last year in the country. Wrigley invested KES 5.8 billion (US$58 million) in a plant in Thika and a contract worth KES 18.74 billion (US$19 million) was signed with the French government to build Ruiru II dam.

However, all the rosy economic statistics are rather theoretical to the millions of Kenyans who are not feeling any positive impact. Media reports indicate that thousands of jobs were lost in 2016 due to company restructurings or closures. Six hundred jobs went when Sameer Africa announced that it would shut down its factory. Flourspar Mining Company also scaled down its operations with the loss of 700-2000 direct and indirect jobs. Oil and gas logistics firm Atlas Development wound up and the Nation Media group closed three of its radio stations and one television channel. Job losses were most pronounced in the banking sector, with more than six banks announcing retrenchment plans in 2016. How can economic growth be juxtaposed with massive lay-offs and widespread economic hardship?

With regards to the employment cuts in the banking sector, these are linked to two factors, the adoption of technology and the reintroduction of an interest rate cap. Millions of Kenyans no longer have to visit banks – they can withdraw and transfer money, apply for loans and pay bills digitally. The interest rate cap enforced by government, which stipulates that banks cannot charge interest rates higher than four percentage points above the Central Bank Rate, has placed pressure on the profit margins of banks, which have responded by cost-cutting.

Interest rate spreads have several functions for banks, of which perhaps the most important is insulating banks from bad borrowers. The creditworthiness of most Kenyans cannot be established. As a result, when banks make loans they often do not know if the borrower will be a good or bad one so higher rates were the norm to ensure that banks recovered as much money from borrowers in as short a time as possible. In removing this provision, the interest rate cap is essentially forcing banks to lend money to both good and bad borrowers at much the same rate.

The cap is having a more insidious effect on the economy than simply the loss of jobs in banking. A report by the IMF released last month states that it could reduce growth by around two percentage points each year in 2017 and 2018. Many SMEs and individuals that used to get loans, albeit at higher rates, are likely to get no credit at all. As they are shut out of credit, SMEs cannot implement growth plans and are unable to create jobs and wealth.

An informal economy and de-industrialisation

The informal sector is largely ignored

Another key main reason why few Kenyans feel the rosy economic statistics is because 80% of those who are employed operate in the informal economy, whose performance is generally not reflected in official statistics or Ease of Doing Business data. Indeed the informal sector is largely ignored: policies and action that could help the majority of working Kenyans are never developed or implemented. 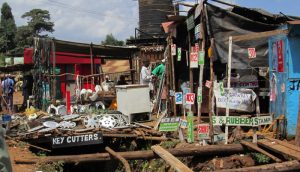 The country also seems to be in a “jobless growth” rut, where GDP growth doesn’t lead to formal job creation. This is partly because Kenya’s economic growth is services-driven, and services create far fewer jobs than manufacturing. In this country, manufacturing is under threat because the costs of doing business remain high, particularly with regards to electricity, transport, cross-county taxes and, frankly, corruption. Kenya is actually de-industrialising as the manufacturing sector grows at a slower rate than the economy as a whole. This should be a major concern for politicians. Until the manufacturing sector is given the attention it requires, and the economy is driven by export-led manufacturing, the jobless growth challenge will continue.

Exacerbating the already slow growth of manufacturing this year are the drought and cheap imports. As the Kenya Association of Manufacturers points out, the drought is having an impact on raw materials in sectors that rely on agricultural products and will lead to higher costs as electricity tariffs are adjusted upwards. The manufacturing sector is also threatened by the fact that the country has allowed cheap goods, particularly from Asia, to flood the market; goods that benefit from protection and subsidies in their home economies which is not reflected here.

Almost every week the media reports some new scandal

Finally, financial mismanagement at both national and county levels is compromising growth. Almost every week the media reports some new scandal. Too often, government funds that are meant to be economically productive and generate economic activity do not reach intended projects. Thus the economic stimulus that ought to be garnered from public money never happens because projects are either under-financed or not financed at all as public officials siphon off the money. Businesses routinely complain that bribes have become a basic expectation of county officials around the country. A report released in February 2017 by the Auditor General revealed that Kenyans have to pay bribes for services as a matter of course. Mombasa County officials topped the list of bribe-seekers, extracting KES 11,611 on average from residents, followed by Embu, Isiolo and Vihiga. As long as this continues, jobs and wealth that government investment and financing could have created will not materialise.

So what should Kenyans demand from those vying for power in this year’s general election? First and foremost, an end to gross financial mismanagement. Voters must demand a clear plan that will take serious steps to make financial structures more robust and punish those engaged in the misuse and abuse of public funds. Secondly, Kenyans should push for the government to provide a detailed analysis on the impact the interest rate cap is having on the economy. Thirdly, we must demand the development of a policy aimed at supporting and developing the informal economy. The complete neglect of this sector must end, given that it is in the informal economy that most Kenyans earn their living. Finally, Kenyans should push for a detailed plan for re-industrialisation. While the Ministry of Industry, Trade and Co-operatives has developed the Industrial Transformation Programme, a detailed work plan and timeline for implementation is still awaited.