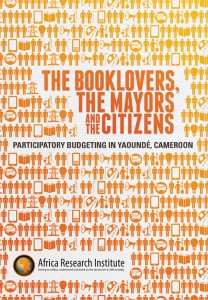 This paper examines how citizens, local mayors and a society of booklovers collaborated to establish participatory budgeting in Yaoundé, despite the weakness of democracy and absence of traditions of participation or public service in Cameroon.

Participatory Budgeting (PB) involves local authorities and the inhabitants of a municipality co-operating in determining the allocation of public money. Projects might include wells and standpipes, sanitation and sewerage works, street lighting, paving and roads, or housing.

In Cameroon, PB has been driven by the proliferation of civil society organisations that accompanied the slow, unsteady but unmistakeable shift towards decentralisation. Yet the central government still retains a tight grip on the most important levers of power, which means that local authorities have been given greater responsibility without a commensurate increase in resources.

By way of illustration, Yaoundé V, one of the Cameroonian capital’s municipalities, has a budget amounting to just €2.50 per resident. Within such a context, PB offers an opportunity to increase the impact of very limited financial resources by aligning policymaking with the most pressing local needs.

An important principle of PB is that communities must themselves contribute in some way – in cash, manpower, materials or land. This has the advantage of making the resources go further as well as promoting a sense of genuine local ownership of any new assets. If commitment dwindles, trust erodes, communication breaks down or expectations rise too high then residents may disown the process. Greater involvement strengthens accountability and support for projects.

Whether PB succeeds in a given setting depends in large part on the individuals involved, with a municipality’s mayor playing a crucial role. If a mayor is deterred by the need for reciprocity and transparency they can simply abandon the process midway. Alternatively, mayors can compromise PB by indulging in favouritism, leading people to dismiss the process as nothing more than “old politics dressed up in new clothes”.

Mayors aside, it cannot be taken for granted that residents will be interested in participating. A shortage of time and resources, especially among the poorest, presents a serious obstacle to overcoming mistrust of PB. Yet, given time and effort, participation rates can reach impressive levels. For example, in Yaoundé II, only 351 residents took part in the first PB cycle in 2009 but more than over 11,000 were involved by 2011. This rapid increase was the result of the mayor, residents and civil society organisations working together to build trust, as well as major awareness campaigns run in all neighbourhoods.

PB is neither a developmental “silver bullet” nor a universal panacea. But it can deliver much-needed public works in areas that have never previously benefited from state involvement. The benefits of PB also go beyond the material. In a city where entire neighbourhoods have been destroyed as part of “beautification” efforts, even a small project can confer a degree of legitimacy on an area and give residents “their right to live where they do”.