7 things to understand about elections in Ghana

Ghana is considered the beacon of democracy in Africa with two peaceful turnovers of power and no experience of widespread electoral violence. But ahead of the 7 December vote there are some areas of concern. There is a new, and untested, head of the electoral commission, Charlotte Osei; prevailing economic challenges include high youth unemployment and unsustainable debt levels; allegations of corruption and institutional weakness, particularly in the judiciary, persist.  Electricity outages continue to affect citizens on a daily basis. Nonetheless, even hotly disputed elections will not necessarily result in violence.

Here are 7 things to understand about Ghana’s elections.

Ethnic arrangements shape the electoral terrain, and programmatic and identity concerns influence voters’ behaviour – but campaigns win elections in Ghana. The New Patriotic Party’s (NPP) presidential aspirant, Nana Akufo-Addo, and the National Democratic Congress (NDC) of President John Mahama are running strong campaigns in 2016. Both candidates have used social media to reach out to voters, and have organised sophisticated political machines to get out the vote. Turnout for the 2012 presidential election was 79.4%.

The NDC, in government for eight years, has the edge. The party can access the state coffers to help fund its campaign and can point to the construction during its tenure of new highways, sports stadiums, and other modern infrastructure projects, particularly in urban centres. The NDC says it is “transforming Ghana” and campaign billboards project the glitz of a rapidly modernising and developing country.

In spite of internal divisions the NPP is still in with a chance. Since 1992, no party in Ghana has held power for more than two consecutive four-year terms. There is widespread anger at government corruption and the slow pace of improvements in peoples’ lives. Furthermore, Akufo-Addo seems to have learned from previous mistakes by spending more time at the grassroots rather than gallivanting around the world meeting global leaders.

This will be Akufo-Addo’s last shot at the presidency and the three-time candidate will not go down without a fight. Another loss would be disastrous for his Ga-Akyem faction in the NPP which would in all likelihood be superseded by the party’s Asante-Brong faction. 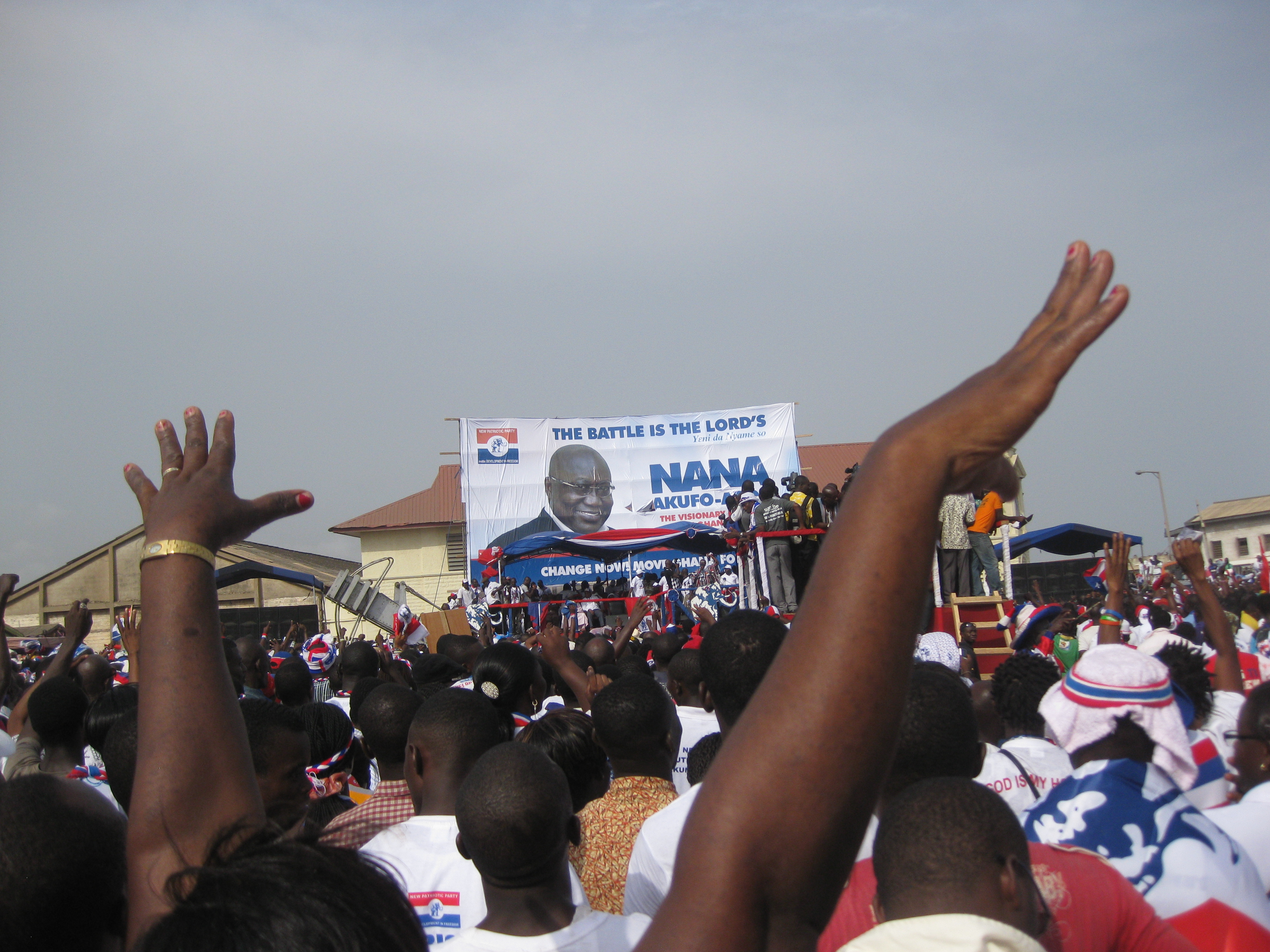 2.The future is local

As well as a new president, 275 MPs will be elected on 7 December. Local level politics are increasingly important, particularly in Ghana’s rapidly growing secondary cities. Sekondi-Takoradi has experienced a massive construction boom – and a housing crash – since oil was discovered offshore. Tamale is building an international airport. Kumasi has seen massive Chinese investment in the city itself and the mining and agricultural sectors in surrounding areas.

New district, metropolitan and municipal executives will be appointed by the winning president in many local government bodies. With control over development budgets and close ties to the leaders in their respective parties, these local officials will be the intermediaries between the grassroots and the central government. For development to accelerate and be more effective, district and municipal governments will have to lead in a way that makes them more accountable to their communities than to the politicians who appoint them, and less focused on self-enrichment.

Land grievances often underlie electoral violence. In Ghana, politicians do not have the ability to allocate or expropriate land. But chiefs do align with politicians and undermine the legal system. Rapid urban development has placed more pressure on the resources, such as they are, of towns and cities. An ongoing influx of migrants has contributed to land shortages and exacerbated insecurity of property rights. Towns like Bawku, and areas such as Dagbon, with underlying chieftaincy disputes are more susceptible to outbreaks of violence because of the relationship between land insecurity, political mobilisation and group conflict.

Resentment runs deep in Ghana and understanding the political ramifications is critical. Many Ghanaians resent the Ashanti ethnic group – the core support base of the NPP – due to its historical accumulation of money and power through alliances made with whites during the slave trade and colonial era. More recently, in the early 1970s, Prime Minister Kofi Busia’s Progress Party, an ideological forerunner of the NPP, deported tens, or possibly hundreds of thousands of “aliens” of Nigerian descent who had been living in the country for decades. Today, people with close ties to the deported – either through family, religious or civic bonds – resent the NPP party and will never vote for them. Many youth perceive the NPP as having an entrenched hierarchy and being “tribalistic”, offering little opportunity to newcomers for advancement.

Within the NPP, the NDC is resented for its legacy of authoritarianism. The NDC emerged out of the military regime that President Jerry Rawlings formed after his 1981 coup. For much of its existence, the NDC has struggled to make the transition from the military era. Many Ghanaians also think the Mahama administration has mismanaged an economy that was one of the fastest growing in the world in its early years, and that they should have benefited far more from the discovery of oil.

At the grassroots, the politics of resentment takes the shape of a charged “us versus them” contest. The best showing by a non-NDC or NPP presidential candidate in 2008 and 2012 was just 1.34% of the vote. 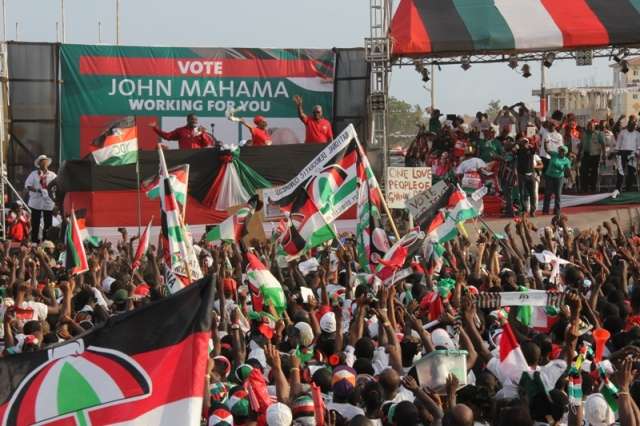 Ghana does have a history of low-intensity electoral violence and 54% of Ghanaians expect political parties to use violence during the 2016 elections. Fights between party foot soldiers have resulted in destruction of property and mini riots. This type of violence is often the outcome of exclusive forms of political mobilisation that are increasingly evident in cities. These exclusive strategies rely on narratives of indigeneity and coercion to intimidate voters who “do not belong”.

Parties rely on a variety of campaign strategies in order to maintain control of neighbourhoods. The parties use door-to-door campaigning and hold rallies in the various suburbs of the city, especially in poor neighborhoods and emigrant communities. They distribute campaign leaflets in the streets of Accra. Campaign adverts are run on local FM radio and private TV stations. Posters are placed on buildings, commercial vehicles and lampposts.

In highly competitive electoral districts, political parties use very different mobilisation strategies depending on the underlying ethnic composition and whether they have the advantages of incumbency. When an indigenous group comprises the ethnic majority of an electoral constituency, their political strategies are often exclusionary. Exclusive mobilisation strategies have the potential to become violent when a party also has incumbency advantage because its representatives can deploy private security without being sanctioned by the state.

Aspiring political leaders spend a long time building a following. Typically, they gain formal positions of power only after proving their credentials by serving their neighbourhoods for many years. Informal authority rests on “socially shared rules, usually unwritten, that are created, communicated and enforced outside of officially sanctioned channels”.

These rules both constrain and enable the behaviour of residents over time and transcend ethnicity, class and political affiliation. Leaders, including politicians and chiefs, build support by extending their social networks, accumulating wealth, being family heads and religious figures; they are friends, entrepreneurs, parents and preachers. Personal rule persists at the local level in Ghanaian society, despite the strengthening of formal democratic institutions.

Politicians make strategic calculations to gain the support of voters. They visit neighbourhoods to show solidarity with victims of fires and floods; distribute food and clothing to vulnerable populations, such as kayayei (head porters); attend “outdoorings”, funerals and weddings of local leaders; and pray with pastors and imams at local churches and mosques. Nii Lante Vanderpuye’s election as MP for Odododiodio in 2012 is illustrative of these informal practices.

Showing influence and possession of the financial resources to improve the lives of residents is increasingly important. Individuals and social groups receive private or “club” goods on the basis of their support for a political party or candidate. This relationship weakens issue-based pressure, allowing political elites to shy away from responding to major structural challenges, and greatly politicises development. It is for these reasons that elections matter so much for ordinary people: they are a winner-takes-all affair.

15.8 million Ghanaians have the right to vote on 7 December. The Center for Democratic Development compiled an informative pre-election survey of the electorate. 57% of voters said that they would endorse a parliamentary candidate who would make policies that benefit everyone in the country. The state of roads, electricity provision, the price of basic goods, and perceptions of corruption were the most important issues identified in the survey. Much less influential, according to the results, were religious, ethnic or patronage considerations.

The result of the presidential election will be close. In the last three contests the average margin of victory has been just 3.74%. In the parliamentary vote the NDC will seek to defend a slender 25 seat majority.

George M. Bob-Milliar is Senior Lecturer at the Department of History and Political Studies, Kwame Nkrumah University of Science and Technology, Kumasi, Ghana.

Jeffrey W. Paller is Assistant Professor of Politics at University of San Francisco