Africa’s Urban Revolution is both an ambitious title and an ambitious endeavour. Contained within just over 300 pages is a detailed account of the revolution – or revolutions – that are taking place across the continent. Rather than being political in nature, the titular revolution refers to an “urban transition” characterised by the dynamism of the continent’s cities. 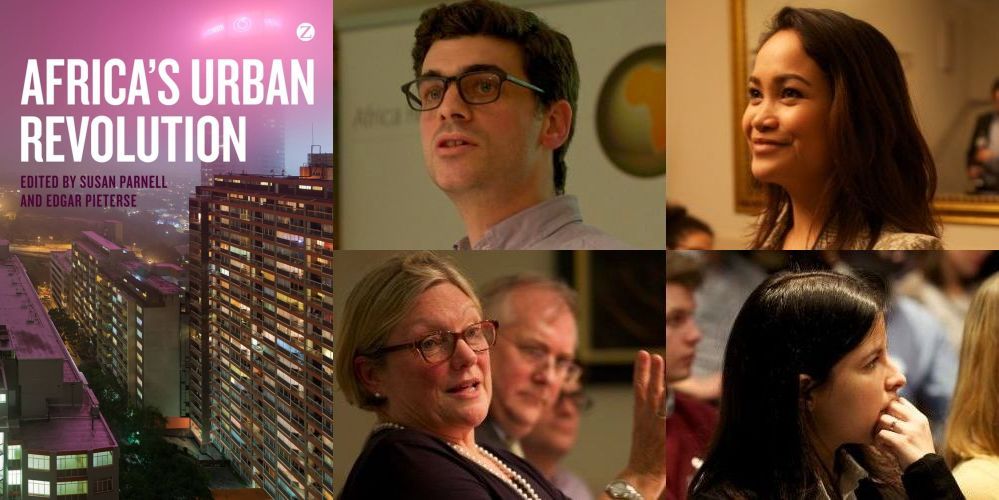 Edited by Susan Parnell and Edgar Pieterse of the African Centre for Cities, the book brings together perspectives from some 21 researchers and practitioners. The topics addressed are suitably diverse and include civic conflict, urban planning legislation, the role of religious organisations, food (in)security, economic growth and global warming.

The continent is 40 per cent urbanised at present, which means that there are 414 million African urbanites…Only Asia has more people living in cities.

The introductory chapter by Parnell and Pieterse sets a clear tone for the rest of the volume. “The continent is 40 per cent urbanised at present, which means that there are 414 million African urbanites…Only Asia has more people living in cities.” The United Nations Department of Economic and Social Affairs (UN DESA) forecasts that Africa will be 50 per cent urban by the early 2030s and 60 per cent urban by 2050. Africa’s fifty largest cities all have populations of over a million people. It is therefore imperative that domestic and international policymakers understand and adapt to the changing urban realities on the continent.

While Africa’s urban revolution is already well under way, the editors are at pains to stress that there can be no single, uniform understanding of “the African city”. The purpose of the collection is to identify common themes and trends that “frame and form the urban revolution”.

The exact nature and cause of urban growth in Africa are not uncontentious. Research by Deborah Potts, for example, which is cited in the collection, demonstrates that it is more the result of natural population increase than a tidal wave of rural-urban migration. This distinction between urban growth and the rate of urbanisation is picked up in a number of chapters and has important implications for policymakers. However, the book does not labour the point. The emphasis is squarely on the fact that rapidly growing urban spaces in Africa are not receiving the attention they deserve – and require.

A chapter by Jo Beall and Tom Goodfellow looks at the ways in which violence and war are played out in urban spaces. They note that whilst cities may become the loci of violence during times of conflict, they can also – on occasion – act as safe havens when warfare unfolds in rural areas, as was largely the case in Freetown during Sierra Leone’s civil war. Their contribution seeks to address a perceived gap in the study of contemporary warfare in Africa – an omission that stems, in part, from the misconception that conflicts on the continent predominantly take the form of rural-based rebellions.

In their chapter on food security, Jonathan Crush and Bruce Frayne argue convincingly that it is not food production which is the main challenge facing Africa’s growing urban-based population, but rather access to food. Feeding cities, they assert, will be a defining challenge for African governments – and donors – in the coming decades. The lack of an explicit focus on food security in cities and towns perpetuates a world view that hunger and malnutrition in Africa is primarily a rural problem – a misconception that Crush and Frayne seek to dispel.

As a contribution to scholarship, Africa’s Urban Revolution is a welcome and vital addition to a burgeoning field. If there were to be a criticism, it would concern the relative shortage of practical suggestions for “managing” the urban revolution. That said, the stated objective of the book is to draw attention to the growth of African cities and some of salient characteristics of that growth – in other words to frame issues rather than solve them – and this is achieved in a highly readable and engaging manner.

As Parnell and Pieterse note, “[I]increasing levels of urbanisation are probably inevitable and must be confronted”. The first imperative is to lay foundations for more considered, long-term and constructive understanding of African cities. Once there is better understanding and broader consensus on key issues, perhaps more coherent strategies for “confronting” the myriad challenges of the urban revolution – and exploiting the opportunities – can be adopted.

Africa’s Urban Revolution was launched at Africa Research Institute on 20th February in partnership with Zed Books. Click here for photos and more information about the event.