Tax in Africa: In conversation with Kieran Holmes

Kieran Holmes is Commissioner General of Burundi’s semi-autonomous revenue authority, the Office Burundais des Recettes. Kieran recently co-authored an ARI report detailing OBR’s efforts to reform tax collection and administration in one of Africa’s poorest nations (available either in English or French). In this interview with ARI’s Jonathan Bhalla, Kieran discusses how the OBR has become a model institution but still faces serious financial uncertainty despite its many successes. 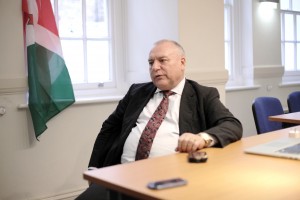 1. What was the state of revenue collection and administration when the civil war ended?

It was pretty weak. In 2009, the government collected just 301 billion Burundian Francs, or about US$124m. Revenue collection was fragmented between two separate administrations: the département d’impôts and the département de douanes, both in the ministry of finance. These departments had a high reputation for corruption. There was no co-ordination or sharing of information. As a result, very little revenue was collected.

2. What prompted the new approach to creating a semi-autonomous revenue authority in Burundi?

Burundi’s accession to the East African Community was the decisive factor. The government of Burundi knew that it had to harmonise its tax administration system in line with other East African Community (EAC) states if integration and the common market were to become a reality. Creating a semi-autonomous revenue administration (SARA) was one way of promoting tax harmonisation in the region.

The government also needed to raise more money from domestic sources. They were aware that SARAs had a good track record in East Africa of generating high levels of revenue, particularly in the early years of their creation.

3. What is the most important factor in raising revenue collection in a country like Burundi?

It’s about going back to basics. When we created the Office Burundais des Recettes (OBR), the first thing we did was to recruit entirely new staff and train them how to administer tax collection in line with international best practice. We recruited 425 new staff from 9,000 applications. This was the single most important thing we did. It put an entirely new stamp on tax collection and administration in Burundi.

At OBR, we established the highest possible standards from the outset. Staff are recruited on performance-based contracts. They can be dismissed in instances of corruption or persistent under performance. In the former tax administration, it was very difficult to part company with dishonest or incompetent staff.

4. Exemptions are currently equal in size to about 20% of revenue collected by OBR. What is the impact of this?

The latter category of exemptions is the most damaging. There is no economic rationale for discretionary exemptions. The assertion that such incentives will accelerate job creation is empirically unfounded. Furthermore, there is no evidence that the foreign investment attracted since 2010 was because of exemptions. There is a real danger that the state is giving away something for nothing.

5. Why was it important to change the way customs worked in Burundi?

One of OBR’s priorities is trade facilitation in East Africa. The government of Burundi has given high priority to deepening regional co-operation since becoming a full member of the EAC in 2007. The OBR is actively supporting the pursuit of this objective by working to reduce the time it takes for goods to pass through border posts and Bujumbura port.

Combating corruption at border crossings has been one of OBR’s greatest challenges. The imposition of customs duties occurs in real time and through a number of stages, all of which increase the potential for corruption. Furthermore, many people simply do not understand why they are required to pay customs duties or VAT, and complain vociferously about bribes at police checkpoints and other forms of extortion by customs officials and agents.

Customs is a complicated business, and even more so since joining the EAC. Goods within the EAC region are exempt from import tariffs and duties, though VAT still applies. Products from outside the EAC are subject to import tariffs unless a special arrangement is in place, such as a free-trade zone or bilateral trade agreement.

6. What can be done to bolster regional integration of tax collection?

We need to harmonise taxes. The tax base and rates of taxation in each country should be roughly the same. For example, the tax landscape in Burundi should look similar to that of Kenya. This prevents what has been coined “the race to the bottom”, where countries compete for investment by continually lowering rates of taxation. In addition, it is helpful to have a tax administration that is the same as other countries, and this is what Burundi has done through the creation of OBR.

7. What are some of the difficulties associated with tax harmonisation?

It is not easy, especially when negotiations take place between five governments. The problem is that you can have very different economic structures within the EAC. For example, one country’s economy might be dependent on natural resource extraction. They are going to have a keen interest in taxing returns on capital investments, such as dividends, interest, royalties, and management fees. But another country might want to start encouraging investment in the mining sector, for example, and would therefore like to offer zero or very low rates of taxation on such investments.

8. In what ways will the OBR seek to increase future revenue?

The mining sector will be an important source of revenue in future years. Burundi has a new mining code which was passed in October 2013. At OBR, we believe that this sector can generate a lot of revenue for the state. But, we are also trying to improve tax collection in the informal sector. For example, we have started with a campaign to get all small and medium companies to register as taxpayers. Some private businesses in Burundi pretend to be smaller than they actually are as a way of avoiding certain tax obligations.

9. Is there a link between more professional tax administration and collection, and transparency and accountability throughout government? If you make taxation more transparent, does it assist or set an example to other arms of government?

I am convinced this is the case. From my experience, OBR has had a noticeable – and positive –impact on other government agencies. For some people, OBR is regarded as a model institution. I hope there will come a time where everyone says “OK, I want to do better”.

10. Why do you think the support of tax authorities like OBR should be a priority for donors in coming years?

Consistent support to revenue authorities has produced an impressive record of raising government incomes in Africa. Burundi is just one case in point. But in order to build on these achievements, OBR needs the financial stability to make its own strategic decisions as defined in its 2013-2017 Corporate Plan. These objectives have been defined locally in conjunction with the Government of Burundi, and embraced by the international community.

My concern at the moment is that OBR will not be able to develop with the necessary autonomy to pursue these strategic needs and plans due to the financial uncertainly that currently surrounds the organisation. As I speak, the second phase of support to OBR has not been agreed. OBR’s current tranche of donor funding ends in 2014. This uncertainty is a real worry for the entire organisation.

Long term support to revenue authorities represents incredible value for money for donor organisations, and the OBR is the perfect illustration of this. The more governments in developing nations are financially secure, the less likely they are to be reliant on donors to fund social services and infrastructural development. Surely this should be the aim of all donor assistance?

For more information about the OBR’s progress, please read our Policy Voice: ‘For State and Citizen: Reforming Revenue Administration, in Burundi